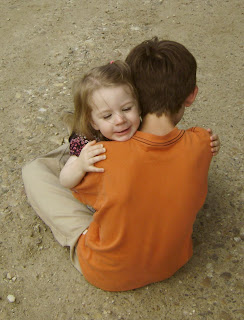 Well, that one Parent Visitation Day came and went. I do think summer months move faster than other months... anyway... we were SO excited to visit the kid. There was a mad rush of parents towards kids and kids towards parents. It resembled some battle scene from the movies, but with smiles and boxes of donuts and gifts instead of weapons. The baby was sitting on her daddy's shoulders and launched forward to hug her brother. She wouldn't let go!! When we finally got the two separated, and set the baby down, she rammed her brother to the ground and wrapped her arms around his neck!
These two have GOT to be my greatest masterpieces. sniff sniff. I know, it's corny. But so many people told me they were too far apart in age, they would resent each other, I was insane to start again now... blah blah blah!  When I think about it though, in my more confident days, all it really took was someone telling me I couldn't do something to seal the deal. "Oh really? I'll prove you wrong!" So, in my own twisted way, raising two kids (in this very strange world) who really, really enjoy each other and appreciate each other - is my way of saying "oh yah?! Watch me!!"

Posted by Sandy Steen Bartholomew at 7:37 PM No comments: