Art in the Olympics

Guest blogger for today: my son Alex, age 11. Actually, he had to write a "persuasive" paper and chose to write about Art in the Olympics. I thought it was a hoot! And he said it was fine if I posted it. I particularly love the last line!

From 1912-1948 artistic competitions were held in the Olympics. Events were in architecture, literature, music, painting and sculpture. These were cancelled however, due to the lack of preparation time and the non-professional rule which states that professional athletes and musicians weren’t allowed to compete in the Olympics. The Olympic viewers didn’t enjoy amateur art, so the whole contest was rejected. Now that the professionalism rule has been permanently abolished, I believe art should be re-introduced in the Olympics. Many people would enjoy its return, including artists, viewers, and the people responsible for the Olympics themselves.
First of all this would help the artists and musicians that are entering these competitions. A lot of artists do not have the fame they need to sell their work and need the chance to show the world what they can achieve. Radio and TV broadcasting makes Olympic athletes as well-known as a light in a darkroom. If someone local wanted to purchase one of their "Olympic-winning" pieces, the artist would be quite satisfied with themselves. But however happy this would make them, other people can be just as content.
Whether from TV or the real deal, Olympic viewers are served, too, especially if they're someone who doesn't watch the Olympics because they don't like sports. Or maybe an art collector that needs a competition that suits their needs. Maybe an artist to be inspired! An art collector could find the artist and and purchase their work. But however rich the artists are getting, and however close to completion collectors collections are getting, and however much citizen are watching TV, there are people who might just be the happiest of them all.
The Olympic managers! With more people to watch the new addition, they get a massive budget-boost! All the money could be used to pay for some of next years Olympics. Plus the point of the Olympics is international cooperation. if you add more to the Olympic games, it just means more cooperation. Along that note, Olympic workers can come in contact with more people they'd like to know. Instead of just athletes they can meet artists and musicians too. Olympic workers would love an artistic addition to the Olympics.
If artists are too timid to make themselves known within their own states or provinces, they might not enter a worldwide Olympics. They might not think they are important enough to bother with a circumnavigating flight. A simple solution would be to have state-wide competitions that would lead to a regional, to an national, and then to the Olympics. This could lure them from their caves and decrease the number of competitors. Another matter includes the objection that it would make the Olympics longer and more boring. THIS IS NONSENSE!!! The Artistic Olympics could be placed in between the Summer and Winter Olympics. They could be prepared for in an Olympic-like fashion in a completely different country and city. The other opposition is that art is too subjective to be properly judged. This is probably true, however so is judging a criminal on trial. A panel of average citizens representing the competing countries would be randomly picked for a jury. As of these requirements, art would be quite an enjoyable plan.
As you see here, I believe that everyone can withdraw some joy from the addition of art to the Olympics. When this act follows through, a beautiful art piece that would've been lost for eternity can now fall into the gaping jaws of human necessity.
Posted by Sandy Steen Bartholomew at 7:11 PM No comments: 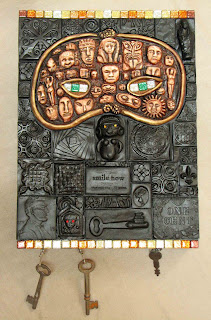 I have work up at the Mill Brook Gallery in Concord, NH and at Interior Additions (also in Concord). Both are shows for the WCA/NH (Women's Caucus for Art) and both run through the middle of December. The Mill Brook Show is called "Vision Keepers" and the IA show is our annual 6x6 Show (all works 6" square and $66). 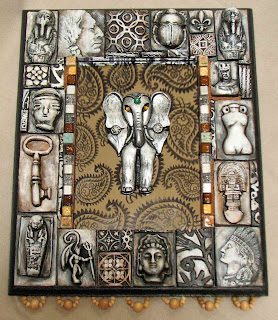 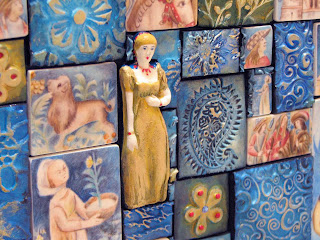 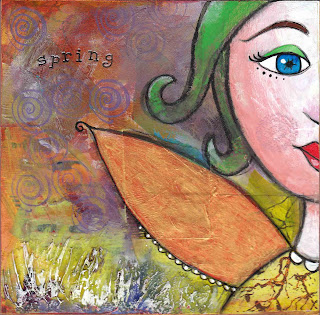 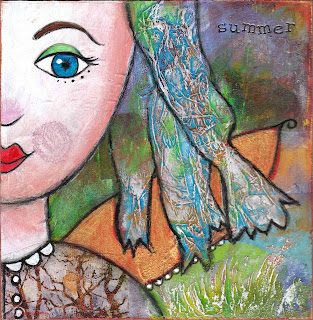 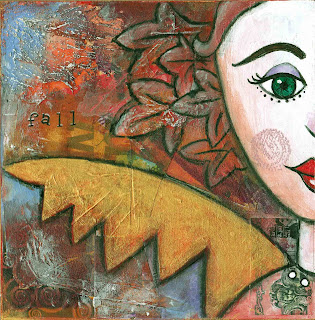 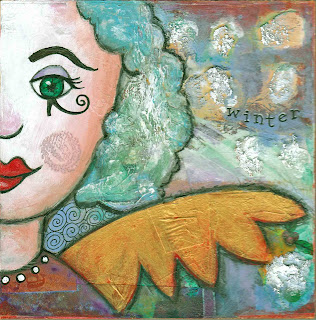 These pieces are all available for purchase from the galleries (mosaics - Mill Brook, Time Fairy collages - Interior Additions)
Posted by Sandy Steen Bartholomew at 3:34 PM No comments:

Halloween is not only my favorite holiday, but it is also my wedding anniversary. Sixteen years. Amazing. Why did I think that this would be a good day to have an anniversary? We get hundreds of kids banging on our door and any idea of celebrating on our own goes kablooey. I LOVE carving pumpkins and trick-or-treating, but the idea of asking neighbors for candy has always felt weird to me. My son and I started the tradition of handing out our own treats, house to house, and now my daughter is getting in on the fun too. This year, my son drew a whole bunch of adorable, spooky bookmarks and we attached little chenille spiders to them as tassels. Some of the neighbors claim they have collected all his gifts over the years!

I didn't get to carve a pumpkin this year, so here is a drawing of one from last year: 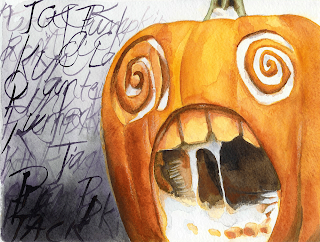 I got to dress up for a costume party too, this year - and I stumbled across my alter-ego. I was sort-of a darke faerie, but with a better sense of humor! I played with the photos my husband took, in Photoshop and decided that this is what "Sakhmet" would look like: 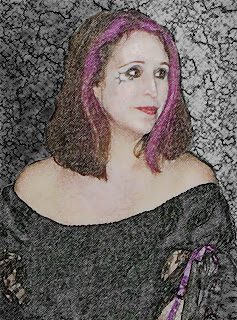 Perhaps it is time to have a mid-life rebellion? Well, maybe this Spring, when I'm not so tired!
Posted by Sandy Steen Bartholomew at 3:17 PM No comments: