Meanwhile, I've also been trying to plan this new business and get ready for the Open Studio. My business is still the same name "BEEZink Studio". But it seemed like this new space called for a new name. So I took the nickname that has developed (from this blog's name) and created a logo - and a character. I always like to make new characters!

My goal is to officially open on Valentine's Day and things feel like they are getting a bit close!
I'll have a free heart carving workshop to entertain anyone who might show up. Well, not hearts - I mean, we're not carving hearts. Not real ones. That's sick. It's eraser carving, make-your-own rubber stamps. It's fun.
Posted by Sandy Steen Bartholomew at 4:11 PM No comments:

I've repainted the yellow walls in the studio, painted some storage furniture, filled the cracks between plywood floorboards and sanded and primed... whew! So, just to up the challenge, I decided to try and sort-of match the kitchen floor tiles on the new plywooded area. (See the"before" image in the previous post). Half way through I thought - "what idiot tries to "faux finish" a kitchen floor to look like old, dirty linoleum?" I mean, honestly, have you EVER seen that technique in a book? 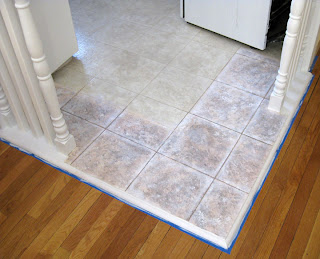 Hmmm, maybe a little too grungy. What do you think? Anyway, this is how it will stay. But if I don't completely melt down my brain while painting the railings, maybe I'll paint an object or something on the floor. Perhaps a dirty tissue or used diaper? To remind me of home (ha ha). 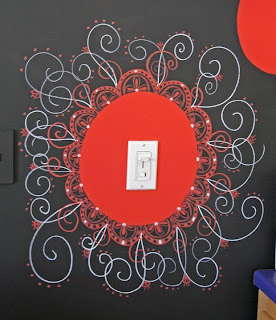 Then, I started Zentangling the kitchen wall. I LOVE these chalk markers. Too cool. And I bought all the colors available in the store. I like having the full box of crayons. Although... I don't actually like crayons...
Posted by Sandy Steen Bartholomew at 4:00 PM No comments:

When Life Gives You Snow...

Snow, snow and more snow. BUT! The sun was out and as I walked along Main Street, I was cheered to hear the gentle sound of dripping. Dripping! Dripping meant it wasn't as cold. Heatwave! This is a picture out my studio window before yesterday's snowstorm. That overhang of snow came down last night, a few inches from my snow-blowing-husband! Now, there is twice as much snow and the snow ledges are enormous, melting, icicles. 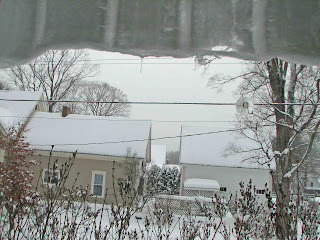 And when life gives you icicles... 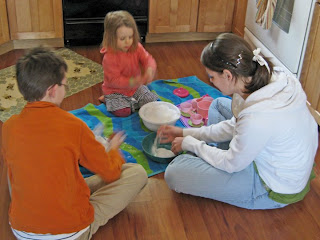 Alex put maple syrup on his snow! Yummy! No, really, I dare you to try it - it's that good! 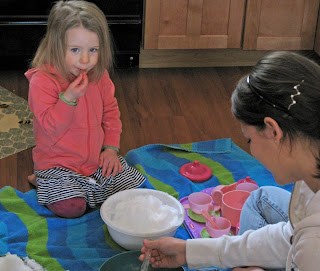 And here is a really good reason to fight pollution!
But the alternative was an icicle stuck to the bottom of the car! How gross is that? The ones over the front door seemed a bit cleaner.
Posted by Sandy Steen Bartholomew at 3:41 PM No comments: 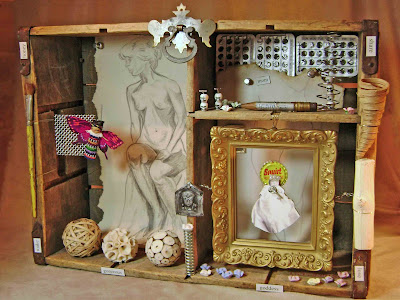 I made this piece for a show at the NH Institute of Art. I didn't get accepted, but I was glad to have the motivation to create something new! Ironically, the show is called "Figure It Out" - and I couldn't quite figure it out! Abstract, expressionistic nudes are not really my thing. But this piece was a blast! It's called "Create/Creation" and I was thinking about the female form as two, almost opposite objects. So one side has the artistic form and the other side has the creation, or mother-y, side. 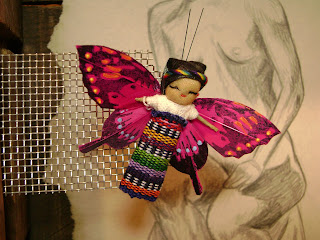 This is a close-up of one of my favorite parts. I altered a large "worry doll". Perhaps a worried muse? :-) Who knows?
Posted by Sandy Steen Bartholomew at 6:35 PM 2 comments:

Have I mentioned (lately) that I have a... rather dramatic son? If I call him a drama King, he says "I prefer dramatically gifted." 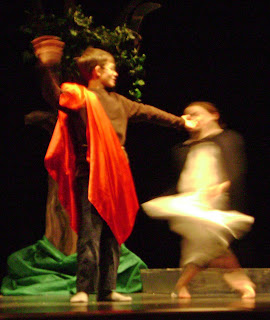 He was recently in a play called "A Midsummer Night's Midterm". Not only a take-off on Shakespeare, but it attempts to explain it (very funny) to kids. My English teachers will be horrified, but I've never liked Shakespeare. Actually, I can't stand it. No, not completely true - I adore the Reduced Shakespeare Company's productions of just about anything. 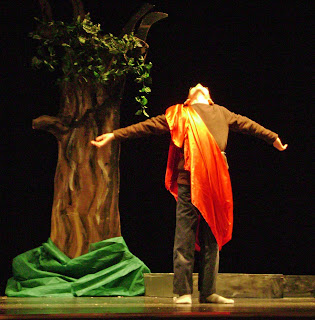 Most kids, myself included, stand awkwardly on the stage or shuffle feet and can't wait to get off the stage. My kid eats up the attention. Which is very strange, since he is almost as much of an introvert as I am! How can this be? At what point do we notice what our parents and teachers, etc are saying about us... and believe it? "Oh, she's the quiet one/ the good one/ the brain/ the artist..." My son refuses to fit into any neat categories. He'll "be" anyone on stage, but he won't dress up in a costume for Halloween - at school. At home, he makes his own costume and hams it up as we trick-or-treat with his little sister.

When he and his dad clash, I notice it's usually over expectations. His dad has them. Alex doesn't. Clash. I'm learning that you really can't assume anything about kids. It's kind of a relief too. I've always believed that you get what you expect. Maybe I expect too much from my kids, but I like them, so far.
Posted by Sandy Steen Bartholomew at 6:04 PM No comments: 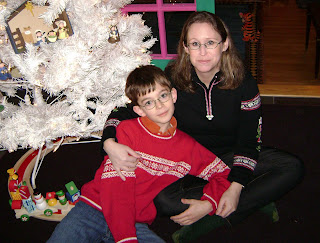 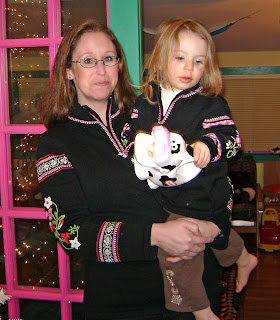 Yes, the baby and I have matching sweaters! Who would have thought?

Well, there is a bright side to the messed up economic situation.
Shopping! lots of companies that "never have sales" are having some pretty awesome sales. Hanna Anderson is one of my favorite kids' clothing companies, but I never seem to be able to afford the stuff.
A "Sweater Sale"?
Yeah - "me too, me too!" 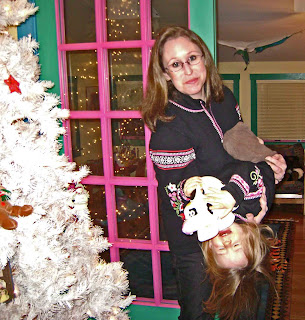 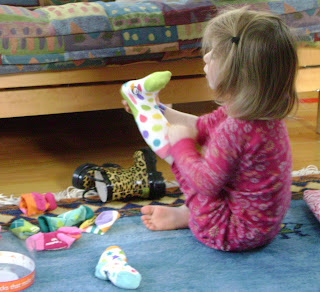 Isn't it weird what kids love as gifts? Yeh, the cardboard box and ribbons... how about a tub of mismatched socks? No, not your first guess? She tried them on (and off) for almost 45 minutes!
Posted by Sandy Steen Bartholomew at 5:43 PM No comments:

And we're off! Really.

I haven't posted in a month, because I've actually been working on this project! Yeah!
Here's a shot of the Lobby bathroom, painted: 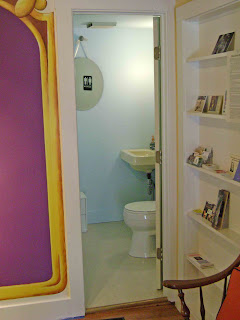 We actually divided up the old (tiny) bathroom and made a second (teenier) bathroom in my studio section. it's nice to have a private WC, even if it is just a hole in the floor. My son gets a real kick out of my bathroom stories from around the world... perhaps another blog. 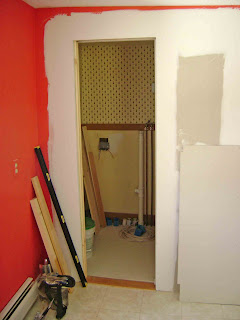 Oh! Yes, we put in a pocket door too. This bathroom is so tiny you sit on the loo with your knees to the wall! No skipping in the loo, here.


I couldn't bear to paint over the old red walls in the kitchen, so I only painted the walls that were damaged by construction. 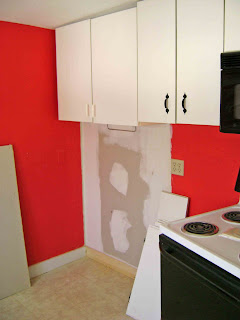 I used black chalkboard paint. I really love chalkboards! (And white boards, and glow-in-the-dark paint...)
I left patches of red - I might Zentangle them later. 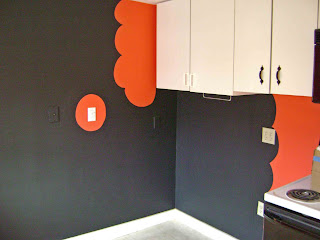 Originally, there was a big-ass counter separating the kitchen from the classroom. I'm not kidding! It was extremely "sturdy" and when it was finally removed, it left a foot wide gap in the floor (you could see the supporting beams). Jack (the builder) leveled it as well as he could with plywood, but was afraid, people (me!) would trip over the edge. So we designed it to look like a little porch with railings. Cute. 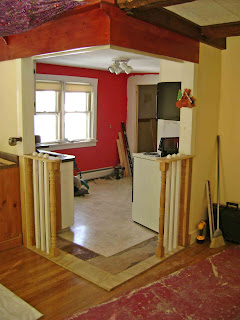 So far, so good. But then if you turn around... you see piles and piles of boxes that have been sitting around under lots of plaster dust. Ah well, time to start cleaning and unpacking! 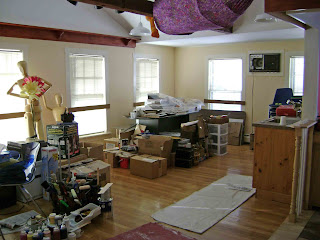 Years ago, my son and I were waiting to cross a street in Santa Monica and I noticed an "Obey" (Andre the Giant sticker) on the crosswalk light pole.
"Alex! I went to school with that kid!"
"He's ugly", said Alex.
"No - that's Andre the Giant, I went to school with the artist who made the image."
He wasn't impressed.
When we repeated this conversation in relation to the Obama "Hope" sticker on his daddy's car, he was a little more impressed. When a similar image showed up on the cover of time magazine, even my husband was heard saying, "Mommy went to school with this artist!"
And now, "The Colbert Report"! How cool is that?
(See it on YouTube: http://www.youtube.com/watch?v=QZAhn5nMNB4 )

Basically, I like my life. And I think I'm doing OK. But I have to admit that when a former classmate gets lots of press, I not only feel a little jealousy - I start doubting myself.
Another classmate is a very successful children's book illustrator. She had a book accepted before we even graduated! Whenever I see a new book by her in Borders, again... jealousy.

I can't figure out how we develop these levels of success in our heads? When I was 15, I decided I wanted to be Indiana Jones... and a children's book writer and illustrator. I took classes, went to conferences, sent off book dummies, and then went to college to study Egyptology and archaeology. I went to Egypt twice, came very close, a few times, to getting my manuscripts published, started, then sold a popular rubber stamp company, survived a major illness, opened a very cool, unusual shop, and had two healthy kids (against medical advice). Success, right? So why do I feel like a failure when I read alumni newsletters? How can I hold myself to a standard that I don't even think about normally?
Posted by Sandy Steen Bartholomew at 4:49 PM No comments: