There are a few really fun benefits to owning a 12 year old boy who adores Star Wars. Really!! Here's one: Alex's grandparents gave him three tickets to the "Star Wars in Concert" show at the Verizon Center as his birthday present. And he let me have one of the tickets. This show was so amazing the only words I can think of to describe it are...  laser beams, fog machines, pillars of fire, 3-story screen, C-3PO (well, the actor, actually). Star Wars music is like cartoon music - the old cartoons. You don't realize you are listening or affected by it, but it is in your blood. The orchestra plays the first few notes of the piece and you KNOW who will appear on the screen. Big, black and brooding. His creepy breathing. Darth Vader is the scariest character alive. I'm sorry, but Darth Maul is  no match. What's a little make-up (OK, a LOT of makeup) and a few horns (double light saber is cool though...). As kids, we watched all those movies, not understanding the complicated politics or relationships or even WHY Vader was the way he was. And we loved the characters as if they were our family. Princess Leia was and is the most kick-butt princess ever. Amidala just flits around trying to balance her complicated hairstyles... But this concert gave me new respect for her too. And now I need to do what my son has been telling me to do for years... go and watch ALL the movies in the correct order. The new ones never made sense to me because they seemed backwards. But hearing the story, simplified and in order with the compelling music, OK, time to do it all again. I hope I didn't annoy Alex last night when I whispered things like, "That movie came out when I was seven!" or "Oh! That one came out when I was YOUR age!" Man, I'm old. But I did notice that 75% of the audience was my generation and 25% was Alex's or younger. And this was the only concert in my life where the mini-vans cheerfully let me back out into the patiently waiting parking garage traffic. The Force was with us. 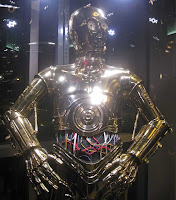 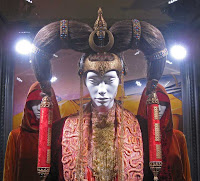 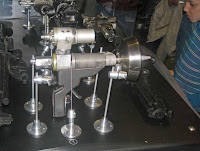 (There was an incredible display of costumes and special effects outside the arena!)
Posted by Sandy Steen Bartholomew at 1:22 PM