Anyone who has been following this blog for awhile, or has read Totally Tangled (is there anyone out there who hasn't?!) has "met" Shelley (see page 46). And as you can see from this photo, Shelley is one of the world's biggest Zentangle® addicts. She has filled countless journals and accordian sketchbooks with her designs.  When I first taught her how to tangle, she was at first resistant because she didn't "do anything artsy". But as soon as she saw her first finished tile, she was hooked! She's gone through her various color phases too - her blue period and green periods... where she adds in a bit of those colors. I think of Shelley as the poster-child of Zentangle. She's the perfect student too. I find that people who don't know they can do creative stuff, are much easier to teach and usually come up with the coolest variations. Also Shelley has a wicked sense of humor and she works in my store, Wingdoodle (in the background of the photo). 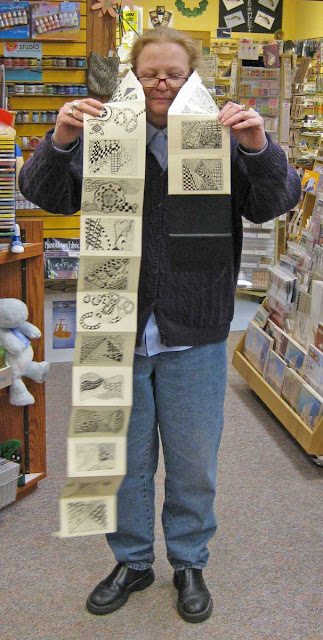 So now that we have established that Shelley is cool... I want to ask for your help! This spring she was diagnosed with lung cancer and has gone through all the chemo and radiation and just when things seemed to be looking a bit brighter, all systems crashed. Shelley's in the hospital again and things are looking grim. Throughout everything she kept tangling. She filled quite a few sketchbooks in the waiting room and the treatment rooms and she has been pushing me to teach the other patients and write a book for them to use in the waiting rooms! But now that she is so sick, she doesn't even want visitors and I don't know if she is still able to draw. She's needs Zentangle more than ever!

If you would like to create a Tangle for Shelley, you can mail it to the store at:

and we'll get it to her.

It would mean the world to her to know we are all rooting for her. Thanks folks.
Posted by Sandy Steen Bartholomew at 6:09 PM