Shelley was part of a round-robin challenge that 12 artists, mostly from the Womens Caucus for Art, completed this Spring. We worked in Moleskine accordian sketchbooks

and each artist set their own rules for the string and other requirements. In my book, I asked everyone to work off a wavy string that ran through the entire book, and then to incorporate some text. I had just gotten my book back last week, so I have not had a chance to study it carefully. But while I was searching for inspiration for the urn, I pulled out the little book and hunted down Shelley's page. Here is what I found:
I was so overwhelmed with how terribly appropriate her quote was! I asked a local business (All Signs) if they could blow it up for me. Even though they are drowning in Holiday rush jobs, Steve, the owner, had it done before dinner (Thanks!!!). I mounted it on fome-cor and it was displayed on the altar, behind Shelley's urn, at the funeral today. By the way, I learned that Shelley had even converted her husband, Ken, to Zentangle! Ken looks like a member of ZZ Top - and I kept wondering what the "ZZ"'s stand for. Completely irrelevant, I know. But I was not the only tangle addict there who was distracted by the great pattern-challenges on the chairs in the funeral parlor... the rug... a few ties... a dress...

Anyway. Shelley's quote was perfect. Today was a glorious (cold) sunshine-y day. There were tons of beautiful flowers. And, there was freedom.
Posted by Sandy Steen Bartholomew at 9:14 PM 4 comments:

So here is what I did. I used Shelley's "Heartlines" and "Alice" (from Totally Tangled).
It was super-glossy so - difficult to photograph! 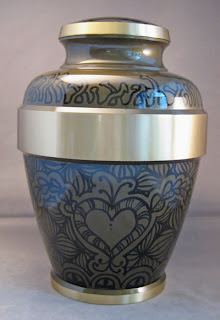 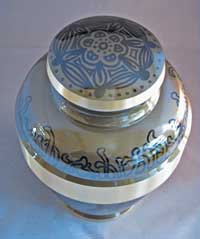 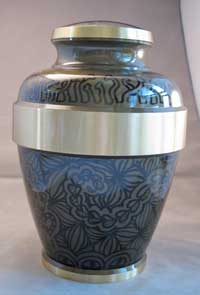 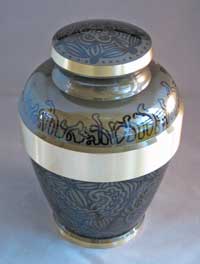 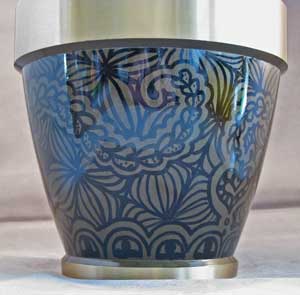 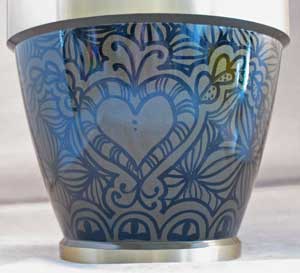 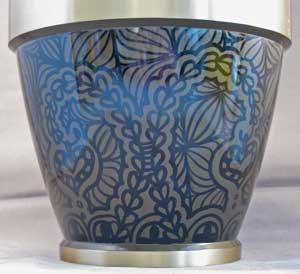 Not Quite What I was Thinking

In the new book, which will be called Yoga for Your Brain, I have a little section on using Zentangle for praying. Or, directed meditation, if you prefer. I use the example of wanting to think about a sick friend and stay focused on praying for good things for her. You all will know immediately, when you see it, that I was thinking of Shelley when I drew my example. I use an image of the person and words integrated into the Zentangle and there is a very good reason for this. If you just tangle, your thoughts WILL stray. The images and words keep bringing you back to your subject.

I just proved this theory to myself.

You all know me as the strange artist who will tangle on anything. When I went to the first ZT certification workshop I was one of five ladies there who were tangling a gnu. I've tangled furniture, floors, walls, clothing, sneakers, skin... and tonight I tangled an urn.

I kept reminding myself that Shelley was not IN it... yet. But it was such a strange experience. I wanted her to like it! I kept thinking about her and what she would be saying. I have never been so afraid of messing up. This shiny fancy futuristic... probably expensive... permanent resting place... who was I to DRAW on it. I still get shivers. Perhaps it was the subtle fumes from the markers... but all the people who have died or left me in the past year or so joined up with Shelley in my head. You know that  prickly adrenaline rush sensation that you get when you go a little too fast around a curve? That's what a panic attack feels like when it starts, but I kept getting that feeling with an intense rush of sadness. The urn was very shiny and slippery and it was hard to keep control of the pen as my hand kept getting shaky and slippery too!

There seem to have been too many deaths lately. But I have always had a sort of obsession with graveyards. Perhaps because I grew up in the Adams Family, I have a skewed vision of what is considered an appropriate form of grieving (party in the graveyard?) So, I guess it is appropriate that I was asked to tangle an urn. And I think that Shelley will like it. I used her tangles "Alice" and "Heartlines" as the main designs. But, my point is, tangling an urn is not relaxing. Or meditative. There is a VERY good reason that Rick and Maria developed those little squares of paper the way they did! If you are focusing on, or distracted by, the materials you are using... or the outcome you expect... Zentangle will fail to work it's magic.
And don't tangle with death! (ooh that would make a good t-shirt!?

I'll post a picture of the urn tomorrow when it is not quite so dark.
Posted by Sandy Steen Bartholomew at 11:26 PM 5 comments: 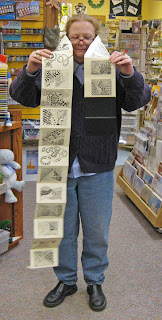 I've never been very good at saying the right thing or even knowing what to say in sad or awkward situations. But a lot of you knew Shelley through Totally Tangled, this blog, or through Wingdoodle. When I asked for Zentangles for her - I couldn't believe how many of you responded. So, you deserve to know that Shelley passed away this morning.

I saw her last on Thanksgiving. I felt guilty when I learned that she was back in the hospital and I hadn't known. I keep getting distracted by... myself. :-( I was also reluctant to visit a hospital - they terrify me. But my mother and I spent a few hours chatting with her and then ate our Thanksgiving Dinner in the hospital cafeteria. She was very swollen from chemo and drugs and I had to stifle my shock when I saw her. But she was still Shelley and she made jokes and was her usual optimistic self. She related, with some pride, the "episode" she'd had the night before which involved her heart and a lot of chaos. I had been worried about what we could talk about, but she was eager to hear stories about the store and my soap opera tales of divorce. I was shocked at one point, that we were actually having fun!

When she talked about her plans to take classes and how she wanted to go to Art & Soul this spring to help me teach - I almost burst into tears. The only thing that seemed to disappoint Shelley about her situation was that the hospital wouldn't let her go home for Thanksgiving. As we left, my mom said that Shelley was in heart failure, and denial. I argued that being positive is not the same as denial. I couldn't argue the heart failure.

She didn't get to go home. But I did hear from a friend that on her good days, Shelley was teaching the nurses and patients how to create Zentangles!!

I can't quite get my head around the fact that she is gone. Just not HERE anymore. I'm glad she is in the book. That sounds so stupid, I know. But Shelley was like a big sister to me - she even scolded me sometimes! She never thought of herself as an artist, but took to Zentangle like a fiend. She pushed me to teach classes... she pushed me into a lot of things! But when she saw her tangles and her artwork in Totally Tangled, she said she'd never expected to be published. That was a knock to the side of the head. Have you ever had a hand in making someone else's dream come true? It's a confidence booster, sure, but it's also extremely humbling.

I  had been thinking of doing a little book, like AlphaTangle, called Tangles for Shelley, with the art that you all sent in. The profits would go to buy Zentangle supplies to use at the hospital. But it seems a little... pointless now that she is gone. I have to do something. That's just my way. But maybe doing a little workbook that the hospitals could actually use with patients...? I have to think on it. But I do welcome input and ideas. I know you all have experience with cancers, hospitals, loss - and recovery too. It is easy to forget when you are steeping in it - that life isn't always about loss.

I DO know that Shelley would have liked to have an art party in her honor. She wouldn't want everyone sitting in pews crying over her. She'd want people making things (Zentangles!) and eating fantastically delicious food and... lots of laughter. Hmmm...

The perfect gift for the Zentangle Addict! My sneakers are on sale for $69 (regularly $79) this week only at www.zazzle.com. Be sure to check the Zazzle specials, as they change everyday (like free shipping!)