"Should She Take Ken Back?"

I get to see some really... "out there" advertising since I read Licensing and Toy Retailer magazines for my store. But I almost peed my pants laughing when I saw this one in "Toys and Family Entertainment" magazine. It ran for many, many pages and even had a place you could text in your vote for what poor Barbie should do. In case you aren't up on the soap opera, Barbie and Ken started dating in 1961. I owned the 1978 Superstar Barbie in glam pink poly and the Looking-Good Ken with stick-on mustaches. We melted him. My sister had the Malibu Ken - we broke off his head. Ken was Barbie's top fashion accessory until 2004, when she left him. He's had seven years to stew, to come to his senses, and realize that he may have a tiny "TM" after his name, but "Barbie" has always been the real thing. Now he wants her back! 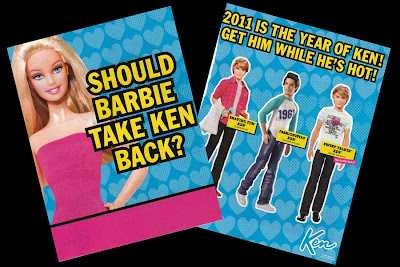 "Should Barbie Take Ken Back?"

Listen up girlfriend!! You are tall, blonde, super sexy and you have even been a rocket scientist. An astronaut, a teacher, a vet, Wonder Woman, Cleopatra, for goodness sake... you are so much MORE than just a fashion model. You're a role model. You are what every little girl dreams of being when she grows up (despite the fact that our mothers are ashamed they let us play with such an unrealistic, unhealthy role model).

ANYWAY, you are powerful and can (and have been) anything you want to be. Not to mention, you are WAY over... ahem... 20 years old. And look at him... Ken is half the age of that guy you dated in the 70's and 80's. (Click on the picture and take a closer look!) Ken is barely 16 years old! Barbie, you deserve a real man. Just say "no"!
Posted by Sandy Steen Bartholomew at 8:15 PM