Well, I asked if anyone wanted to help tangle the stairs up to my studio... and I admit I was afraid no one would show. Silly me!

It took us a while to get started, chatting, lunch and all that. But everyone was a little nervous to actually DRAW on the wall. So I followed the usual Zentangle® steps and drew a string, in pencil, down the entire wall! Strings are a real "ice-breaker." I suggested everyone start with some kind of Crescent Moon variety along the railing trim and then grow out from there. After that, everyone just took off. It was incredible how fast the time went! And we had quite a few curious visitors who peeked in from the store (Wingdoodle) to see what we were up to. 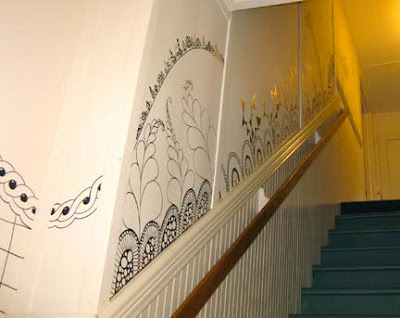 It looks pretty good, doesn't it? I just realized that we had one person for each of the sections of the wall! There's still so much to add - we have to finish these sections, then there's the other side of the stairs... and I was thinking the tangles should go around the door and into the store... and then we need shading...

Want to come and tangle, too? I'll be at it again on Tuesday, August 30th and Saturday, September 10th, from 1pm on - join me!  The Belfry is above Wingdoodle at 19 E. Main Street in Warner, NH

[OH! and in a completely unrelated tangent - Wingdoodle is having a huge (40% off!) sale this coming weekend (Aug. 27 & 28) to clear out a bunch of stuff, like leather purses and craft kits, DIY vinyl figures - that kind of stuff. Wingdoodle doesn't have many sales (like, two!) so, just thought you might like to know that!]
Posted by Sandy Steen Bartholomew at 10:36 PM