On the way to LaLa Land

Isn't it amazing how things can seem to go wrong, and yet fate or serendipity is really working over time?

Snowstorms kept schools closed the day we flew out and also caused delays for the flights coming in to the airport. Before we had even left the ground we realized we would miss our connecting flight in Detroit! Our replacement flight was a few hours later so we explored the airport. It's actually quite a lovely airport! I was surprised. There was an underground people mover that changed colors and played relaxing sounds like the one in the Chicago airport. And there was the most amazing choreographed fountain! It would go really quiet so the surface appeared flat, then shoot thin streams of water that looked like clear plastic tubes. All the water ran over the sides like an infinity pool (is that the right name?) we stood there mesmerized and then the streams of water started shooting in little bursts across the fountain! It was insanely magical!

When we finally boarded the plane to LAX, the lady who had been seated in the third seat grabbed her stuff and moved to the back where her friend was seated. I was absorbed in my book and paid no attention as a passenger seated herself next to me. Hours later, I looked up and we started chatting. "where are you headed?" "to Anaheim for a convention...." "me too!" and the coincidences continued as I learned that she was there because of a guest blog post I had done for Creative Imaginations using Twinkling H2Os and her product, Pearl Pens from Viva. So she was exhibiting at the CI booth. I think we talked non-stop until we landed! She asked me to create some samples for her other products. Fun!

And to think, if we hadn't missed our connecting flight, we wouldn't have seen the cool stuff at the Detroit airport or met this really amazing lady! 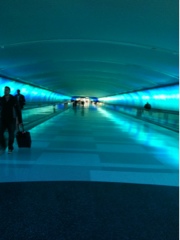 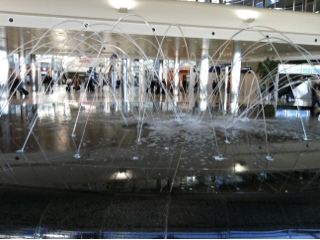