Just scrape me off the floor

The picture of me spread eagle on my bed kind of sums up the day! I had a fabulous time demoing and talking (talking!) to people in the Design Originals booth, keeled over, for ten minutes on my bed, then headed out to PF Changs for dinner with all the CZTs. It was loud and exciting and I am completely overwhelmed by all the ideas and conversations in my head now!

And during the day, too - it was rather amazing the people I ran into! Flashes from the past. My rubber stamp past. Maria from Another Stamp Company, then Ana Araujo- who had been with Limited Edition Stamps and now she is producing what sounds like an amazing online craft television show called When Creativity Knocks. She said I have to be on her show, which would be really cool, but absolutely terrifying! I seriously have to learn to be in front of the camera. Suzanne McNeill filmed me today doing my demo and that will be on YouTube. I think she enjoys torturing me, but I felt so relieved when that was done that the demoing seemed like a piece of cake. And then another friend from the past was Robin Beam, the Stamping Machine. Now she is a VIP with AC Moore doing all the education stuff. Her job sounds perfect for her. Oh, and there's a pic of Claudine Helmuth doing her demo at the Ranger booth. She's pretty cool too. I didn't get a chance to take any pics of the body art girl, bummer.

Lastly, there's a really boring, mostly whitish picture. Do you see it? That's my purse hanging inside a bathroom stall. If you look closely, you'll see a small QR code? I had been amazed at the lack of graffiti in the public bathrooms, but I guess in S. California even the vandals are so sophisticated... I was curious if I aimed my iPhone at the QR code would it read "for a good time call Jazzy at 123-4567"? 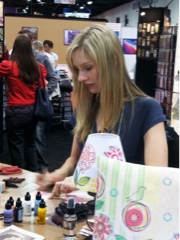 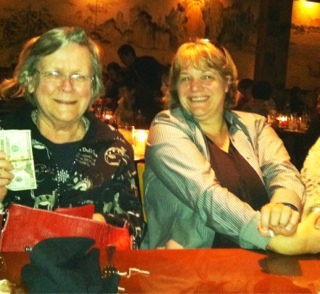 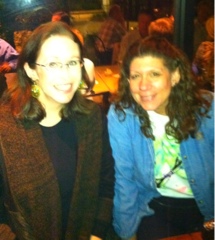 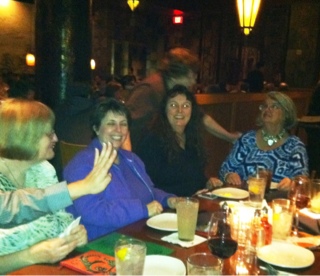 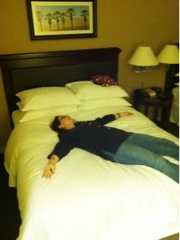 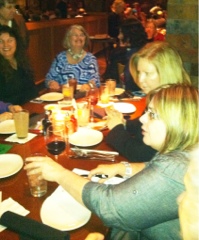 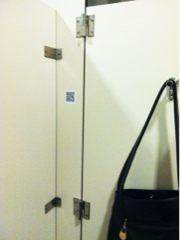 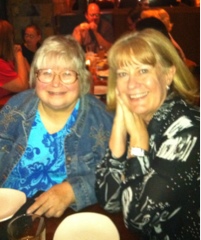 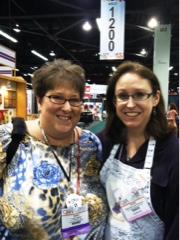 Posted by Sandy Steen Bartholomew at 1:46 AM