I have posters available on Zazzle for the UN-Tangle Retreat and the original Fashionista cover.


Zazzle has a special discount available until the 16th of April 2012. Use the code: TAXDAYSAVING for 10.40% off (enter it on the Check Out page). Also free shipping over $50.

Posted by Sandy Steen Bartholomew at 1:42 PM No comments: 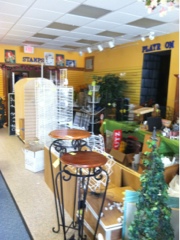 Most of you know that, in December, I closed my brick and mortar store of ten years, Wingdoodle. This weekend we are having a Yard Sale (for lack of a better description). The sale will be on April 14-16 - Saturday, Sunday and Monday from 12-3pm each day. If you are interested, but can't make it this weekend, please email kay@wingdoodle.com to schedule a time for tomorrow or Friday (or a different time this weekend).
My daughter and I started dragging things out of the attic a few weeks ago and we were amazed at all the things we found! Christmas trees, lights, twirly-slatwall fixtures, Carruth Studios sculptures, exercise/tumbling mats (Lilah is keeping those!) Actually, once we found the mats, Lilah stopped helping me and started flinging her 5 year old body all over the room - often completely missing the mats... 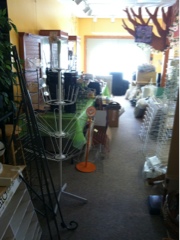 Anyway. The next week, I started on the old "stamp room" and then the storage room... and finally, I attacked the office the other night.  I dragged enough fixtures, displays and product out of hiding to open a completely new store! I have a lot of wire racks - for Mrs. Grossman stickers, Folkmanis puppets, big and little finger puppet racks, floor racks for cards, table racks for just about everything, iron display easels, a gajillion baskets, earring display stands. Shopping bags, fold-up boxes, a trillion sample cards for Outlines, Hero Arts stamps, etc. Many Klutz Day craft kits (the castle ones would make awesome goody bag surprises for a kid's birthday party!), a credit card machine, receipt printer, microwave, iMac computer, fax machine, shelving, more shelving, a computer desk, a counter, stools, paper and craft stuff, a tree... oh-forgiveness-sake... just come and look. Most larger items are priced, anything not priced, please make an offer. We really need to get this stuff off to good homes and we need to raise some cash to cover the building's expenses.
My current plan (hope?) is to move my Belfry studio downstairs and take over the first floor. If we can rent the two upstairs spaces, then I think we can hold onto the building and we'll see what develops! And yes - if you have been lusting over my amazing studio space above Wingdoodle - it can be YOURS!! The other space is also very nice, but not as sunny. Both spaces each has it's own bathroom, and an extra office/room, plus storage closets. They share a "waiting room" with it's own bathroom and an entrance/stairwell covered in Zentangles! Heaven, right? :-)
Posted by Sandy Steen Bartholomew at 2:27 PM No comments:

Create Your Own Retreat!

This is a fantastic idea! The Midwest Art and Lettering Retreat (where I am teaching in August) just decided to open to those who would like some time and space to work on their own projects. One of those "Duh - genius!" kind of ideas. So you get to do what you want all day, use the college, and then have meals with the rest of us and share ideas! Yes!

Posted by Sandy Steen Bartholomew at 1:00 PM No comments:

I finally had time to take a really good look at Joanne Fink's book, Zenspirations

- Letters & Patterning. This is a nice diversion from all the traditional Zentangle® books out there. Actually, it is NOT a Zentangle book, but rather a guide to drawing... "Frames, shapes, monograms, patterns & borders"... in Joanne's distinctive style. There are a lot of beautiful examples of her work, and a little bit of instruction. It doesn't really teach HOW to draw patterns, but gives lots of ideas on how to use such patterns.

I also watched a great video on YouTube of Joanne demonstrating how to draw her intriguing dangles and vertical patterning. This is the part of the book I was most interested in, and I admit, most disappointed with, when I discovered that there is only one page about it in the book. But watching her draw on the video made me want to grab my own pen and start "dangling"!

I love the way she found inspiration from Zentangle and incorporated it back into her own work, and style. I also love the idea of drawing down, or up, with tangles. I will admit, although it might shock some of you (!) that the hardest part of Zentangle - for me - is drawing in a non-representational manner. Horrors! I am an illustrator by nature and I crave a story. The story doesn't always come from people or creatures interacting in a scene. Sometimes, it can be letters or even a squiggly line.

Here's an example... the text from the cover of Totally Tangled: 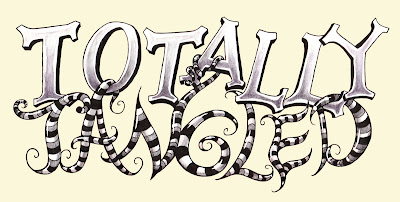 Do you see how the two types of letters have personalities? Conflict? There's a bit of a story going on for those who notice that sort of thing. And by dangling something, it automatically creates action and interest. 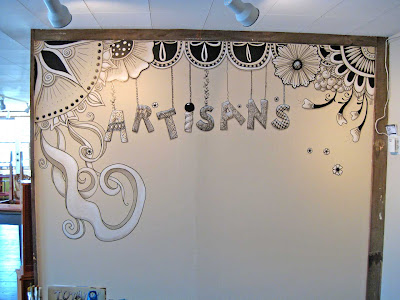 Two years ago I did this mural for a local shop. It's dangly - I found it easier to just start from the top and work down. The mural we have been working on in my studio's stairwell started from the bottom and grew upwards.

So all this has been brewing in my head - growing and dangling tangles, stories, Joanne's dangle-style... AND the current preference for Zendalas... I found myself trying out the new Zentangle® Zendalas. Yes, tangling just for fun. What a concept. So I mixed it all together and got this (chaos?): 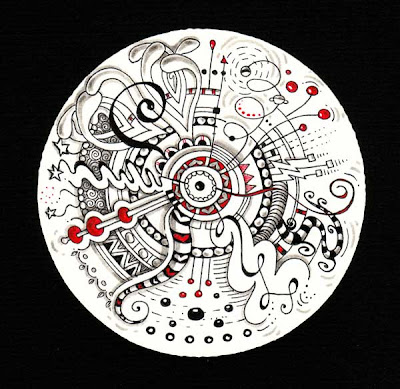 I used one of the blank tiles (most in the pack are pre-strung), started from the center-ish, added some lines and danglies - working around in a circle. Then, I added some Btl Joos and Mooka tangles. I added more straight lines behind the tangles and dangles and filled some of them with other tangles. I started shading with a pencil, but didn't like the way the paper was responding. I tried a gray Pitt marker, looked a little better... the paper is soft and very absorbative. I thought it still seemed a little flat, so I added some punches of red.

I like it. Although it is more an illustrated "Big Bang!" than a serene, contemplative, balanced Zendala. But I am more of the former than the latter anyway. In the CZT group on Facebook, there are so many seriously beautiful Zendalas appearing all of a sudden. Since I am feeling a little (w)itchy this week, I will go and post this one and see what people say. Hee hee. :-)
Posted by Sandy Steen Bartholomew at 5:08 PM 12 comments:

Run. Don't walk (actually just click this link...) over to Sandra Strait's blog Life Imitates Doodles!! She just posted a review of my new book, Tangled Fashionista. Yes, yes, that is exciting, and it is a very nice review, BUT her artwork...OH! Under the guise of "testing" the book's paper, she did pages with Copic markers, some with watercolor pencils, even a ballpoint pen... and every single "sample" is a masterpiece. Don't believe me? Go look RIGHT NOW, then come back and leave a comment here and tell me if I am wrong!

And here's her shortened link: http://bit.ly/I2AOyh  put it in your Twitter and Facebook messages, OK?
Posted by Sandy Steen Bartholomew at 7:54 PM 7 comments: 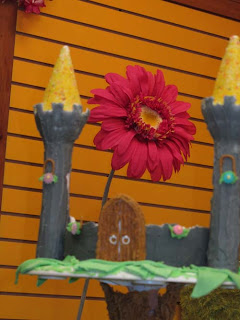 My photographer friend, Laurie Strysko, gave me a disk of great photos from the Fairies and Fashion Book Party. If you are tired of looking at pictures, or just jealous because you didn't get to attend, skip this email!!

), my Etsy store, and other booksellers. Also, I have a T-shirt on Zazzle with the Cover Girl. All shirts are 40% off at Zazzle through this Sunday (April 8) - be sure to enter the code: FINDSHIRT4ME when you checkout. And I would like to remind people... Tangled Fashionista IS a coloring book! It IS a coloring book. I have already written "How to Zentangle" books - this one is for fun. 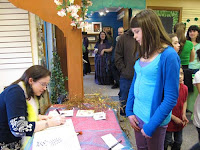 And now back to our regularly scheduled program...
I picked my favorites - these are so much better than my own photos - but there are quite a few... Enjoy! 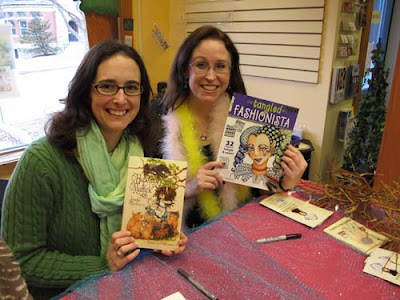 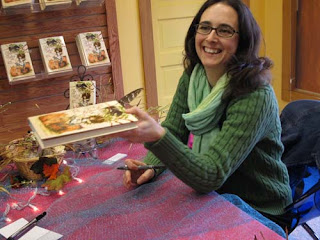 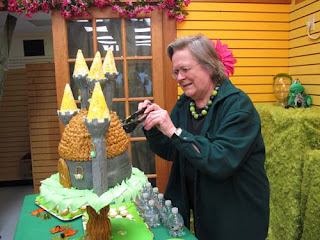 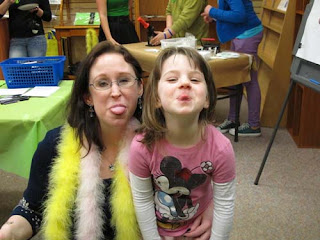 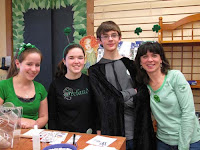 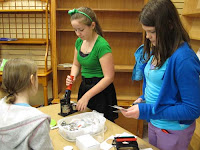 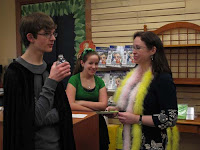 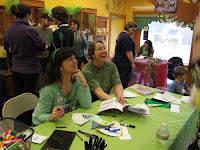 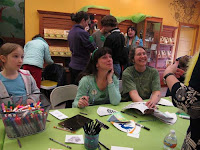 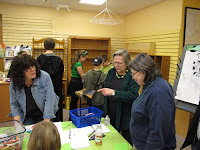 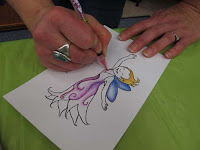 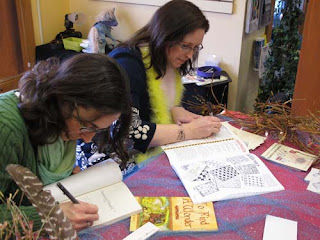 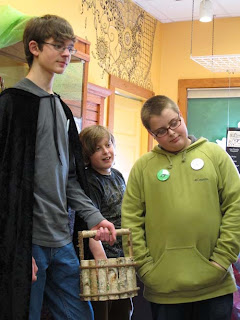 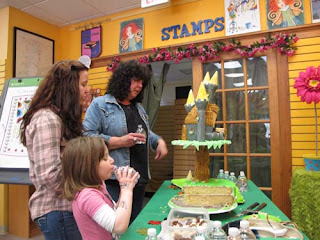 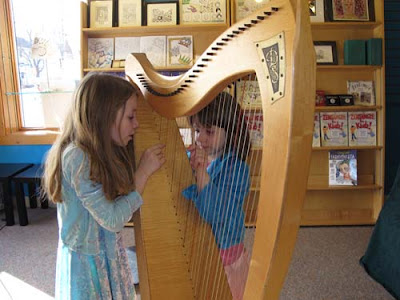 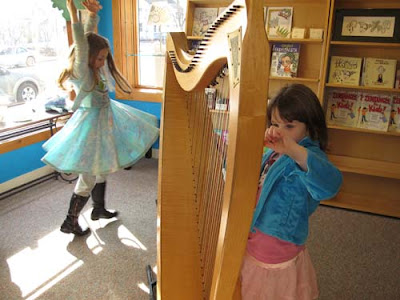 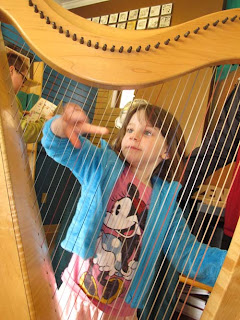 Posted by Sandy Steen Bartholomew at 1:31 PM No comments: