Tangled up and Creepy!

I was asked to teach up in New London (NH) today at the Tracy Memorial Library. Their book program has the theme "Edgar Allen Poe" and with Halloween coming up fast, the question, "can you do an intro to Zentangle with a creepy theme?" Ah, let me think about that one... YES!

I actually spend a lot more time preparing for these workshops than you might think. Not fond of repetitive tasks, I have to come up with new ideas to keep it fresh. And, in this case, I was told I had kids ranging from 5th-12th grade. Whoa.

The first hour was classic Zentangle, except that I prefer using Sharpie Pens with younger people - for many, many reasons. The second half we did white on black. I tried to pick as many of the creepier tangles as I could squish onto two tiles. We did do shading, but I am still mastering my iPhone camera and its flash blew away the shadows! 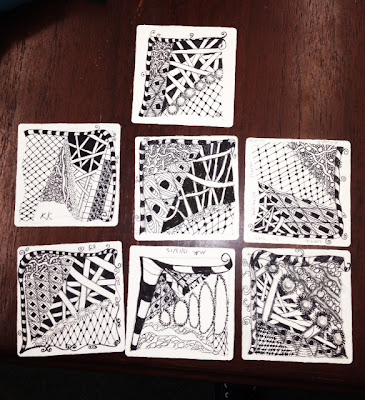 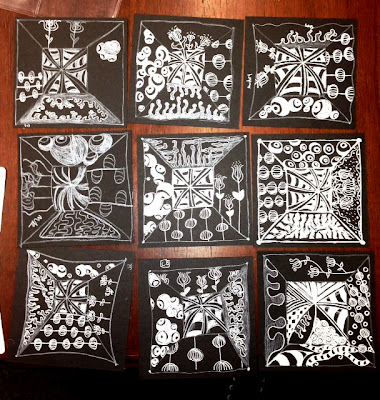 For the last half hour or so, I gave each  student a piece of black 12x12 cardstock on which I had traced a cobweb as the "string" - and told them to go at it! This is the part I love - when they start creating their own patterns and improving on my ideas! 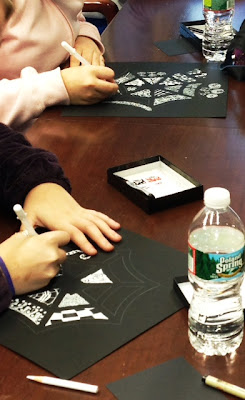 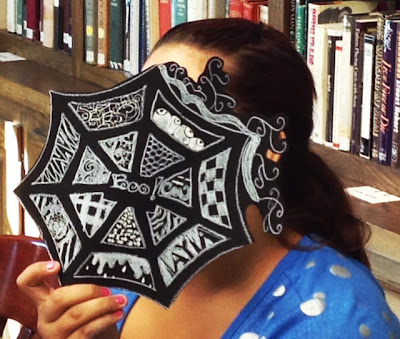 I was slightly impressed with myself - we fit all this into 2.5 hours! I have definitely gotten better at estimating what can be accomplished. Although, when I tested it out ahead of time, my spiderweb actually took... well, let's just say it was more than a half hour! I did have a great time making the sample, but after watching what the kids did with their spiderwebs, I may need to make another. That's what is so wonderful about teaching classes - so many cool idea to stea...AHEM.... inspire. ;-D

A couple of things I want to point out in my piece: Btl Joos transforms easily from its plant-based origins to a more tentacle-y tangle by adding little dots for suckers. And do you see how different Hollibaugh looks just by changing the drawing tool!? For the ribbon-y one at the top, I drew with a white gel pen and colored in, lightly, with a white Prismacolor pencil. For the more traditional one near "Boo" I drew and filled in with the gel pen. Then I added shading with a regular pencil. That one looks more mummy like. The puffballs? Those are vintage Sandra Strait... dismembered "Caterpillar". Ah, creepy. [contented sigh]

As usual, I crash after social interactions. To be followed by a social hangover the next day. It's a tradition. So upon arriving home, I sprawled on the couch and rented  "The Best Exotic Marigold Hotel" on Amazon. Good choice. I think this is now one of my most favorite movies.

I could relate to so many of the characters in the movie. Especially that of Judi Dench. I know that feeling of trusting one person, blindly, for a long time. The excitement, adventure and terror of suddenly being... just you. And having no idea what you are doing. I laughed and cried at the same time when she tried to change her internet plan, but they "can't" help her because it's in her husband's name. And he's dead.

I am so fascinated, and rather terrified too, of everything that is India. I love Bollywood movies, the dancing, henna tattoos, the carved wood fabric stamps, the sari fabrics, the people, the milder ("child mild") foods, the architecture and mystery. And I am completely fascinated by the junk statues of Nek Chand. I am  equally frightened of the chaos. (Well, I get disoriented just entering a Home Depot or Walmart! Imagine me on the streets of India...)  Some day, when I grow up, I'll make it out to India. I almost went two years ago with my sister and some friends, but I got divorced instead. Hmmm... I'm not sure I avoided the "chaos" part.

I love the boy who is trying to run the hotel, win his mom's approval, and marry the girl of his dreams. His great line, which made me chuckle, but also, consider:

"Everything will be alright in the end.
If it's not alright, then it's not the end."
Posted by Sandy Steen Bartholomew at 10:02 PM