It's been a bit of a whirlwind getting to this point! Trying to get my homework for the Lilla Rogers class done, the same day that I had Open Studio at The BeeHive, my sister and her whole family arrived, somewhat unexpected, to stay at my house, and doing laundry and packing... have I ever told you that I am NOT a multi-tasker? 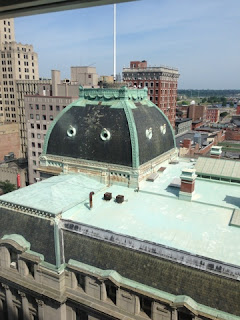 Anyway...
Alex and I somehow managed to do everything we needed to do and were only one hour late in leaving the house to head down to Providence, RI for the 11th Zentangle Teacher Certification Seminar.  I decided to get Alex certified while I still had some influence over his summer activities and I think my hunch may have been a good one. Despite having a really bad head cold, he has been tangling up a storm and I am really excited to see what he does with this. 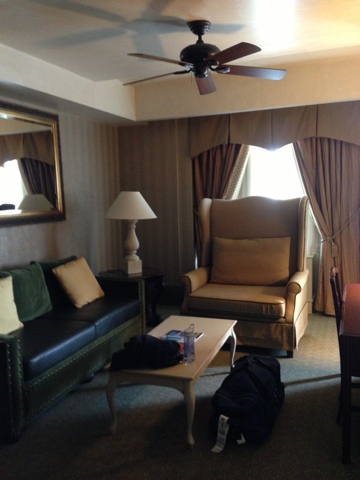 We are staying at The Biltmore Hotel which is covered with tangles and rumored to be haunted. Cool. The room left us speechless. There was a giant chair in the living room and huge, poofy, royal looking beds. Alex had been expecting to sleep on the fold out sofa, so he was beyond thrilled to get a bed that is "as wide as I am tall". Seriously, Alex is tall! 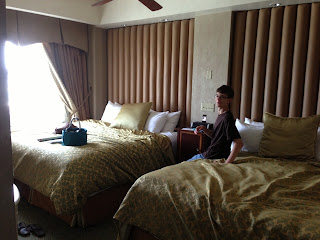 I always feel really strange when I am in Providence since it doesn't look much as it did when I went to school here. There was no river, and the downtown area was so dangerous, it was off limits. Now there are little art boutiques, restaurants, hotels, a beautiful park and skateboard park, and then there are the gondolas and river walks and a ginormous mall with an iMax theater built over the river. Oh yes, there's a river. We used to joke that Providence was the world's widest bridge. All this construction was being done while I was in school. We had a space of about three feet outside the Illustration building at RISD between us and the four lane highway. Now, there is an enormous brick... I don't even know the word?.... giant patio-thingy that goes for miles, and overlooks the canal and bridges. Jealous, me? Why would you say that? ;-)
It's really pretty. 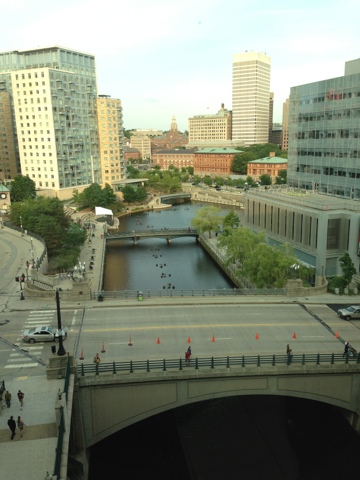 It was also 92 degrees and muggy... so Alex and I did a lot of walking the first day, then fled to the air-conditioned room.

So, here are some highlights of the seminar, so far...

Today, Tuesday, we CZTs who were not technically IN seminar, but were lurking around because we had family members in training - gathered together in the lobby to gossip and laugh and pretend to shoot a video about my new Tangle Cards. I think I have learned more out in the lobby than inside the seminar (LOL) - there are so many fascinating people here. And from all over the world!! I was so excited to meet ladies from Ecaudor, Latvia/Belgium, Sweden, South Africa and Alabama... and there are actually quite a few men here too. One is named "Dude". Yes. Dude. And my son and Caroline Broady are the youngest CZTs yet.  Alex is 15 and Caroline is 14. Woo-hoo! A record! They will both be amazing CZTs. I was so proud of Alex - despite being groggy from cold medicine - he has been doing his best to be friendly and open-minded and he's been talking with people. I knew this was all worth it when, at dinner last night, he was asked what he might do with Zentangle, and he replied - "I think I'd like to teach it to my school. The entire school." And then went on to wonder how he could get enough supplies to give to all the students. Caroline is also pondering how to create a club at her school. Very cool kids!
I hope this post doesn't sound like an ad for CZT training - it's actually quite difficult to get in (there's always a waiting list). But I think going to seminar, even if only to visit for a few hours, helps me reconnect to why I feel so passionate about what I do, and reminds me that there are an awful lot of people out there (like you all!) who are really wonderful, interesting folks. Without that reminder, I'd just crawl back into my batcave and draw on the walls. ;-D
Posted by Sandy Steen Bartholomew at 1:11 AM