In case I forget to tell you, I think you are all amazing!
Here's another really cool letter as proof:

I really enjoyed Totally Tangled and it is the one book I keep in my bag with my tangle supplies. I thought you may want to see what I was inspired to paint. I am primarily a fiber artist: spinning, weaving, dyeing (you can see what I do in my etsy store).

I admit I hate to exercise. I find nothing productive about walking for an hour in front of a TV. I love spinning yarn. Combine the two and I will exercise happily.

So I converted an exercise bike to a spinning wheel. I designed it to look like an antique sewing machine and used tangles inspired by your book to paint the frame. Here are a couple of photos.
- Joy Cain

Spinning wheel? Exercise bike?! Zentangles?!!!
You are as curious as I was, right?


It really works and she has posted the steps for creating the machine on her blog Joy Did It.
Posted by Sandy Steen Bartholomew at 1:49 PM 4 comments: 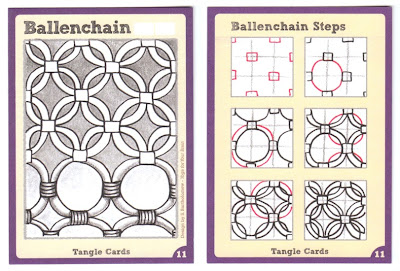 Ballenchain is based on a traditional quilting pattern usually called something like a wedding ring design. So, if you take it just a teeny bit off to the side, you can make the leap from Wedding Ring to, ahem, Ballenchain. (Just say it out loud if you don't get it).


Tips for this tangle -
There is no shame in using a pencil to draw guidelines when you are learning to draw a new tangle. Hear that? No shame! I use a pencil to draw a very light grid. If you are super clever (oooo, a dare) you can draw the grid in pen and integrate it into your tangle design. If you aren't clever - only kidding - or this tangle is too advanced or cluttery looking for your taste... then try leaving off the overlapping circles. Notice how the bottom pattern (on the front of the card) looks much simpler and cleaner?

You can create a piece that uses Ballenchain the way I have designed it, or create your own tangleation, or variation. Post your art on the Beez Ink Studio Facebook Page.

The winner will be chosen next Thursday, August 1st, sometime after lunch. ;-)

And anyone can enter - any age or skill level. And it is fine to submit more than one entry.
And please tell your friends. Unless they are wicked good tanglers and you don't want to compete with them. This is supposed to be fun after all.

Let's see what you've got!

Entries from Round 1 can be seen here and Round 2 are here.

Ballenchain is from the Yoga for Your Brain card pack. The Tangle card packs can be pre-ordered HERE.

Posted by Sandy Steen Bartholomew at 6:00 AM 2 comments:

Prepare to be amazed! This gets better and better. Here are the results of this week's challenge.
Behold... Annee...

YEAH!!
(Megan, be sure to email me where you want your super secret, highly coveted new Tangle Cards to be sent!)

Tomorrow I will post the next Tangle Card. I hope everyone will do another piece and pass the word around too. Megan (and Diane), you are welcome to enter again - you just can't win twice. ;-)
Posted by Sandy Steen Bartholomew at 7:08 PM 10 comments:

A few more from Challenge #1

There were a few late entries for last week's Challenge #1 - YAF. I thought you might like to see, so I will add them here. Keep posting this week's entries on Facebook - I am so impressed with the clever and beautiful ideas!

Posted by Sandy Steen Bartholomew at 11:57 PM No comments:

Sometimes the anger and hatred that comes up on the internet in response to Zentangle® discussions just takes my breath away! I have to mentally back away and try to find some distance. It can feel very personal to those of us who are passionate about Zentangle and even more so to those of us who are connected by name. I think what makes me feel most... resentful... is that I have to feel like I must defend it at all. Seems like people could just make a choice - do they care or not. Not? Fine, move on.

A few days ago I saw a great article on Michael Hyatt's blog written by Jon Acuff, called 3 People You Need to Ignore Online.  Jon talks about the Spectator, the Hater, and the Complainer.
I had heard the saying "Haters Gonna Hate" but I didn't really understand what that... meant. I had learned, the hard way, of course, not to respond to mean reviews on Amazon. And I am learning that there is a difference between someone asking a question because they actually want an answer, and someone asking a question because they just want to be mean! 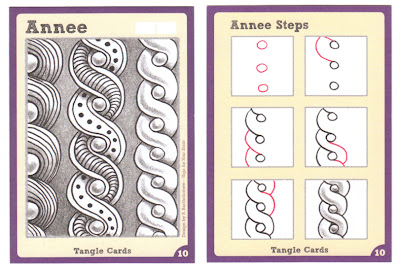 Up next is one of my most favoritest tangles - Annee.

Annee was inspired by fancy, carved wood trim in a Newport (RI) mansion. The name came from the fact that I was starving while I drew it and it reminded me of a pretzel from the famous shopping mall destination of a similar name. One trick that I have learned - after drawing a gazillion of these - (and outside on a mural too) - is to draw the first steps... the circles and the curves on the left side... then FLIP your drawing 180 degrees and just repeat the curves down the side again. It is very easy.

You can create a piece that uses Annee the way I have designed it, or create your own tangleation, or variation. Post your art on the Beez Ink Studio Facebook Page.

The winner will be chosen next Thursday, July 25th, sometime after lunch. ;-)

And anyone can enter - any age or skill level. And please tell your friends.
Let's see what you've got!

Entries from Round 1 can be seen here.

Annee is from the Yoga for Your Brain card pack. The Tangle card packs can be pre-ordered HERE.

And also be sure to take a look at the contest starting up on the Zentangle for Kidz blog too.
Posted by Sandy Steen Bartholomew at 7:00 AM 9 comments:

There were so many incredible entries! I'll post them all here so you can see what incredible work everyone did. You can see more details and some explanations of the pieces on the Beez Ink Studio Facebook page. Now before you go scrolling through to see if you won, I just have to say that this was a LOT harder than I had thought it would be. I tried making up criteria, just picking my favorite (yeh - that didn't work - I liked something about each one...), stepping back and seeing which one looked best as a thumbnail, every variation possible. In the end, I got Alex to help me (he's a CZT now - whoo-hoo!) and we narrowed it down to two criteria... which one used the most YAFs and which one had a charming reward for looking carefully. :-) Ok, now you can look.


Diane Yaciuk!!!!
YEAH!!
(Diane, be sure to email me where you want your brand-spankin' new Tangle Cards to be sent!)

Tomorrow I will post the next Tangle Card. I hope everyone will do another piece and pass the word around too. Diane, you are welcome to enter again - you just can't win twice. ;-)

Oh last note - I know this was in the entry rules, but I wanted to say again that I am hoping to use many of these entries in a book I am working on and entry in the contest means you give me permission. However, I will still need your written permission and any contact info you might want included. This means that if you DO NOT want to be included, that's fine too. I can't force fame and fortune on you. Well... fame, anyway. ;-)
Just let me know.