I hope this kind of creepy tangle - Gewgle - didn't scare anyone away! :-) I wanted to end the series of Challenges with something fun and unusual. As usual, I was really impressed with the incredible entries - and the sense of humor is wonderful too. As you can imagine, choosing one winner, or even two, is really stressful! So - I decided to completely change the way I picked the winner for this huge, final decision! (See below...)

And the winner is....
EVERYONE!

Yes, that's right. I wanted to reward all of you who kept entering and submitting beautiful work every week. And those who were brave enough to try this weird tangle... And, maybe it was a coincidence, but my publisher just sent me a box of my personal copies of the tangle cards... so I am feeling very generous. Each of you posted above should send me an email with the address where you would like your pack of cards sent. (Even if you think I already have your address, please send an email, so I can keep track).

My Head Studio Minion, Bonnie, is going to scream when she reads this! (Sorry Bonnie!?) because she has been doing all the packing and shipping lately. But I will find a way to make it up to her. Bribery seems to work well with her too. [Speaking of Bonnie - she was accepted into the Certified Zentangle Training for this October in Providence! I promised her I would drive her down and back, so I will be around to say "hi" too. Anyone else going?]

Gewgle is from the Kidz Edition card pack. As I mentioned before, don't let the "Kidz" in the name fool you. This pack of cards has tons of great, non-juvenile, patterns in it. The "Kidz" just means that there are some Lilah Beans integrated into the pack. The Tangle card packs can be ordered HERE.

I created an eBook - The Tangles of Santa Fe - for the Art Journal Retreat that I am doing with Jessica Wesolek in Santa Fe (in two weeks!!) 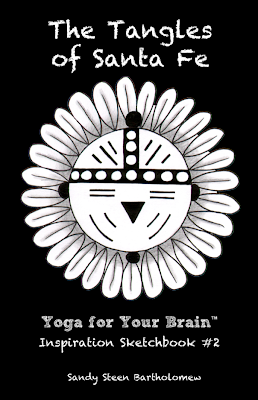 I picked a bunch of designs from pottery, rugs, art, and rock paintings and then broke them down into simple steps - a la Zentangle®. 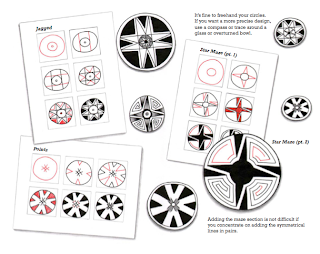 Some of the patterns could qualify as actual tangles, some are just really cool designs that I show you how to draw. They are all great for use in your own art pieces. 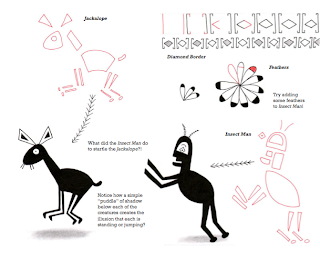 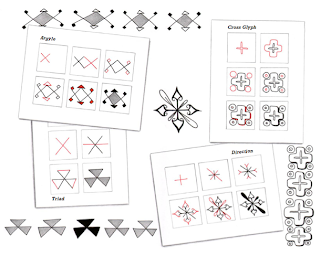 I design these ebooks so that the two page spread views as one page on an iPad or computer and can be printed out on a sheet of 8.5x11 paper and then folded in half. I glue the front edges of the pages together, back to back, so that it can open, all at once, like an accordian. The cover wraps around.

This ebook has quite a few more pages than the Tangles of Kells (~ 48 pages or 24 two-page spreads) and includes a beautiful piece by Suzanne McNeill.

I've listed it for instant download on both the Etsy shop (Bumblebat.com) and my Wazala shop on my website (SandySteenBartholomew.com) Please let me know what you think of it! (And if you have any trouble with downloading).

My favorite page is the Kokopellis. :-)
Posted by Sandy Steen Bartholomew at 2:32 PM 8 comments:

Every year, on this day, we celebrate my grandmother's birthday in the graveyard where she is buried. This year, we added in some games and party favors!

In an effort to be efficient, we loaded up all the trash and recycling into the car before we went for brunch at the Foothills. The car was packed. It had been... a while... since we'd last been to the dump!

Brunch was delicious as usual, except for some serious grumpiness from Lilah. But that is to be expected... Not only is tomorrow the first day of school (First Grade!), but her dad moved to a new house this weekend and it will be her first night there. And she has a loose tooth.

We loaded ourselves back into the car and the kids started screaming about... maggots. Yes, the squirmy white things... ew!! I guess they had gotten tired of waiting inside the trash bags and had set out to explore the minivan! Those critters move FAST! Forget racing snails, maggots would be the better entertainment at the local bar. The drive to the dump seemed longer than usual with the accompanying "There's one on your seat!" and "It's gonna get Gramma Kay!"

We unloaded all the recyclables and trash and then the fun REALLY started! It was like Whack-a-mole but on a miniature scale. My mom thought it would be a good idea to just shake the bed liner onto the pavement... but the maggots started crawling back! So Lilah started tap dancing on them... I climbed into the back of the minivan and started scooping the rest of them into a shoebox. Did you know - when you poke 'em, they curl into a ball? Yeah, they are so sweet. Lilah took the shoebox from me and declared she wanted to keep them as pets... uh... no?

Sorry - I didn't think to take a picture, although, now I wish I had.

Onward to the grave yard! 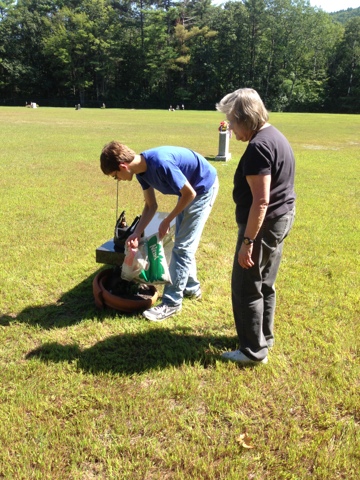 Alex dug a hole to plant the phlox I had brought (Candy Stripe). And, of course, the hole was swarming with all kinds of large and small bugs. Even a cricket and a nasty beetle-thingy. He dug another hole. We planted and watered and Lilah played some music. 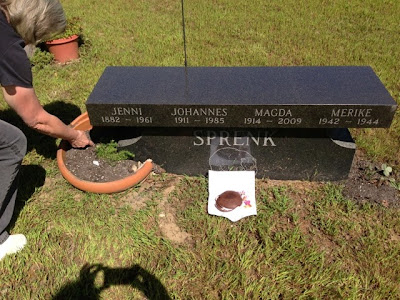 We planted the Whoopie Pie we had brought for Gramma Magda too. After sampling a little bit, of course. 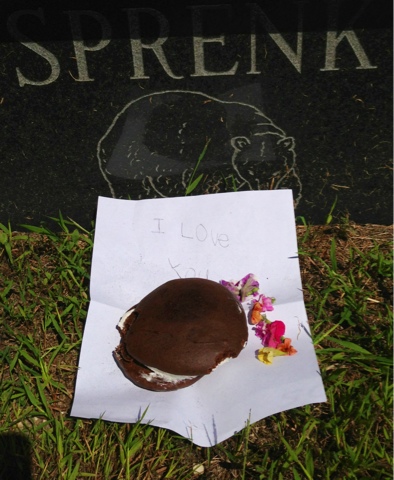 Lilah had written her a note and brought some flowers.
The bear on the stone, in case you don't know, is my grandmother. She always said she'd come back as a bear - and that's one reason we always leave her something chocolatey on her birthday. I imagine her watching from the woods... waiting for us to leave so she can have her snack. :-) 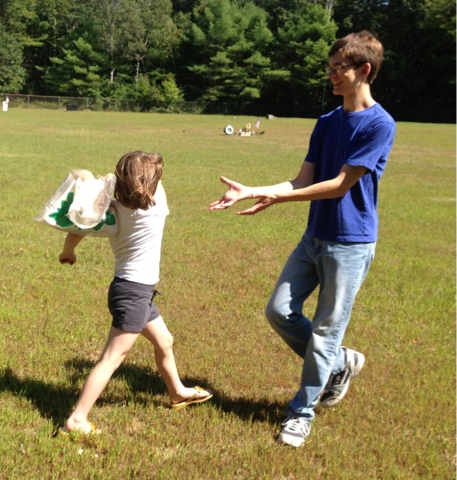 And just to prove that I have perfectly normal kids... Alex teased Lilah about who-knows-what and she proceeded to pelt him with the bag of dirt. Alex enjoyed it immensely. Ok, maybe they aren't normal.

And one more bug - I hope it's the last one... well, there was that really large spider in the garage too, but I think it was dead. So the last one was also dead, but it was a huge dragonfly that had gotten caught in the grill of my car. Lilah and I washed the minivan (remember the maggots?) and found the dragonfly. It was crispy and it's wings were huge and rainbow sparkley. Lilah put it somewhere in Stonehenge (our front garden looks like a mini Stonehenge) for the fairies.

Another lovely, ordinary, summer day.
Tomorrow, it's back to school.
Posted by Sandy Steen Bartholomew at 6:02 PM 3 comments: 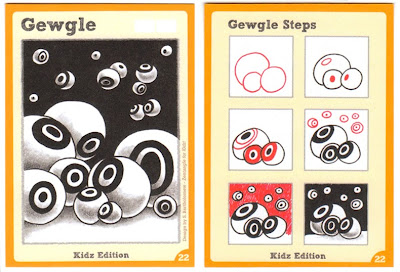 I've decided to pick two winners again since it seems much more fair. And I'm all about "fair". ;-)

This final Challenge features Gewgle, which is a play on words ("google" as in the wiggley eyes). Although these don't necessarily have to be eye-like... And don't worry about trying to get perfectly round circles. The slightly lumpy look just adds to the sense of realism! hee hee (eeew!?)

Post your art on the Beez Ink Studio Facebook Page. I'll choose one winner (well, Alex and Lilah will help) and the second winner will be by popular vote on Facebook. So be sure and "Like" your favorite!

The winners will be chosen next week on Thursday, August 29th, sometime after lunch. ;-)

Don't be afraid to post whatever you come up with - any skill level is welcome.
If you have been holding back and waiting for the perfect chance to jump in and give a Challenge a try - this will be the last one in this series, so let's see what you've got!

Gewgle is from the Kidz Edition card pack. Don't let the "Kidz" in the name fool you. This pack of cards has tons of great, non-juvenile, patterns in it. The "Kidz" just means that there are some Lilah Beans integrated into the pack. The Tangle card packs can be pre-ordered HERE.
Posted by Sandy Steen Bartholomew at 6:00 AM 1 comment:

This was a fairly complex tangle, but with two weeks to attack the challenge - you all rose to the occasion! And we get TWO winners this week. So let's see what we have. Try not to drool, these are fabulous!

The winner is...
Pamela Wolfstone!!

Congratulations! Absolutely beautiful work - and please email me where you would like me to send your Tangle Card packs. 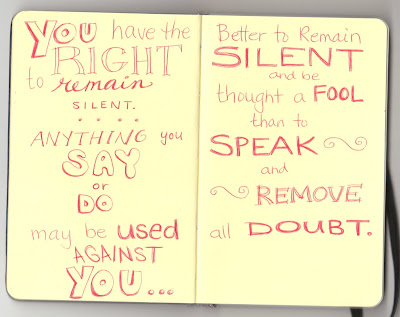 Posted by Sandy Steen Bartholomew at 3:44 PM No comments: