As I mentioned in my last post, there are so many things that I write about, but then am not sure if I should post them. Since I am feeling a teeny bit more confident today than I did yesterday, I will take a little leap and post this thought I started back in September when I was in Santa Fe and then continued in Providence... then shelved.

There are groups of men EVERYWHERE here in Santa Fe. In the restaurants, bars, super markets, in packs in the park and standing around in parking lots. It's almost creepy. In my real life, I rarely come into contact with a "man" never mind a group of them. And they are usually in suits, somewhere near an office. My world is filled with women. Which is fine. But I am remembering that... before... my real friends were always men. I like talking to women and I am finding it easier to form bonds and find common ground now. But when I checked into the hotel here, I found it so easy to strike up a conversation with Abel, the desk clerk. I know his family is in Jordan ("Oh my gosh, I was in Jordan a few years ago! How come you haven't gone home to visit? It's such an incredible place...?) He hasn't returned because his family wouldn't approve of his tattooed arms and the trip is incredibly long. Very true! It wasn't until I was dragging my bags up the stairs that I realized he had been seriously flirting with me: "I will make you dinner. I'm an excellent cook!" Mmm-hmm. That was his response when I asked where I could find something to eat at 10:00pm on a Wed. night.

It had been about 25 years since I had a proper date. I guess I wouldn't recognize flirting if it knocked me in the head... which it did. This summer. Back to that in a minute. First I want to talk about zip lines.

The only zip lines I have been on in real life are the one's in people's back yards. Those are fun, but safe. The big scary ones that start up really high in the air and end in the trees? Those are the ones I am thinking about. I realized that I approach every one of my big experiences as if it were a zip line adventure. This year alone... teaching at TangleU, Zentangle Workshops, retreats, Art Camp on Mayhew Island, and now, this Santa Fe retreat...  I work really hard preparing, climbing the mountain, with travel prep, class prep, and blogging. I get to the top, breathing hard and nervous/excited. Grab onto the handlebars and launch myself into the void. The excitement and terror are equally intoxicating. I meet amazing people, learn incredible things - I keep my eyes wide open as I scream my way down the mountain! 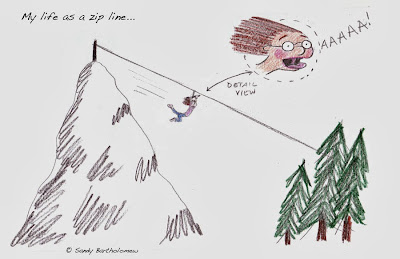 And then... smash into the trees! I barely have time to pick the pine needles out of my teeth before I am climbing up another mountain.

Despite the fact that I love meeting people and learning things... the crash ALWAYS comes at the end. When I return from camps or classes, I feel so exhausted and depleted and... lonely... that I could cry for days. It doesn't really make sense, and it never stops me from going for another ride. But I think the excitement and the camaraderie  - and the intensity in just a few days or weeks - makes the contrast at home so much more severe (thus the trees whacking me in the face). As a severe Introvert - I don't really mind being "alone" - I crave it - but I don't have a reliable way to recharge my batteries or even a helmet to wear while flying down the mountains!

If you are still reading, we can go back to the flirting part...

I just watched "Grease" on Netflix while eating take-out sushi and drawing icons for homework. This movie came out when I was in 5th grade and the boy that made my heart thump was named "Danny". We girls would sit on the playground wall outside Pine Street School and watch Danny and his friends do daring tricks on the stair railings. Ah, love. I just couldn't stand the other girls singing - at me - "look at me I'm Sandra Dee. Lowsy with virgiiiiiin-iteeeee!" Seriously? I was 10! Girls are so cruel. I loved that movie but I was always pissed at Sandy for just tossing it in and changing herself completely just so Danny would like her. He didn't deserve her. He was such a wimp! He would never stand up to his buds and defend Sandy. His image was more important than how he felt about her.

A guy walks into a studio... yes, the beginning of a classic joke? But very few guys ever walk into my studio! I had a class going on and didn't pay much attention to him until he asked us some questions and we began to tease him mercilessly. He didn't leave. He kept asking for more! He did give us some great ideas on how to attract more men to the Open Studios too - serve beer and wings and keep a broken lawn mower out front - a sure thing. We all missed him as soon as he had left. :-)

A few weeks later I received an email asking me if I'd have dinner with him. Honestly, it scared the bee-jeezus out of me. No one has asked me out in 25 years! And there was some really yicky stuff going on right then in my life (again, I can't write about it). So I finally responded to him and said "my life is a whack-a-mole game and I can't risk endangering anyone else".

That's original, right? Strangely, that didn't scare him off. He said he was ex-Navy and nothing scared him. :-) Sweet. (I think he lied, because, as it turned out, I scared him). Still, in the next few weeks, we had a TON of fun! Pig roasts, road trips, motor-boating in the dark under the stars, meteor showers, drinks in bars, pubs, and that pig roast... I drank more in those three weeks than in my entire life! It was a mini teenage rebellion (I've been putting mine off for too long!) I had climbed yet another mountain, and flung myself into the void on yet another zip-line. But this time, I had an adventure-companion. And he was sweet and funny and amazingly creative. He was a grown-up gifted-kid, just like me. And my kids liked him. And I liked his kids.

Yes, you noticed the past-tense, right? Just as I realized I was about to go crashing into the inevitable trees at the end of the zip-line, I looked over and he was just... gone.

So it's been a few months and as it is with all my exhilarating experiences, most of the ache fades and I remember the great stuff. Now I am thinking of the whole adventure as a really tough assignment for one of my classes (the relationship one). Whatever the reason for it ending - and I have plenty of choices - I learned an awful lot about myself. I may not have a clue what I want to achieve in life, but I have a really good image of what I want in a partner-soul mate: humor, imagination, creativity, respect, admiration, self-respect, loyalty, friendship, love, and most importantly - I want to be not only ON his Priority List, I want to be in the top 5.

In summary... the zip-line experience (in art and love!):
There's the anticipation, the terror the first day, falling in love with the other "characters", making new friends, learning new things about myself and other people, realizing some of my assumptions were wrong, experiencing some disappointments, discovering new strengths and talents, realizing the end is here, the wrenching pain of returning to "real" life, the terrible loneliness, the fabulous memories... then planning to do it all again!

Note: I have an update on the summer romance, but I may wait a little to say anything... ;-)
Posted by Sandy Steen Bartholomew at 4:27 PM