Wednesday, Feb. 5 was supposed to be the day the App goes to its regular price of $4.99. BUT - since it is also the day that the first in-app purchase is available... we decided to extend the special intro price by one day.

And believe me, it is really cool to keep scrolling through tangles, more tangles, MORE tangles. Breathe... And the third set will be out as soon as the Apple store approves that pack... 120 tangles OMG!

I forgot what I wanted to tell you...?

Ah - Tangle Library has been getting really nice reviews, well, except for one... and Ian and I both wish there were some way to contact people who have something to say/complain about. [If they really hate it, we'd be happy to refund their money]. If you have feedback, Tangle Library has a Facebook page, and Ian keeps an eye on that for questions, etc. I know I shouldn't read the reviews, but I honestly want to make sure we are giving people what they want.

I've been a tech-geek all my life (Timex-Sinclair anyone?), but except for some experience with Logo as a kid and programming my own Adventure games... my geek is mostly in the design area. I have learned a lot about Apps and have a huge respect for their developers now! Did you know Developers are, like, you know, real people!?

Ian has sent me links to all kinds of articles about the world of App design and marketing. It makes my head spin. (I just like to make stuff!) But he explained about iPhone versus Android apps. We have had SO many requests from people for an Android App! In order to create one - we would first need to HIRE (pay for) an Android App Developer. Android Apps do not tend to pay their developers much either. So when we look at the price of an App in the App store, we think "wow - that's expensive! Those people must be raking it in!" Not so. Don't forget "fees". I don't know exactly how it works for the Apps, but I can give you an example with the ebooks. The special deal I did at Christmas offering The Bauble Tree for just $1? PayPal took .30 from each of those. And that is just for processing. Then there are hosting fees... etc.

Also, an Android App would need to be designed from scratch and for a number of different devices with different screens. And lastly, the number of people who use, and are willing to pay for, Android Apps is very small in comparison to Apple Apps. That said... if you or someone you know, is a fabulous Android App Developer with a very high level of quality control and customer pleasing qualities... PLEASE contact Ian ASAP! ;-)

Speaking of Ian, I asked him if he had anything that I could show you to help you visualize what goes into building an App. Here is what he sent me: 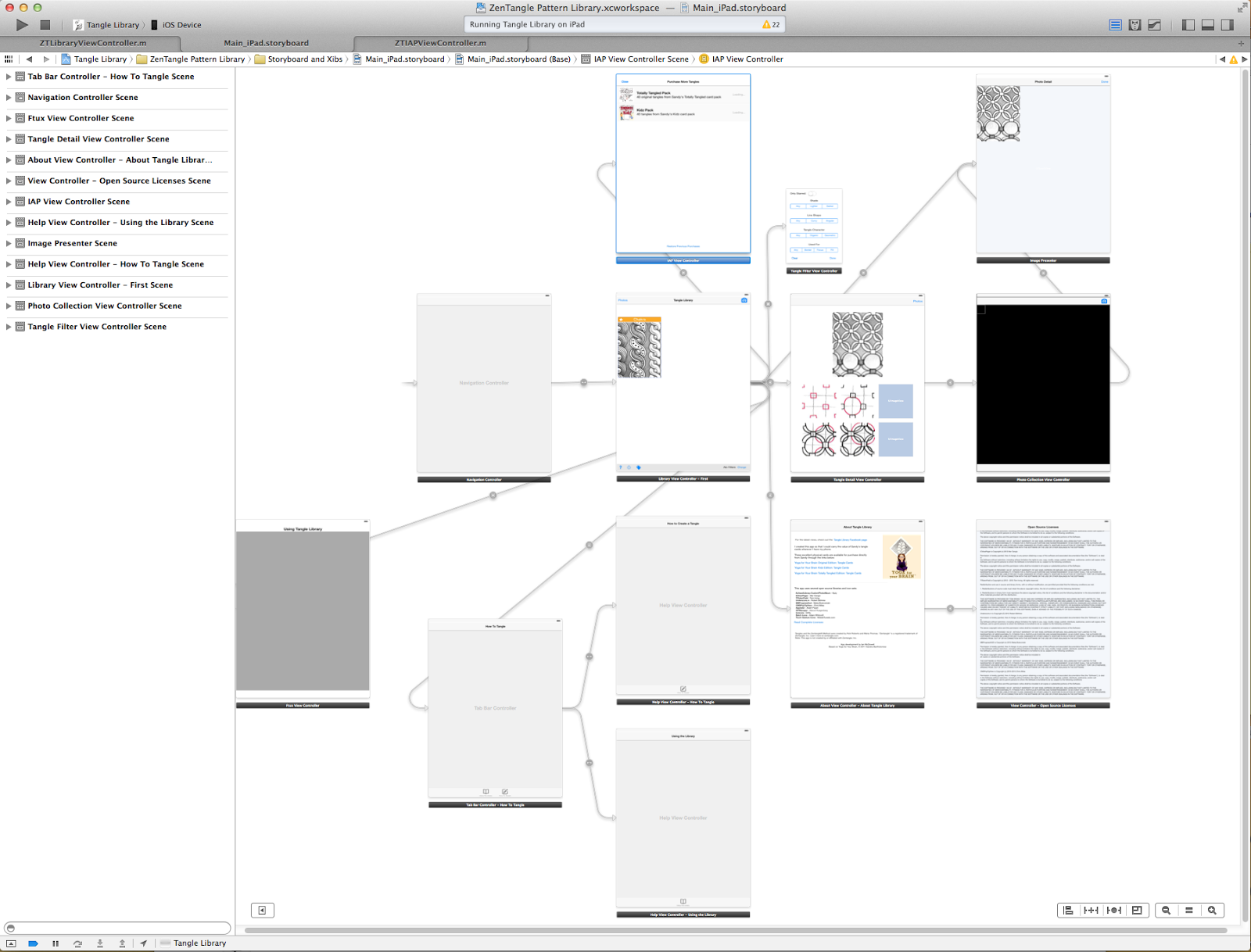 Isn't that interesting? It looks like a mind-map to me - or the way I remember building a relational database. This next one is kind of intimidating: 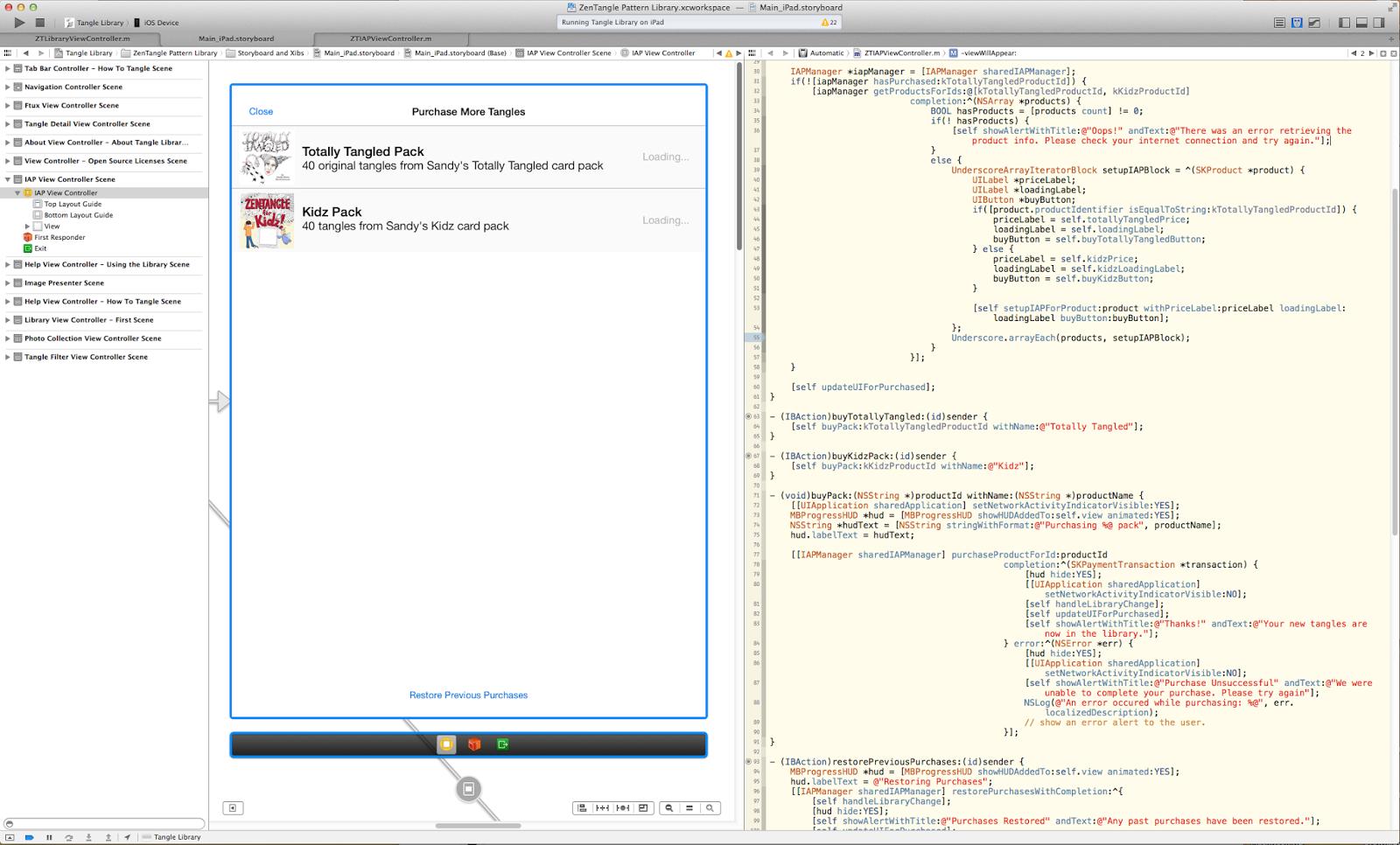 It also shows the page in the App where you can get the new tangle packs.

Speaking of which... in case you have never done this before... you need to purchase and download the Tangle Library App FIRST.

You can also find it by searching in the App store for "Tangle Library". If the App you see has a different name... it's a different App.   ;-D

THEN, you can purchase the additional packs of tangles from INSIDE the App. When you are IN the App, you will see an icon on the bottom of the screen... looks like a tag or some-such-thing. When you click on that, it will show you which packs are available for purchase. You click on the one(s) you want, enter your Apple ID, and then it will download the new tangles right into Tangle Library. It takes a few minutes to download, so don't panic.

Note: If you already OWN Tangle Library - make sure that you UPDATE the App from within the App Store on your device . THEN you will see the little tag icon at the bottom of your Tangle Library screen.

As you accumulate more tangles, make use of the "Star" function. Each tangle has a little white star on the top border. Let's say you are working on a birthday present for a friend who loves the ocean. You scroll through the tangles and click the star on every tangle you think looks ocean-y. Then you can "filter" them so only the starred tangles show. Ah, focus, lovely!