When I wrote about Death in my last post, I had no idea that I was actually being prepped for an ordeal ahead.

We'd only had the honor of Emmet LeChat's company for a little over a year, but he was very firmly ensconced in our family and our hearts. He had been deserted by his previous family - left behind when they moved - and was so skinny and malnourished, we thought he was still a very young cat.

Now after multiple vet visits, x-rays, blood tests... we learned that he had the beginnings of kidney disease, an enlarged heart and heart disease, and various other strange problems at either end of his body. We suddenly discovered that he was actually quite an old cat - overnight. Taking him to cat specialists seemed unfair, expensive and... mean.

On Friday, as I ran down the stairs to head off to a meeting, Emmett tried to follow me as he usually did. (He was like a puppy, following me around and sleeping on my feet or on the computer in my studio.) But as he reached the last few steps, his back legs failed him and he slid the rest of the way down. I noticed he wasn't able to even jump off a chair, never mind the counter - and that his fur looked different and his usually smiling face looked so sad... 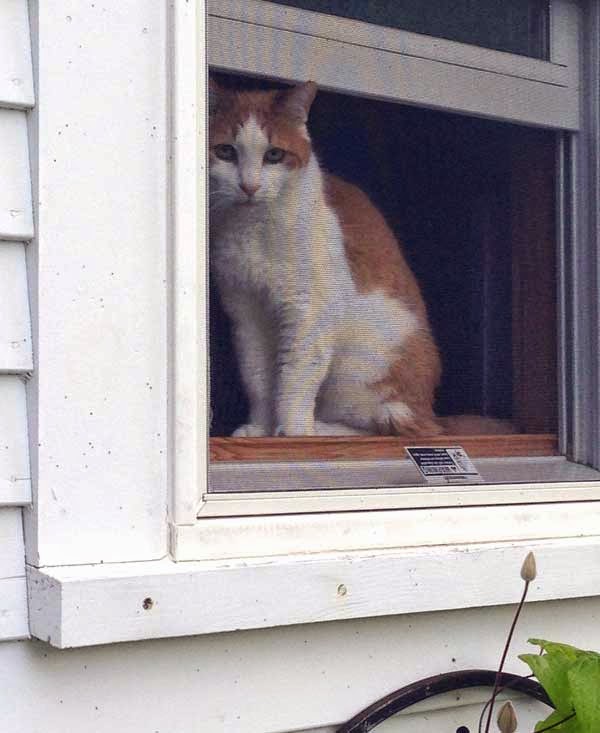 That night, I tried to take the advice I had been given the previous Sunday, and I talked to my daughter about death and what would happen to Emmett. I told her we needed to remember that he was still with us for the weekend and we would love him and hug him and make sure he had lots and lots of love to take with him to heaven. That it was OK for him to go and we would miss him, but he didn't have to worry about us.

Lilah was very sad, but she thought about what I had said and how Emmett had had the most wonderful life with us and we were lucky to have loved him. He was the most friendly, snuffy cat we had every known (and we have had many cats!) He loved everyone who entered the house. He put up with Lilah's cat-maintenance learning curve.

And then Lilah smiled and said, "so now we can rescue the Munchkin cat, Chessie who nobody else wanted!!" Oh, her empathy just warms my heart! :-)

Unfortunately, the more normal, terror had set in by Sunday morning. Sundays are always difficult because they are transition days between my house and her dad's. But this one was awful. She was super clingy and kept crying over anything. She left the note on the napkin (below right) next to Emmett's food dish, and drew the picture on the left (that's a needle in his ear) during Sunday School... and then just stood outside the church crying and crying and crying. :-( 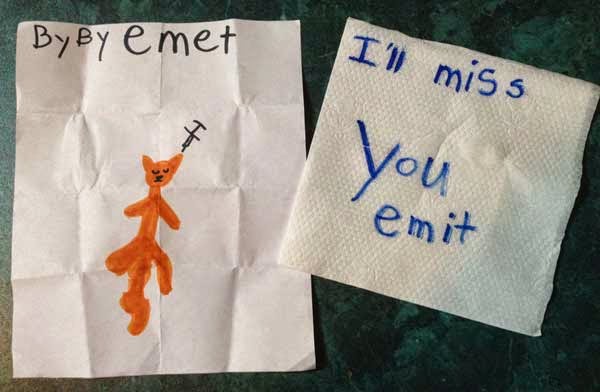 Ah - mommy-panic!? Think, think... what does Emmett need? Attention. What does Lilah need? Attention. And an outlet for sadness... We sat on the deck outside my studio - in the beautiful sunshine, and drew designs for a new cat garden we are going to make. From our position, we could see most of the backyard and the current burial site (14 cats!?) was really pitiful. We both agreed that Emmett and his friends deserved a much better, happier memorial.

I like the idea of creating a mound for my Bastet statue to sit on with cement stepping stones for each cat surrounding her. There's a huge forsythia bush already there that would be really cool to crawl underneath... and of course we need lots of stones around it all. 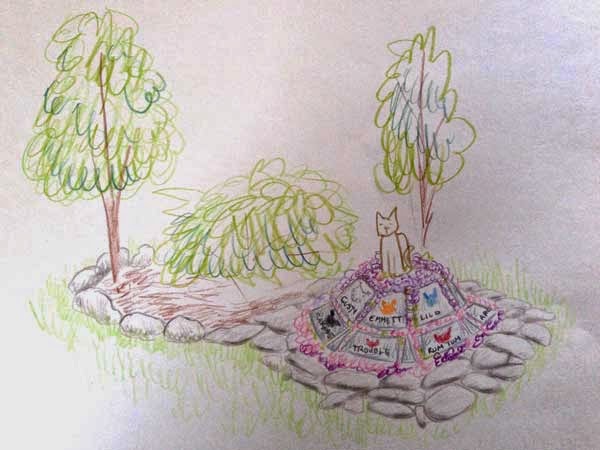 Lilah agreed on the stones. She drew her plan of the whole backyard, from an aerial view. I can see that she is still thinking about the amazing garden I had outside my apartment in Maine - she has dirt paths and stone paths and very nice flower choices. Where I just put lots of phlox, she added pink and purple peonies and blue roses. The "Don't Draw" part is supposed to represent our house. I see that she put a cat statue too, with green tombstones next to it. She said that her cat statue is MUCH bigger than my Bastet statue. Hmmm... I need to learn to sculpt in concrete! 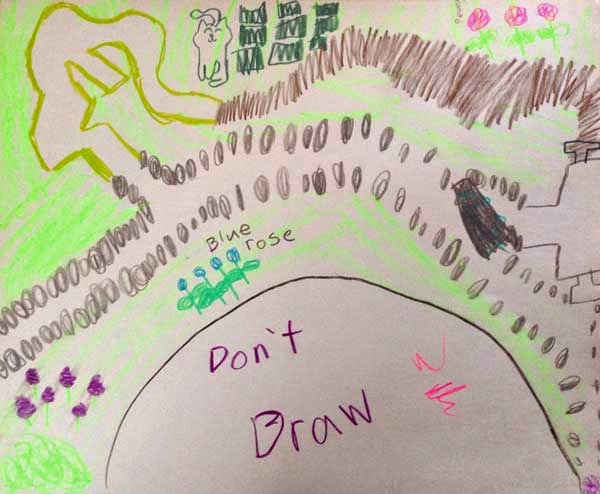 To help distract Emmett from his worries, Lilah wrote a story for him about Emmett following her brother (she wrote "bother" - which I thought hysterical!) out into the garage. But the garage door is like the wardrobe into Narnia. And the Garage-Narnia is a garden with plants and animals made from tires and metal and hardware. I love the drawings... the little dog on the lower right is made from "screws" that's why he is stripey and swirly. Emmett read the whole story through a few times... And then he sat on the landscape sketches - an interesting form of "stamp of approval"? 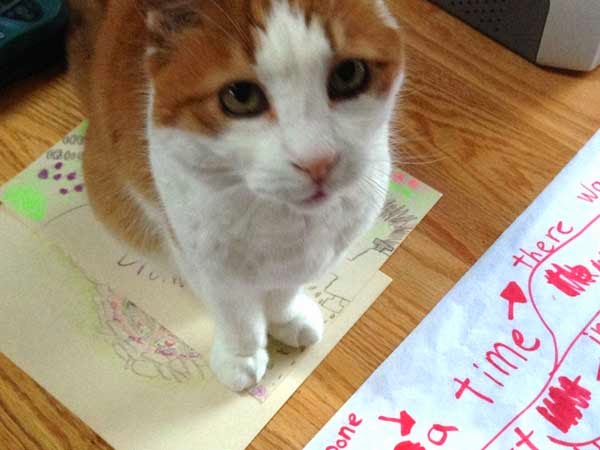 I was actually glad my kids weren't here today. Taking Emmett to the vet and trying to keep my own brave face was too much for me. Even after making the "decision" I kept agonizing over it. And when they gave him the first shot, to make him sleep, he curled up on my lap and nuzzled his nose under my arm in total trust. I'll spare you the thought process and the logical arguments, but saying goodbye to a fur-child is hell no matter how you reason it out. And I didn't realize what an awful impact it was having on me until this afternoon. I was hit with a wave of nausea (etc) and a real fever. I've had bad autonomic reactions before, but they are usually brought on by physical pain - like surgery. I hadn't realized that severe stress could do it too. I felt like I had been given that sleepy shot as well. My limbs felt like they weighed too much to lift. I lay down and couldn't wake from sleep for more than a few minutes. Chills. Sweats.

I finally crawled into bed, but desperately wanted some kind of distraction. I thought that maybe if I blogged about the experience that might be cathartic too. In the middle of writing this, I got a Facetime call from Lisa Heron in Saskatchewan. She told me all about an exciting event she is planning and we talked until our batteries died. ;-) It did the trick though and pulled me out of this scary funk. Now I feel kind of hyper and full of positive energy and ideas. I'm hoping tomorrow I will feel well again so I can start on all these cool ideas and on Emmett's garden.
Posted by Sandy Steen Bartholomew at 10:40 PM