The >Sigh< is because today was the last day of my comic adventure. But it was a great way to end it. Marek Bennett spoke for most of the day with a presentation after lunch by Cara Bean. Marek had been tutoring my son in Spanish for years so I know how multi-talented he is... languages, musician, world-traveler... cartoonist. He also travels to Nicaragua and draws with the younger kids who aren't out working on the coffee production.

He led us in some exercises that would work great in a classroom. But they would also work well with reluctant adults!

One of my favorites was to start by folding a paper into 8 sections. Each person makes a random doodle shape in one box, then passes the paper to the person on their left. Everyone makes another shape in a box and passes it to their left. This continues until all boxes have some kind of mark/shape in them. The papers are passed one more time. Then each person looks at the shapes on their page until they start to see some kind of image emerging. We added Faces, Action, Text, and Settings (F.A.T.S.) to change the doodle shapes into tiny comics or characters. 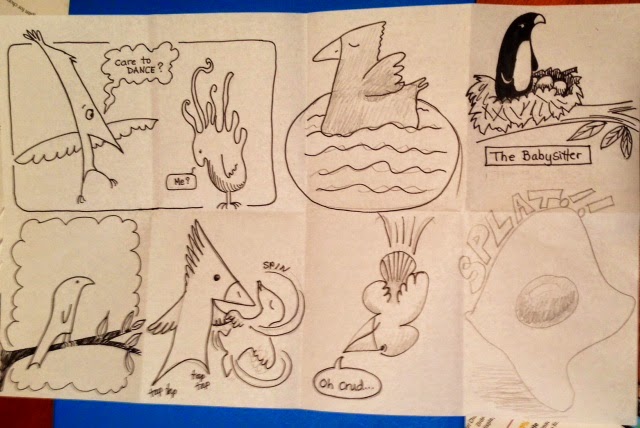 Then we created a three panel page. We could choose to do it with the big box on the top... with a large Setting to begin, then an Action, then a Result in the last box. Or flipped over, these with two Detail shots and then a Result shot in the big box. I chose the second one. 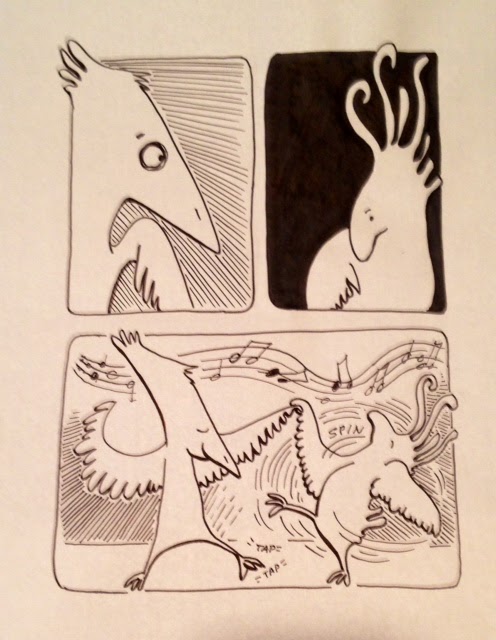 I took the birds from the first two boxes of the first exercise (did you notice that all my doodles turned into birds of some kind?) and the action from the 6th box. In this new page, the birds are attracted to each other - one is stunned, the other, a bit shy. But, together, they are unstoppable on the dance floor! 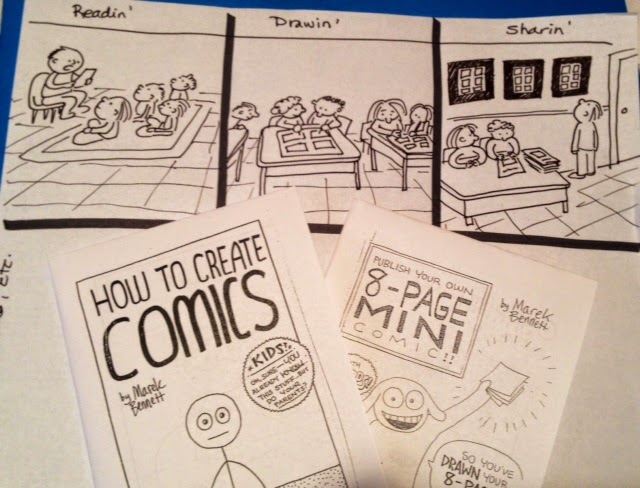 We also created a little strip to show what we would like to do with comics. In my case, I'd like to work with younger kids to write and illustrate their stories and turn them into little comics. Marek showed us how to make very cute, very simple, teeny comic books out of one sheet of paper. Here's a link to a site that is a great resource if you are interested in one sheet comic books.

My favorite take-away from Cara Bean's presentation was that it is very important for the teachers to practice cartooning - not just the students. It changes your outlook on life... not only can you communicate information with your students, but really crazy days and incidents become fodder for your own comics! Her blog is Bad Gigi and she started an illustration class and comic book art club at her school in Lexington, MA. The students became so passionate about comics, they started their own convention, called "Lexicon" (held in May each year) and they have some big names in the industry join them for the two days.

And speaking of kids... here's a picture of my Lilah showing her own comics to Marek. He's seen her work before (when he was tutoring my son), but Lilah has learned a lot this week about comics. Although she wasn't officially IN the camp, she spent a lot of time hearing about projects and exercises (and trying them out), using a dip pen to ink her comics, and lots of time in the comic library. She is working on a comic about a girl from India, who goes to Germany and then takes a boat to the US. Her drawings of the Statue of Liberty are adorable. Her character has very sweet braids and the details in her scenes are mind-blowing. She has a scene of a decrepit playground and all the rungs on the ladders (monkey bars and slides) are split in two and pointing every which way.

She wants to do some more work on it, but when it is finished we'll scan it and put it on her blog. She wants to make some mini-comics of it too. 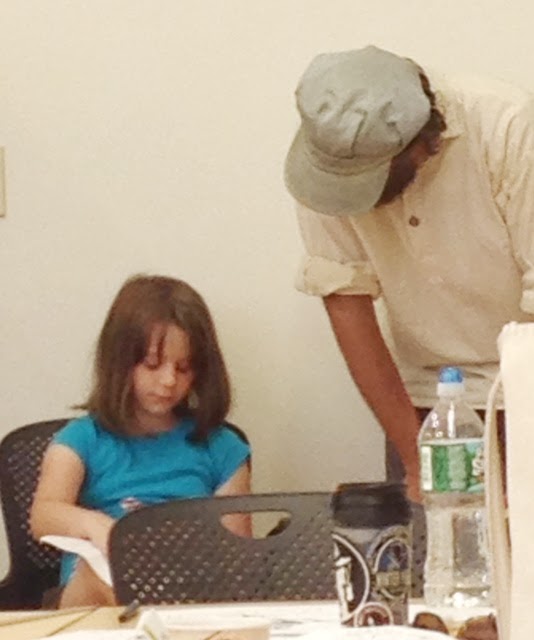 Looks like I achieved more than my own goals this week! I wanted to get inspired, get back to pursuing my love of comics and sequential art, get a taste of what going to this school would be like, and learn how to get kids motivated to write and draw using comics. I'd say I could definitely check off the entire list!

If you get the chance to attend a program or workshop at the Center for Cartoon Studies, go for it. You won't regret it!
Posted by Sandy Steen Bartholomew at 12:39 AM