The teachers here are either wind-up toys or highly caffeinated! They have so much energy and enthusiasm, even at 9:30 in the morning! Me, I'm exhausted just typing the exclamation marks! ;-)

Seriously, they are great. Very dramatic and funny... hmmmm... just like cartoon characters?

Today we started off with a very hyper, nerve-wracking, exercise. Kind of like a cartoon version of a cross between the game "Telephone" and "Exquisite Corpse". If you aren't familiar with them, you will have to look them up. It's almost midnight and I'm anxious to get some sleep so I can go back to class tomorrow morning. (My mom is probably reading this thinking "Wait! Excited for school?! Who are you and what have you done with my daughter?!") Tomorrow we are learning INKING! And that's, like, you know, with a brush and pen nibs, and... INK! Terrifying for sure. But we have been doing so much "penciling" the sides of our hands are all smudgey and gray and there are streaks across our faces. We are ready for some new marks on our bodies. And I'm hoping the photos will look more exciting - or at least show up better than the pencil.

Ah, back to the Exercise.... The first person was given a phrase and they drew a picture of it in the first box, folded over the phrase, so it couldn't be seen, and passed it on. The second person looked at the picture and had to write a phrase describing it. Then they folded over the picture so the third person only saw the new phrase - and they had to draw a picture of it. Repeat.

It's a lot harder than it sounds. But, in case it doesn't sound hard, each person only had a minute. The second time we played, we had 45 seconds, then 20... by the time we ended, there was barely enough time to pass the paper! Eeeek! Nevertheless, we were WIDE awake by 10am!!

Here are a few examples. Some were hysterically funny. 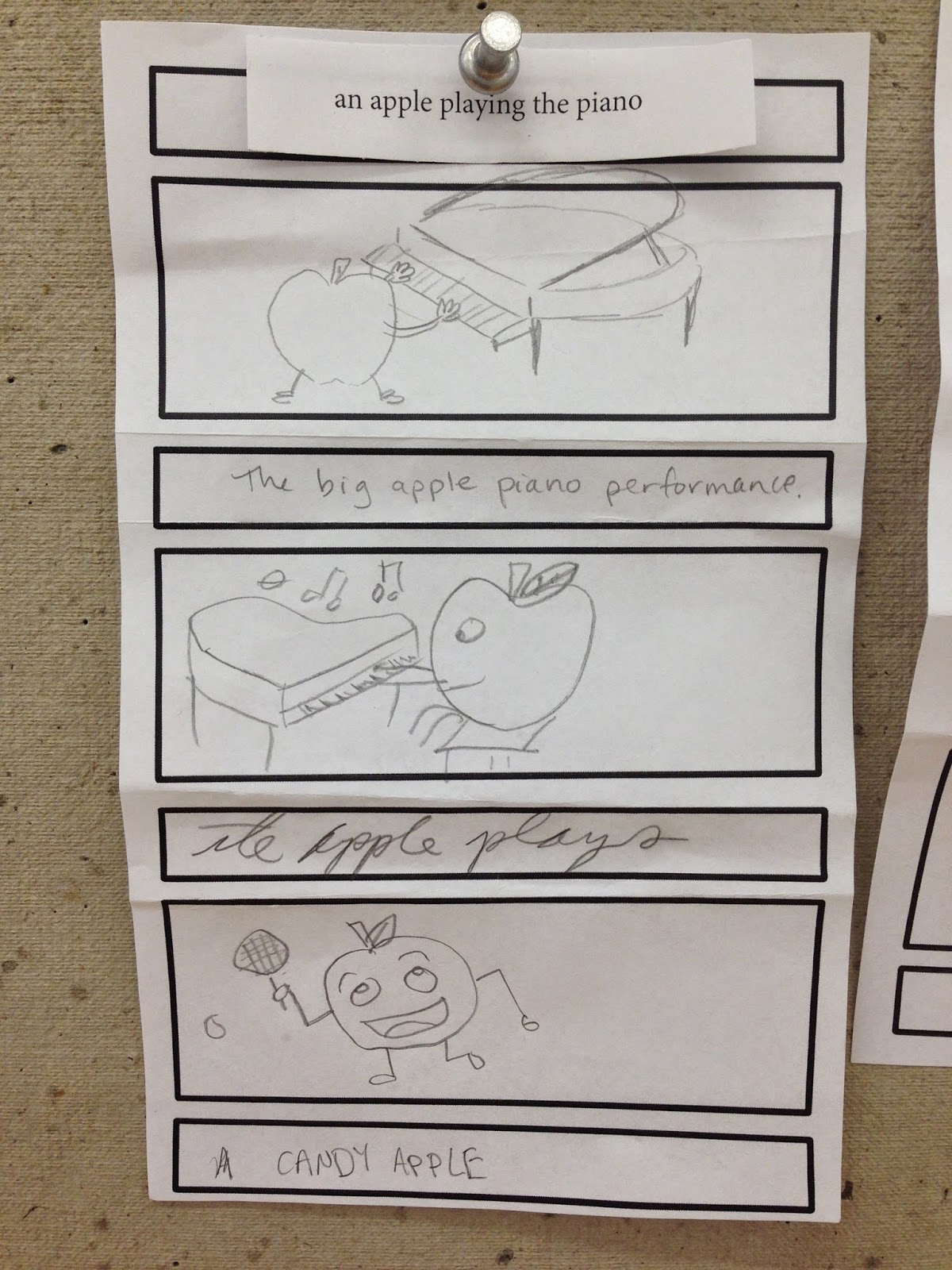 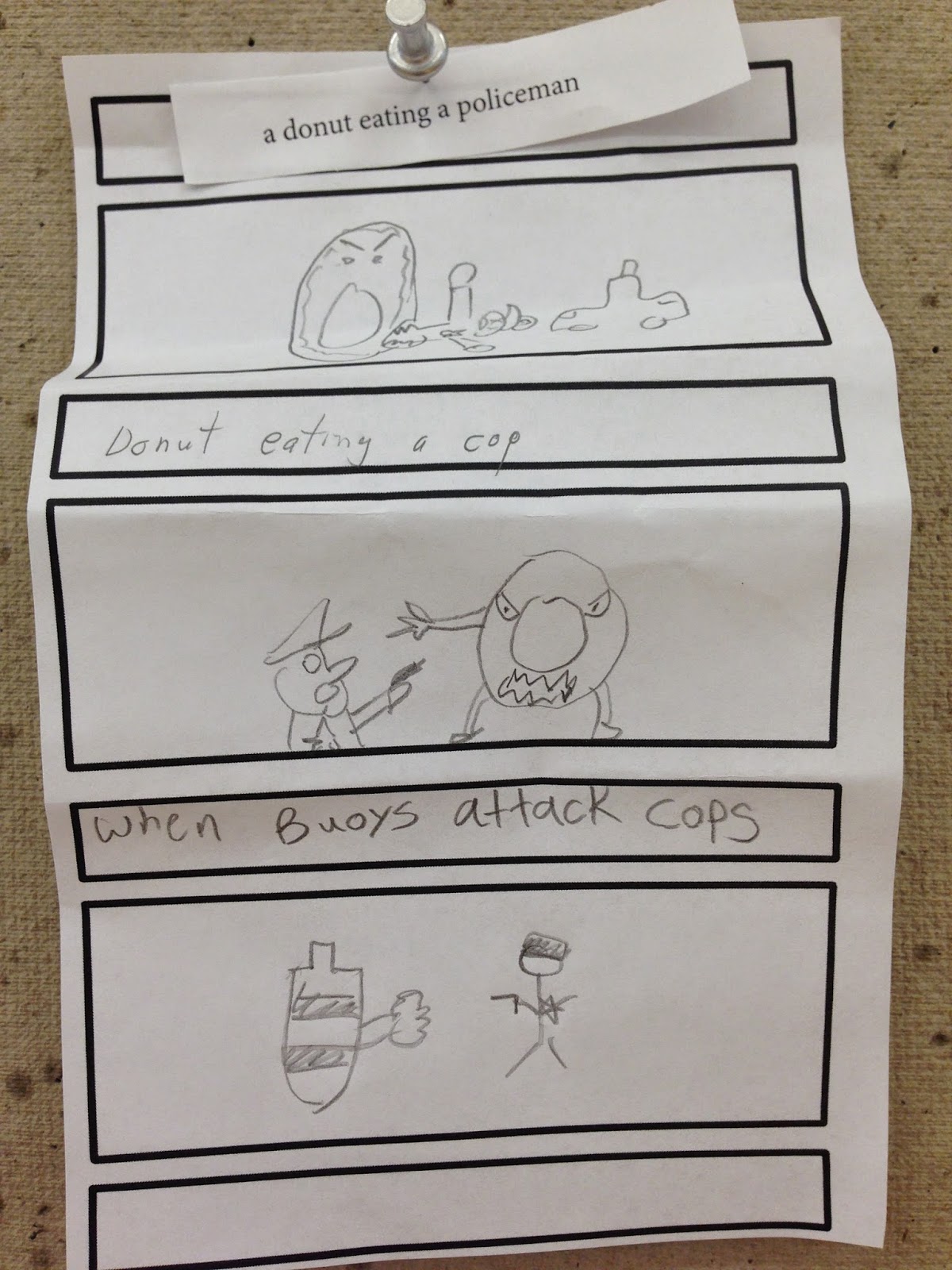 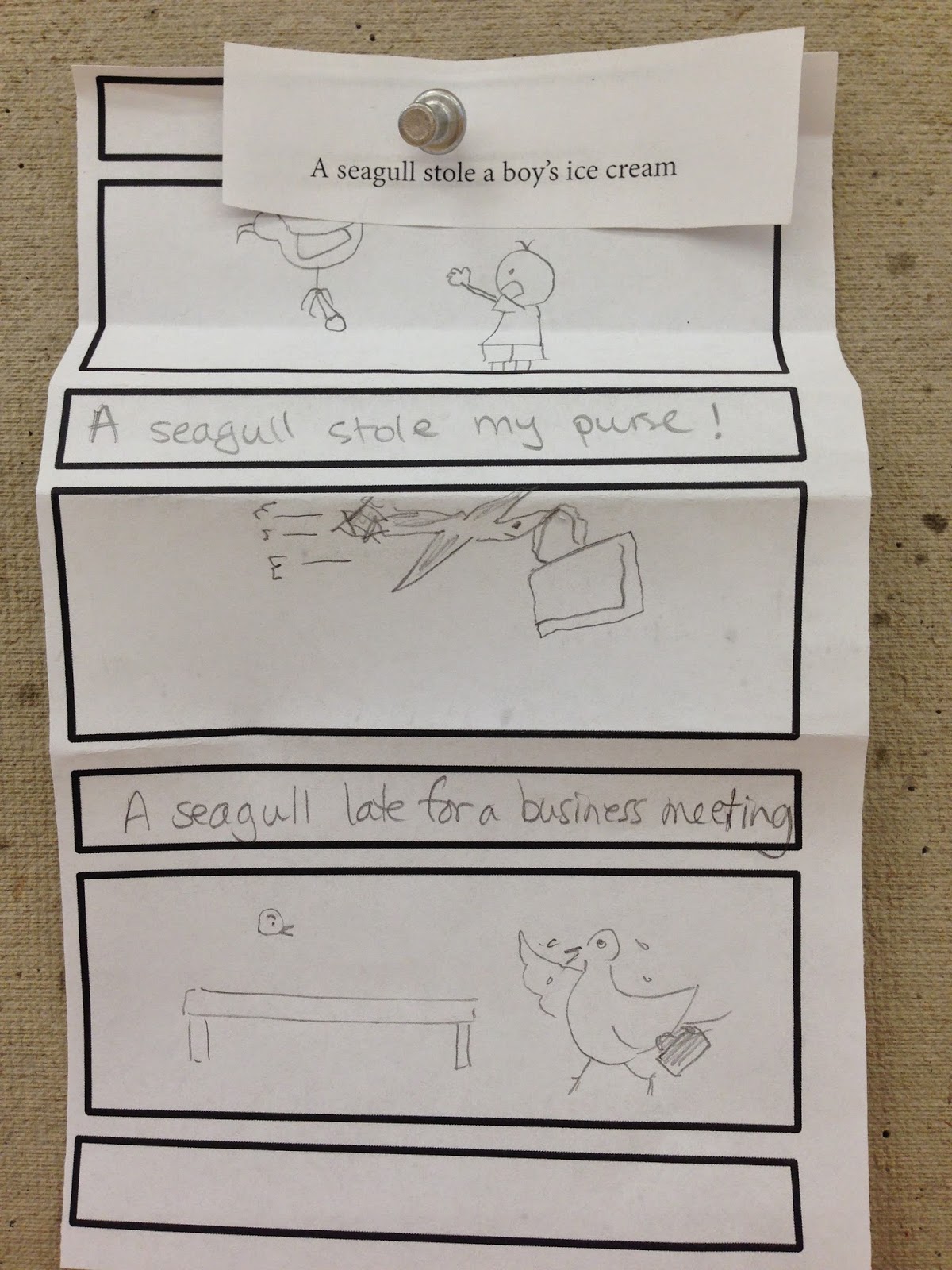 In the afternoon, we played another game. That one was like Pictionary on speed!

We also learned about gestures, layout, pacing, expressions, all kinds of serious stuff.

Here's my unreadable photo of some of what I worked on today. 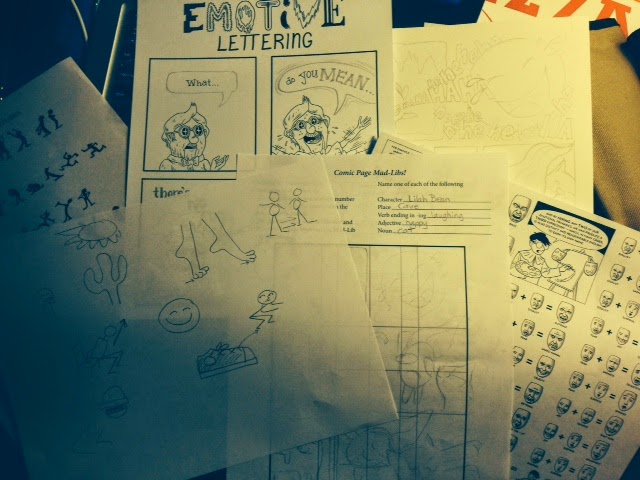 I particularly love lettering. No surprise there. It was fascinating to see how much can be told about the character and story just through the way the letters of the dialog - and the speech balloons - are rendered. We also penciled another comic page (the pale sheet in the background) that will be inked tomorrow. My story is about a Lilah Bean who almost gets arrested for laughing in a cave, but is saved by a happy cat.... oh, did I not mention we also played Mad Libs and used them to design a comic page? There's another great idea if you have trouble with "what should I draw?"

This evening we had a lecture by Steve Bissette, who is wicked famous. He is even on Wikipedia! Alright, who am I kidding, "lecture" isn't the right word. We laughed hysterically while watching nuclear bomb propaganda films and an episode of Ultraman. (Who also has his own Wikipedia page, but is not nearly as clever as Steve Bissette).

Steve told us the history of post-apocalyptic film, illustrated with previews from the films he mentioned. Then we ate popcorn and watched "The Road Warrior" - also, unofficially known as "Mad Max 2" which changed the world (of sci-fi) forever. This was before movie ratings, so there are some really gross, though engrossing, yicky bits. And - women are treated... badly, and the bad guys look like they belong in a porn flick. Or maybe "50 Shades of Mad Max." But it actually has a great plot. Who knew? Then you can move on to Thunderdome. There was another movie shown after, but I could no longer feel my lower half so I headed out.

Mad Max also has great learning experiences for cartoonists - like character development. And I learned a rule I had not known, yet had actually recognized from years of reading X-Men - once a character has been tagged in some recognizable way, they must not EVER change their clothes. That works well in Mad Max. Where would they get clean clothes anyway? And some of those guys... well, I'm sure they lost the instruction manual for their harnesses years ago.

Tune in tomorrow to learn the secrets to quick and easy, do-it-yourself INKING!
Posted by Sandy Steen Bartholomew at 12:30 AM