We finally got to hold our comics in our hot little hands! To recap - yesterday, we had two hours to draw our page and ink it. We went from brainstorming the story, characters, etc. right through to silkscreening and assemble... in one day. Phew. Today we did a critique of the pages.

Here's the front and back covers: 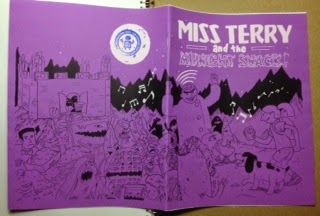 Here's a collage of some parts of interior pages by various classmates: 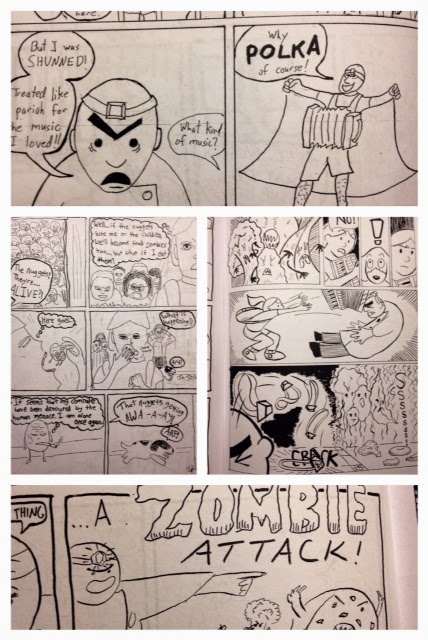 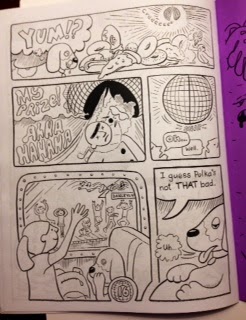 And a couple close-ups: 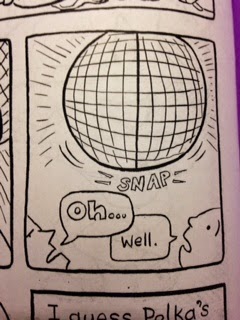 The evil doctor, Snackenstein, gets pulled up into the disco ball by the ghost of Lord Clefer. It snaps shut behind them. In the next scene Miss Terry, the sleuth, is back on the train, having solved the problem of the Zombie food and the grateful Danceylvanians are dancing her off at the station. Frankfort, the dog, has eaten way too much de-zombie-fied food. Yes. It IS a very strange story! 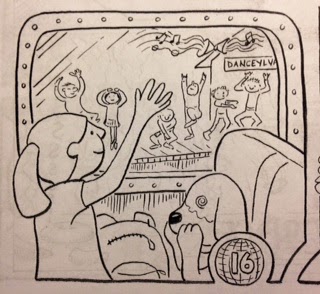 Oh, and in case you were wondering, yes, I did illustrate my notes this week: 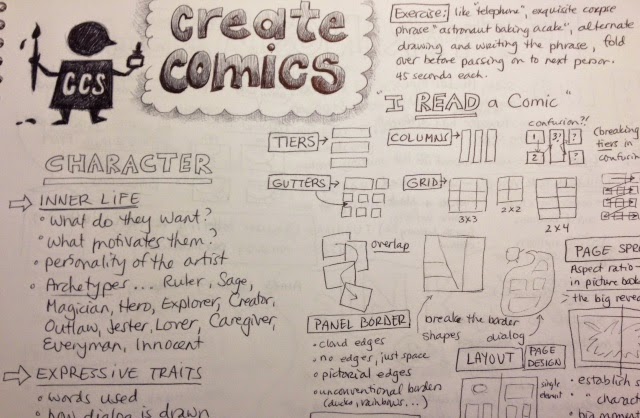 After the critique, we had a great presentation from Steve Bissette about producing, distributing and marketing our comics. He gave us all copies of his comic, Tyrant, and I got mine signed. 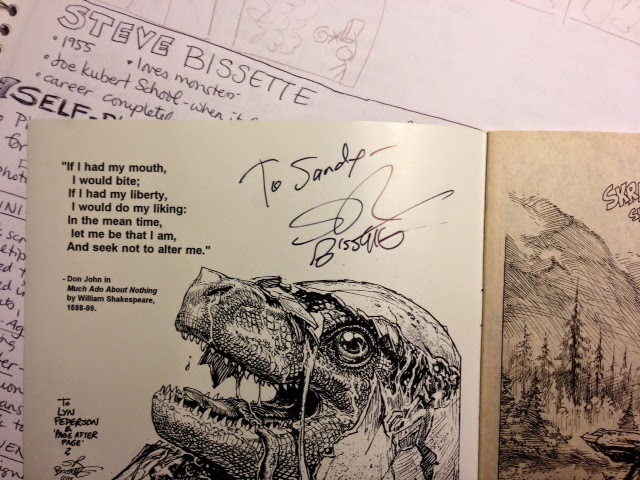 Although he draws mostly monsters, he draws them SO well. And I grew up reading Swamp Thing and seeing his name on the covers. It is just so cool to have had two classes with him this week. (He also did the post-apocalyptic movie night). It was sad to have the camp end. :-( And most are headed back to their regular lives. A few of us are continuing with the Symposium.

During lunch - I FINALLY got to walk around the corner and visit Vermont Salvage. Amazing place filled with reclaimed clawfoot tubs, doors, weird furniture, doorknobs.... I saw so many things I wanted to photograph and sketch. And a few things I wanted to own! 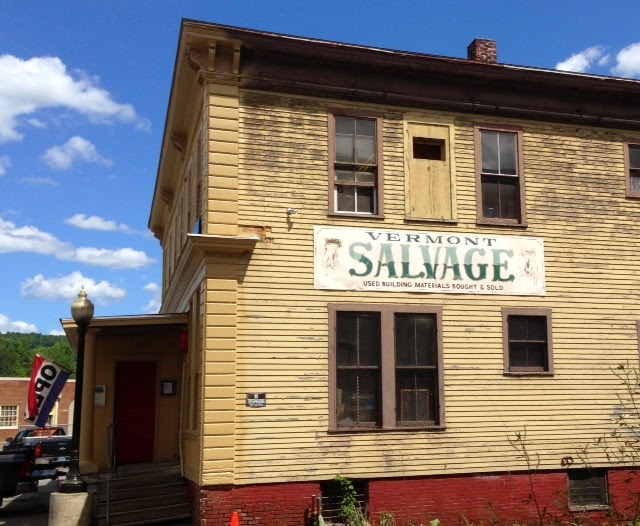 The antique train is parked at the train station. It provides an incredible contrast to the Amtrak trains screeching by and the train that pulls the huge packs from the paper mill. 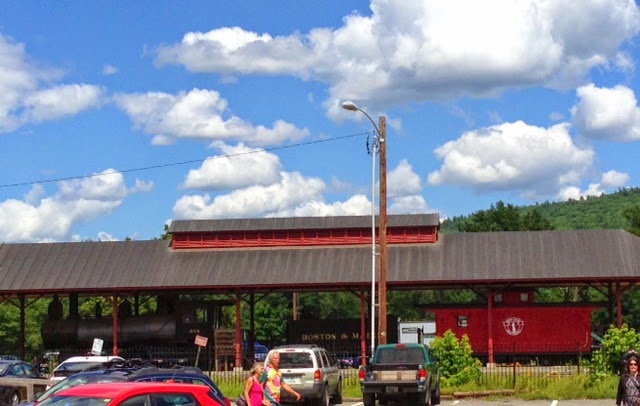 Then, it was time for Part Two of the comic adventure. This one is more theory, not drawing. The Symposium for Applied Cartooning is geared toward teachers and librarians and how to use comics and cartooning in the classroom. I am really intrigued by "Applied" cartooning and want to learn more about it.

As an aside, two asides... 1. My Zentangle for Kids! book is now part of the Schulz Library collection! Woohoo! and 2. Although I have no need for another tote bag, these we pretty cute. Linus is on the other side. Someday, I might write a comic book about all the retreats and conventions I've been too, called "Yet Another Tote Bag." 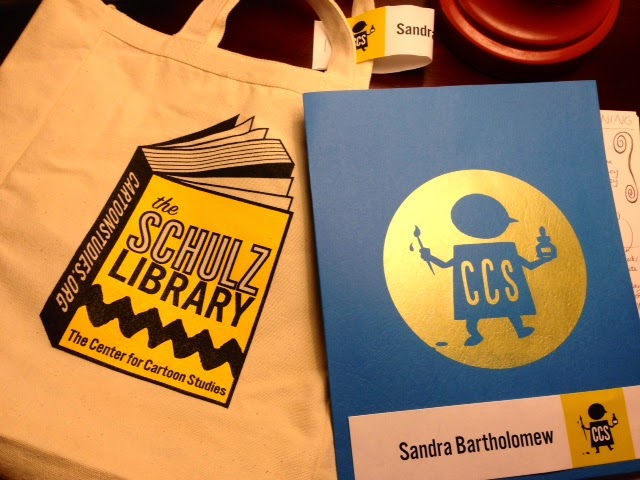 The keynote was by James Sturm who founded the Center for Cartoon Studies in 2005. He did an interesting lecture on the history of Haiti (none of which I knew) and then told a story about a Haitian hobo and his monkey in White River Junction, fruit from Haiti that came through on the train, voodoo curses, lost comic artwork, and bizarre serendipitous events. All to illustrate how a good story can pique the listener's interest, make them care about something (like the history of Haiti) and intrigue them enough to do more research to learn what is fact or fiction.

We had some discussions, varying opinions, about how to plan a curriculum and the validity of using fiction with kids who are increasingly susceptible to believing everything they hear and see (I don't believe that) and how to get people to draw comic images, even if they don't believe they can draw. Ed Emberley was mentioned because he uses shapes and icons to represent characters and objects and anyone can draw his shapes. Comics are about telling a story, not just illustrating a picture, so the quality and detail of the images are not as important as getting the story across. 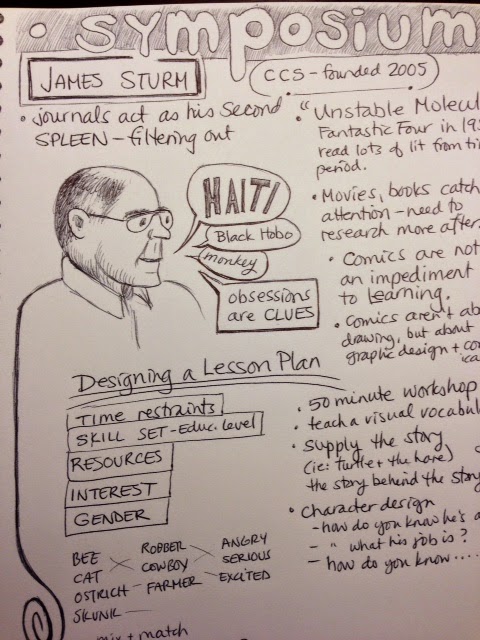 Later, for her birthday dinner, we took my mom out to Elixir's, an upscale restaurant, with no childrens' menu, but farm to table food. I can't even describe how delicious the food was, but Lilah gobbled down everything in front of her (as did mom and I!). I'm sure you are very curious to see what our deserts looked like? They were so pretty we had to take pictures before we would dare to eat them. Lilah noticed that each was served on a different shaped plate! 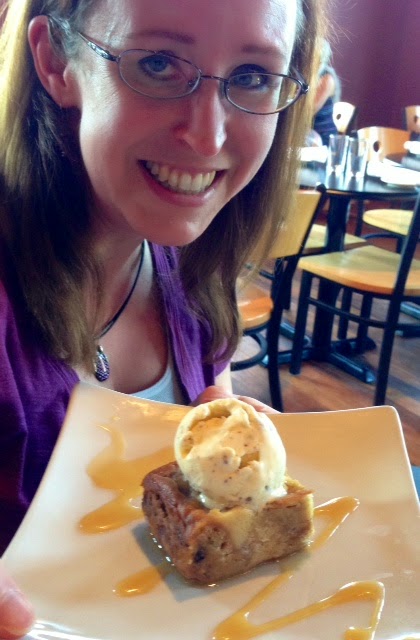 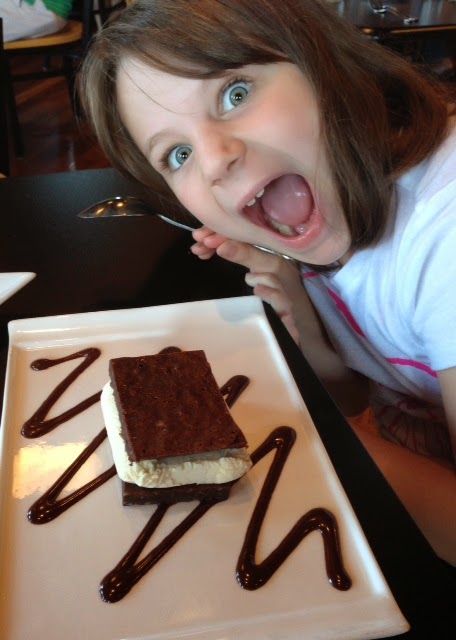 And mom had strawberry-pineapple (?) sorbet on a triangular plate... 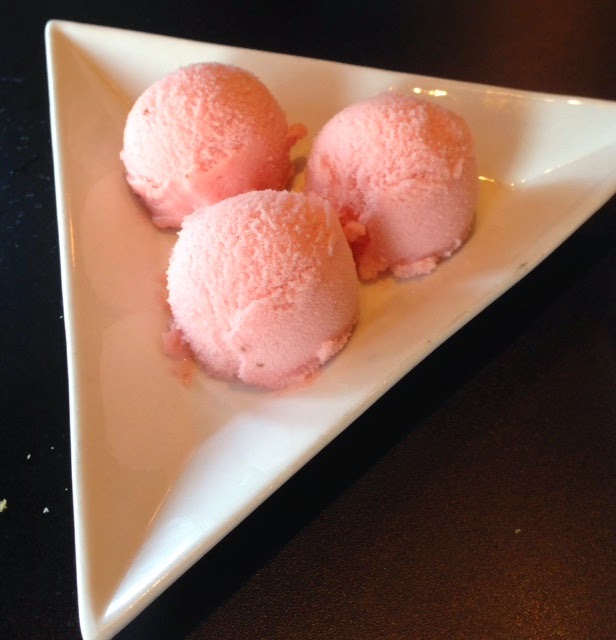 Even the ice cream was made at Elixir's.
I think we all felt like the dog in the last panel of the comic book! (see above).
But very happy. :-)
Posted by Sandy Steen Bartholomew at 12:33 AM