Are we there yet?

In yesterday's post, did I make the cosmic error of saying the adventure was over? Perhaps I tempted fate by stating we just had a few flights and then we'd be home? 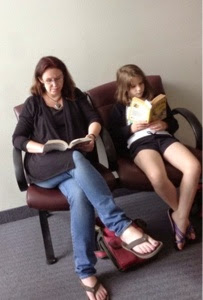 The Flagstaff airport is so small, there is only one flight arriving or leaving every few hours.  Ours was meant to leave at around 10:30am and I wasn't really worried when they announced the flight coming in from Phoenix would be a little late due to the weather. We had a generous half hour to get to our second flight, to Philly. In a different terminal. Ok. I was worried.

Then... They announced the flight was cancelled and the flight returned to Phoenix because of a low "ceiling". Uh-oh.

We were told to line up again to reschedule our flights. We heard all sorts of bits of terrible conversations while waiting. For an hour. Flights had been cancelled last night too. All flights were overbooked. There would be similar rainy conditions tomorrow. The next flight with space was after 9pm tonight... 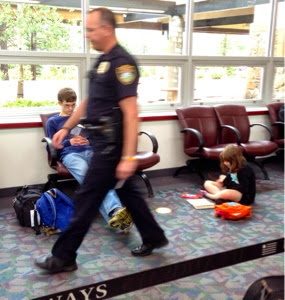 We inched closer to the ticket desk. Only 5 more people in front of us...

A flight had made it in through the "weather" and turns out the two ticket agents also do all the boarding and preflight stuff. So we waited some more... 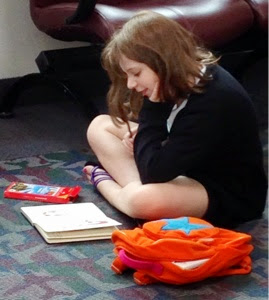 (Lilah drew pages and pages in her journal - I will have to scan them in when I get home and post them. I was so impressed with the characters she created and their Bios).

When we finally got to the counter we were told we could try to get on the 9:15pm flight which, after two transfers, might get in to Manchester, NH by dawn. Maybe. Or we could come back tomorrow morning and try again. And because the cancellation was due to weather, the airline was not responsible for our hotel costs.

Instead of screaming, I asked the agent, "I hope you do kickboxing or something to help relieve the stress?"  She looked up and smiled and said, "some days are easy. Some days are like today."

Ok then. I decided that we would find another way to get to Phoenix and asked her to find us new flights to Philly and Manchester. Finding flights with four seats on the same plane was hard, but she did it. We'll have to get up at 5am tomorrow...

And then I started to search for hotel rooms at the Phoenix airport - on my iPhone. And how to get there?!

My mom noticed a bumblebee logo on a lady's tee shirt and realized it was an ad for a taxi service. She said she could take her fare to their hotel, then come back for us.

We were having a picnic on the floor an hour later and she patiently waited for us to eat. She not only took us the 2.5 hour drive to Phoenix, she chatted happily with all of us the entire way, and wasn't phased at all at the huge quantity of chocolate muffin crumbs dispensed by Lilah over the backseat or the way her foot kept accidentally triggering the automatic windows...

If you are ever in the Flagstaff area and need a driver (busybeetaxis.com)... 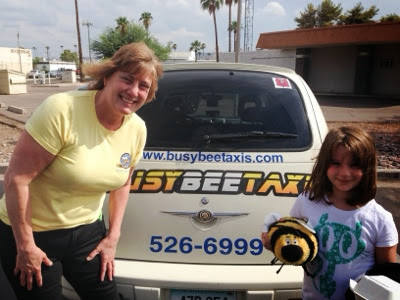 And the "bee" theme!!!? Couldn't have suited us more! She let Lilah hold her bee mascot. 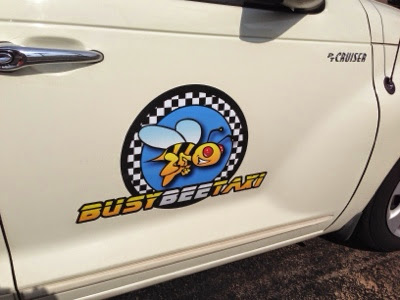 So we missed all our flights and all that.. But we got to have a yummy lunch (we'd have gone without food for 8 hours if we'd made out flight). We met a very nice lady and made it to Phoenix safely. We saw beautiful landscapes we'd have missed up on the plane. We each have our own bed tonight - no one is on the floor or a rollaway. Free wifi - we finished watching the third Season of Legends of Korra. And the little mermaid was thrilled to find an outdoor pool! 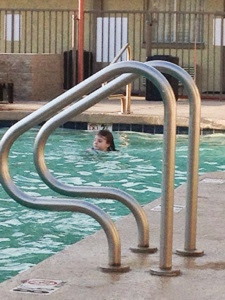 We had gone from 60 degrees and pouring in Flagstaff to a tropical 94 degrees in Phoenix. 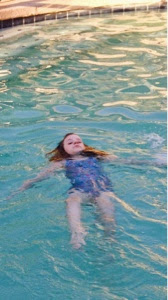 We were both quite wrinkly by the time we got back to our rooms. When I got out of the shower, Alex had Lilah quizzing  him with definitions for his English homework. "Apostrophe..."  It's like a magic spell the way he controls her... Ahem... convinces her... That what he is doing is interesting. 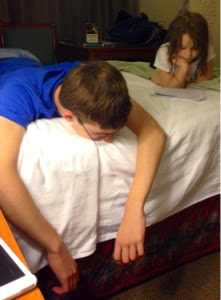 She has also been grilling me about the book I am reading, "The Lost" by Sarah Beth Durst. I am a genius mom! I discovered that she will let me read in peace - no- she forces me to read - so that I will tell her what is happening in the book! It's not appropriate for a seven year old to read, but the retelling works great.

I first learned about this author from my Bancroft School Alumni Newsletter. That first book was "Into the Wild". Modern spin on fairy tales. She has a ton of books now and this one has me spellbound. It also happens to take place in this region, where I am also "trapped" right along with the main character.

I am looking forward to the long flight tomorrow so I can finish the book!

Posted by Sandy Steen Bartholomew at 2:12 AM