We found a great bakery for breakfast then hopped in a cab to get us down to the Museum of Science and Industry. The main building looked like an art museum, but we entered through a nondescript little building by the road.

I was so shocked to see what looked like a huge underground city spread out before us!!!?  It was a little like going down under the glass pyramid at the Louvre... Except here was a shiny train and flashing lights... And then we created tornadoes and avalanches, watched experiments with different colors of flames and explosions, saw an exhibit about Disney and animation and an amazing princess castle created from Legos, watched a tiny train travel from Seattle to Chicago, stared upwards as the landing gear retracted into an airplane directly over our heads... 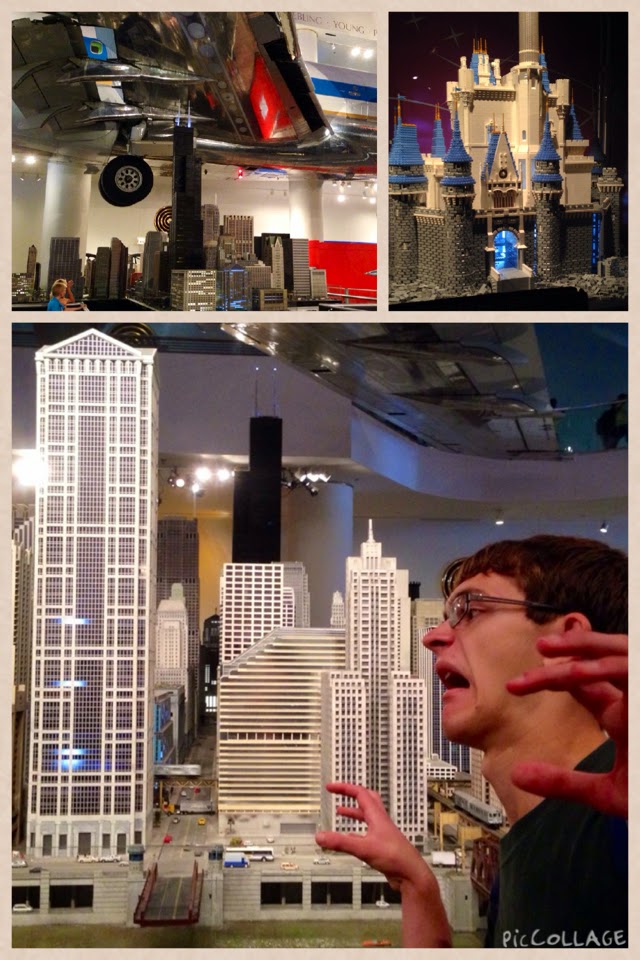 We saw the insanely amazing miniature Fairie Castle with painted story murals, King Arthur's Round Table, mermaid bathrooms, a chapel with a real sliver of the cross, diamond encrusted chairs, and real, teeny, books in the library! 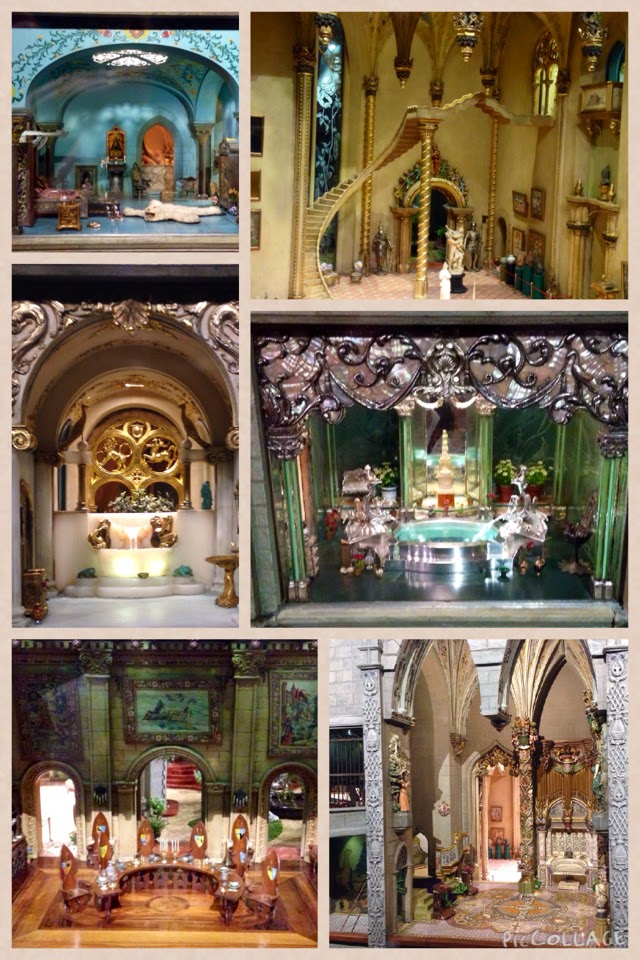 We could have spent hours there except the crowds were overwhelming us and we needed to be at the University of Chicago ASAP for a campus info session and tour.

I admit I was as excited as Alex to visit UChicago! I didn't get to do the traditional college tour thing. A shame, because I might have ended up here instead. I wanted to major in Egyptology and there were only three schools where I could do so. UPenn, UChicago, and Brown. Brown was the only one close enough to my home to visit on my own. I have always felt disappointed in my choice, and now I know why. But... If I hadn't gone to Brown... I wouldn't have my kids.

I've always wanted to see the Oriental Institute too - which is like Mecca for Egyptologists. I've only ever seen the items in the museum, in books. Standing in front of the gigantic lamassu, with its man's head and animal body, my heart racing with that old geeky excitement... And the Egyptian statues, Sakhmet, and the mummies! So maybe I was never meant to be an archaeologist, but there is something that calls to me so strongly when I see these ancient relics. 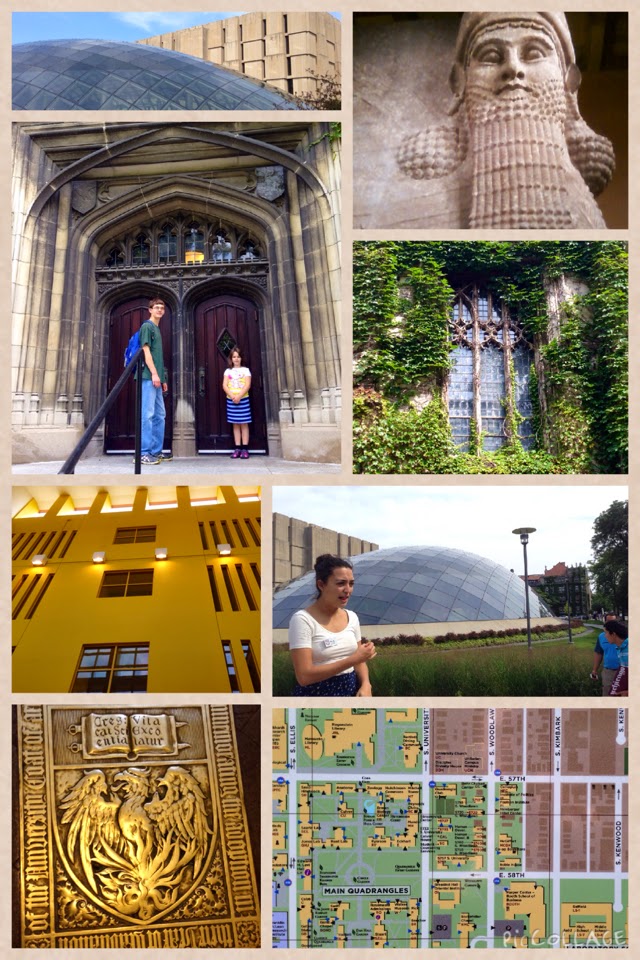 The tour was quite impressive and a bit of a shock... We went from the gothic, ivy covered quad to the ultra modern enormous library and bright yellow dorms. To a student center that I swear was straight out of Harry Potter - complete with Phoenix embedded in the ancient floor tiles.

The Rockefeller Chapel left our jaws hanging open as we listened to an enormous bell chiming music from somewhere out of sight and organ pipes protruding from everywhere. 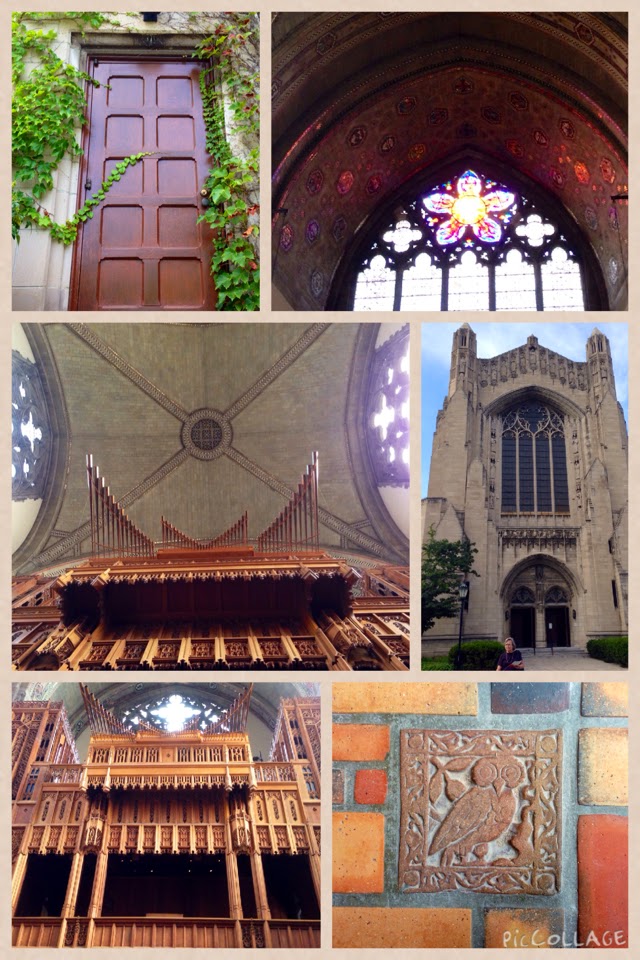 I think we were all stunned, and exhausted, yet so excited about everything. 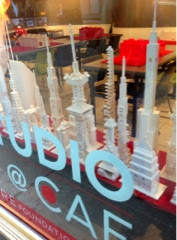 And we passed a Lego Architecture Studio. Seriously!?  I understand why people live in cities now. How have we survived in a town so small it could fit inside the huge fountain we passed by this morning? 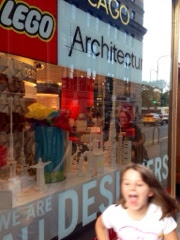 We didn't stop moving long enough to do any journal pages, but we burned enough calories to eat whatever the heck we wanted for dinner!! I had chicken carbonara and a caprese salad.  Oh, serious, yum.

Lilah seems to be adjusting to the city already - and then we head out tomorrow! But we are already making plans for what we will see and do WHEN we return. And WHEN Alex comes to school here. He asked what will he do - how will he choose- if he gets accepted to both Dartmouth AND UChicago?

I don't envy him these decisions, but I pointed out how lucky he is that his parents aren't pushing him or limiting him. He may not be able to afford to go to some schools, but he is free to apply.

I have been wondering lately- with Alex's talent for languages and his history and science skills- perhaps, sometimes, our dreams are not ours to realize, but merely premonitions of our kids' futures. I am so excited to see what adventures they choose to pursue.

Posted by Sandy Steen Bartholomew at 12:47 AM