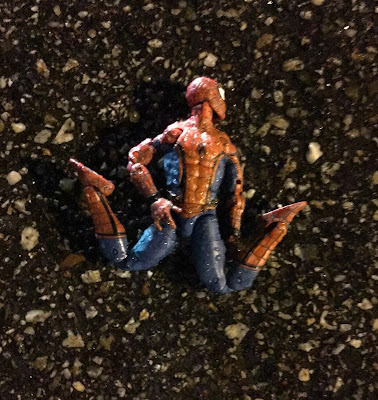 My friend Debbee and I were leaving a really lively SCBWI illustrator's crit group at BAM! last week. We were the last ones out of the store and we stepped out into a cold, wet, dark, empty parking lot. Some passing headlights glinted off what I thought was a flattened, bloody, rain-toad. With a weird combination of shock and recognition - I realized it was actually a flattened Spiderman action figure!

Squatting on the wet asphalt to photograph Spidey's tiny... corpse... I was overcome with sadness and the futility of striving for greatness.

I left the body there. Although I had the beginnings of a graphic novel forming in my head...

Last year, at CCS, we were challenged to use a popular film, and a randomly chosen theme, as the inspiration for our own graphic novel. I combined Maze Runner with Trailer Parks to create OSFO PARK. OSFO PARK is still in the Only-Partially-Formed-But-Potentially-a-Great-Story realm.

Looking at the corpse of Spiderman laid out so carefully on the ground - I had visions from Dan Brown's The DaVinci Code! Just as Saunière's body was laid out to form a clue... what is Spidey's body trying to tell us about his killer?!  The positioning, the hand gestures, the tilt of the head... Instead of the Brotherhood of Sion, we've got the Brotherhood of Avengers! And set in the world of Marvel and DC? You think the Bible is controversial - you ain't seen nothing yet!
Posted by Sandy Steen Bartholomew at 9:55 PM