Get your freshly printed Demons! 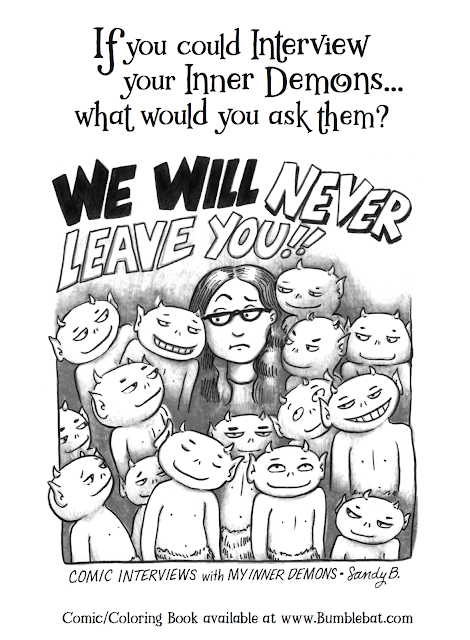 I have a new printing of We Will Never Leave You comic/coloring books. It's very exciting to think that I actually sold (and gave away) all the copies I printed this spring!

I thought I would show you the "behind-the-scenes" for creating this comic, but, if you are short on time, here is the most important part... you can now get your own print copies and/or download a PDF version, from my Etsy store. I've also added a pack of 5 comics for a reduced price - for those of you who would like to give the comics as gifts. And if you want the fabulous, deluxe, Thesis-edition - there are a couple still remaining (from the Kickstarter). 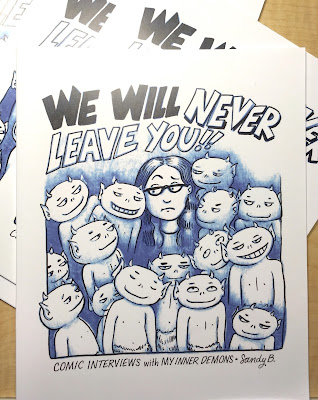 Here's the description for We Will Never Leave You:

This is no ordinary, relaxing, meditative comic book/coloring book. Oh, no - this one is actually quite stressful, but will leave you feeling reassured... in the end.
Perhaps.We Will Never Leave You is a comic interview with my Inner Demons. With special guest appearances by OCD, Anxiety, Creativity and others - We Will Never Leave You is a fun romp through the lovable mess in my head.
And perhaps, your head too?This print version features 12 B&W interior pages printed on lovely paper perfect for markers and colored pencils. You can color on both sides of the paper with no embarrassing show through.About 7" x 8.5" in size. 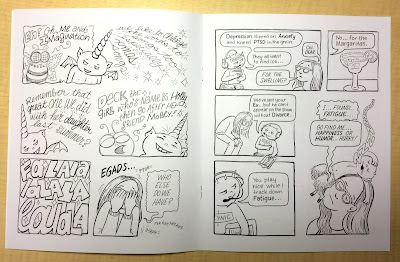 The Evolution of My Inner Demons

Well.. I think the Demons have always been there, but this is how these particular representations of My Demons happened.

It began with a big anthology project during my first year at The Center for Cartoon Studies. The theme for the anthology was "Speak of the Devil" and I created a comic called "The Little Devil" (which I really SHOULD turn into a mini-comic...) 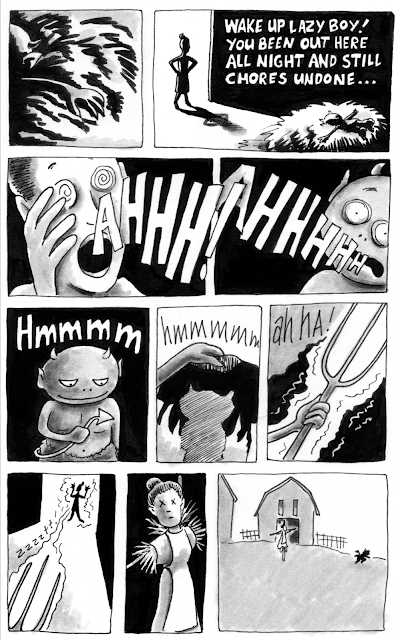 The character sketches were based on some drawings my daughter and I created - a little boy with a devil t-shirt - he gets struck by lightning and becomes the devil creature... 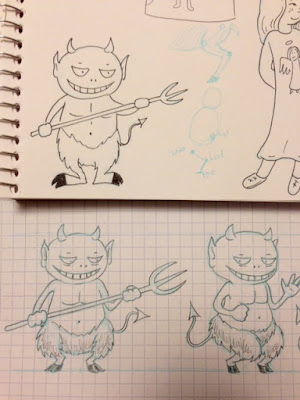 The character stuck with me and I found myself drawing it in my class notes... 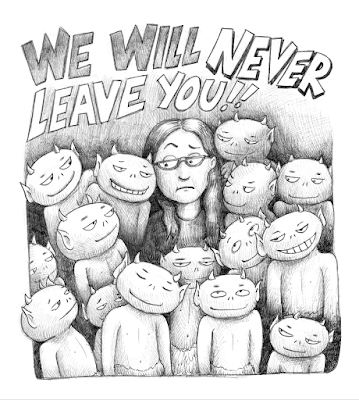 During a summer program with Alec Longstreth... on the first day of class (Monday) we were given the assignment: Create an 8 page comic, inked, and printed, due Friday morning.

I spent the first day getting to know my characters and what they wanted, what they were afraid of... 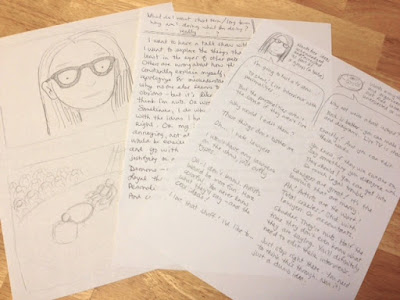 Then I started sketching out the plot line and some dialog... the blue pencil grouped the images, etc. that I thought belonged together on each page. 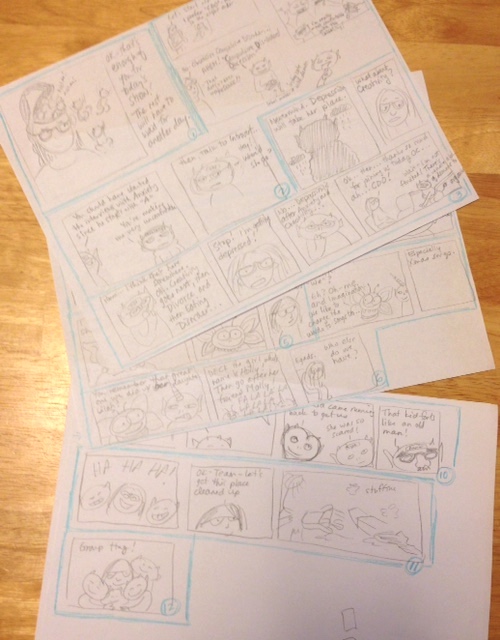 On Tuesday, I rearranged those bits and pieces into panels and thumbnails. The thumbnails are tiny representations of each page's layout. I quickly realized I needed extra pages to tell the story. My 8 page requirement grew to 12! (With this kind of project, you have to work with pages in multiples of 4. A sheet of paper folded in half equals four pages.) 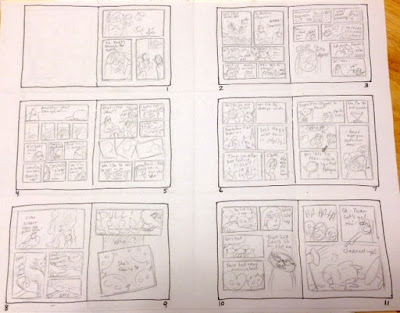 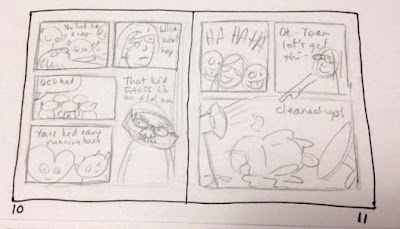 On Wednesday, I blew up the thumbnail sketches and started refining, adding details and text. This is the same page shown above (page 10) but in full-size pencil sketch form... 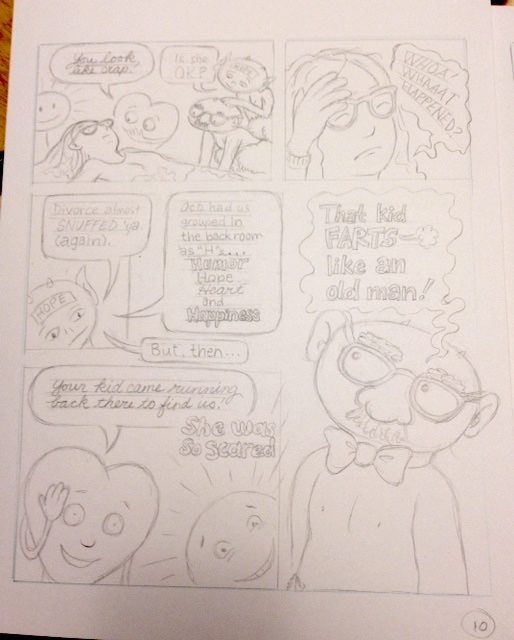 This is a full progression for Page 1, from blue penciled sketch layout, to pencil sketch, to final inked page. 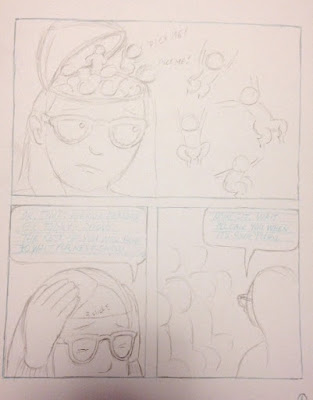 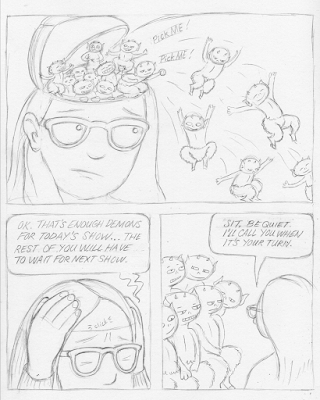 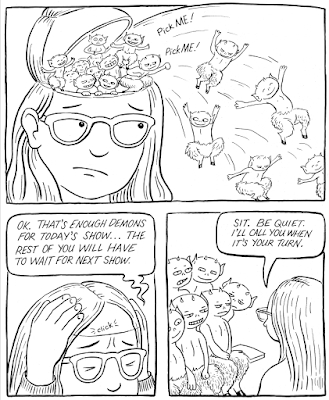 On Thursday I finished inking all 12 pages, then scanned, cleaned up, and laid out the pages in InDesign. 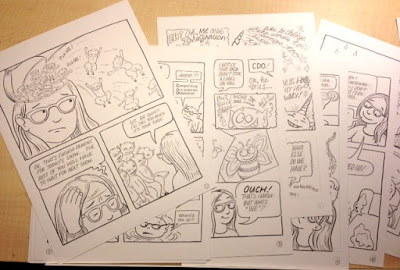 Friday morning, I printed and assembled the comics! I used the original class doodle-drawing as the cover, but I redrew it quickly in marker to match the style of the comic. 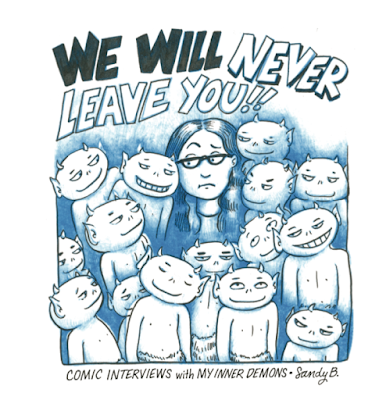 Normally... I would have used gray marker to add shading and depth to the pages, but there was NO WAY I would have had the time to do that for this four-day comic! So... it is a "coloring book" and you can add your own colors. I started playing around with colors and was surprised to learn that my Demons are purple-y!? I'd still like to do a version all in grays... 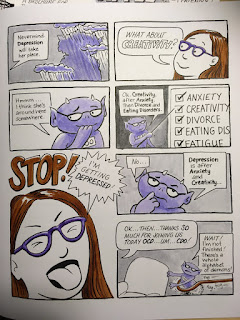 Meanwhile, back in the Thesis... the Demons had started creeping into my daily comics - not all my Demons look like little devil creatures! The Heart (Self-care), butterfly-bug (Creativity), Lilah Beans (yeh, well, they're Lilah Beans!), Dragon (my inner Bitch... more like "Puff" than "Godzilla." I need to work on that...)

It was getting pretty noisy in my head! Everyone had their own opinions... 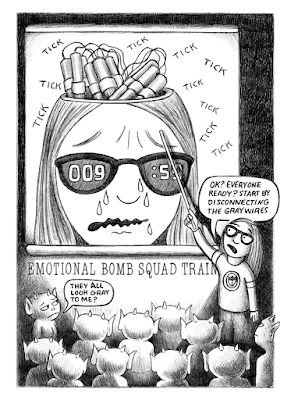 But the Demons could also be very helpful and I was starting to take comfort from the fact that, well, they would never leave me.

I decided to feature them in the second issue of BEGIN AGAIN, "The Issues Issue" (ha ha!). I think it took longer to design the cover than it took to create the mini-comic! But it felt really good to "flesh" them out in watercolor and gouache. 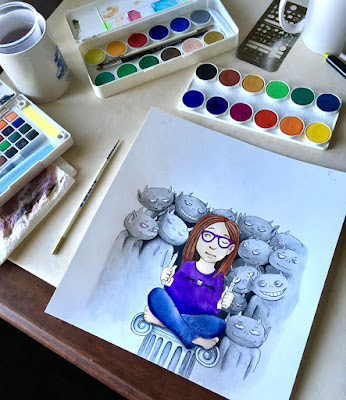 I hand lettered the title - tangled "BEGIN" and used a folded cola pen to draw "AGAIN" with all the great splatters. 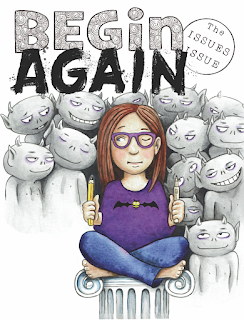 I added the rest of the text in Photoshop. I think it really looks like a magazine! (There are still a couple of these left on my Etsy site.) 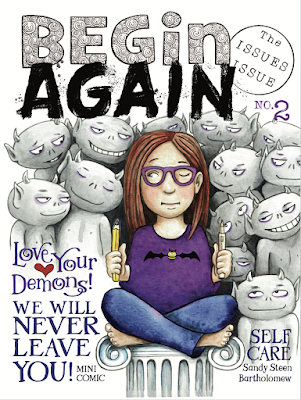 Group Portrait with my Editorial Staff! 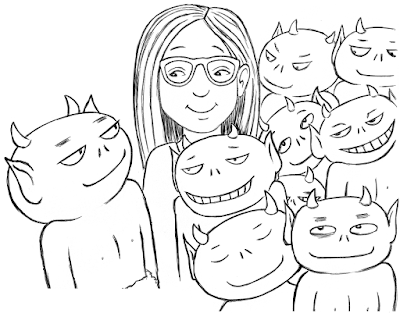 Posted by Sandy Steen Bartholomew at 1:19 AM No comments: 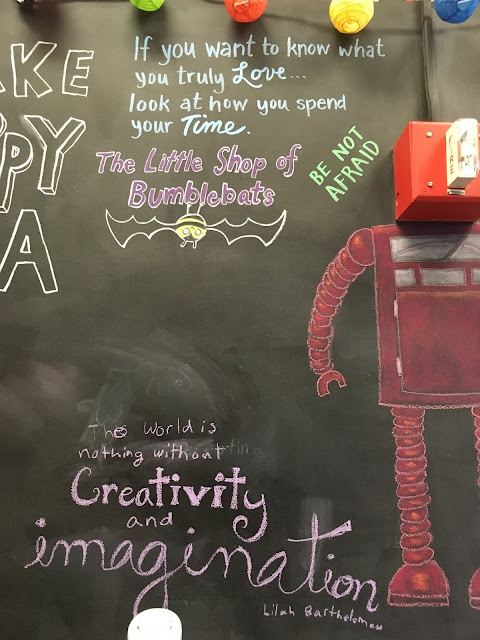 Did you miss my Open Studio back in September? Well, you have another chance to see my new Studio (Art Closet!) at CCAC - the Concord Community Arts Center - at 40 Thorndike Street in Concord, NH.

This Saturday, November 18th, from 9-5pm the CCAC will have lots of Open Studios AND a big Crafts Fair!

I'll have my Zentangle books and cards, Comics, Holiday cards, tattoos, some other stuff... and I'll have a few buckets filled with my rubber stamps that you can bag up for really cheap - great stocking stuffers!

PLEASE come and visit me! You know how crazy these things make me - give me a hug, tell me something encouraging - and I'll give you a sticker or tattoo. ;-) 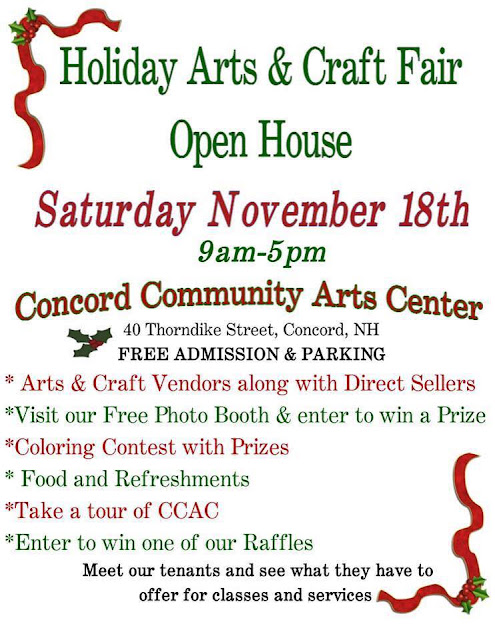 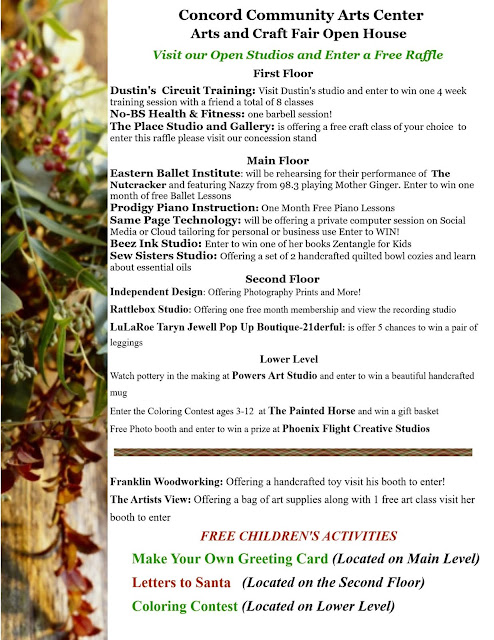 Four different ways my life could have manifested itself today - if I had made slightly different choices along the way. I can't... and don't want to... explain it any more than that. 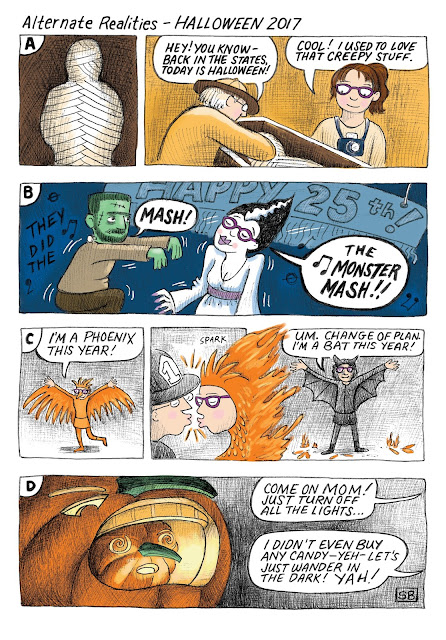 Here is the original ballpoint pen comic I drew - I'd love to hear your thoughts... 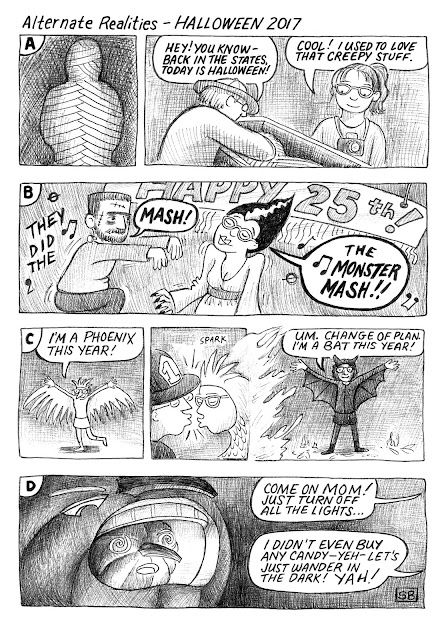 Posted by Sandy Steen Bartholomew at 1:11 AM 4 comments: