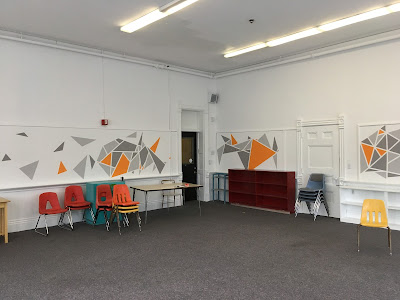 The room is about 850-square feet - It's big and bright - lots of windows, and painted white. (I can fix that though...) 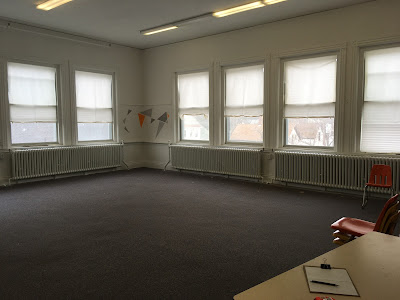 It's about a gazillion times bigger than my current studio... 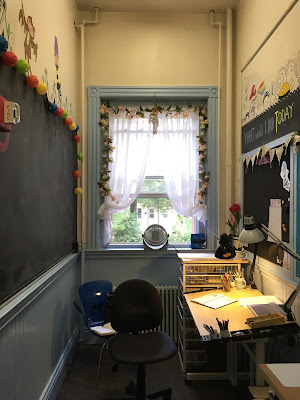 Which means I could have more than three friends in there... 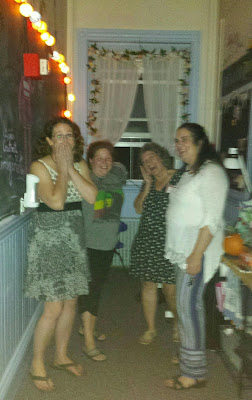 ...and we could even sit down!

This Possibility just happened on Friday... I joked to Laurie that I needed a "sign from the Universe"... since I obviously don't have that kind of money... I said:
"If the Universe thinks I should do this, there will be a check
in my mailbox by the end of this weekend."

I thought - maybe I'll get the payment for some of the science kits from Montshire!

No check on Friday.

No check on Saturday.

So I tried NOT thinking (obsessing) about it.

On Sunday, I got up the courage to go to White River Junction (VT) for a Cornerstone Creative Community (3CVT) Mash-up and met some very cool people. Matt Bucy (Tip Top Bldg. and American Legion bldg.) and Eric Bunge from the Northern Stage and a lady who runs a maker space... Very exciting. I was exhausted AND hyper and desperate to be a part of this sort of thing too! I want an art community! A Collaborative Creative Space!!! 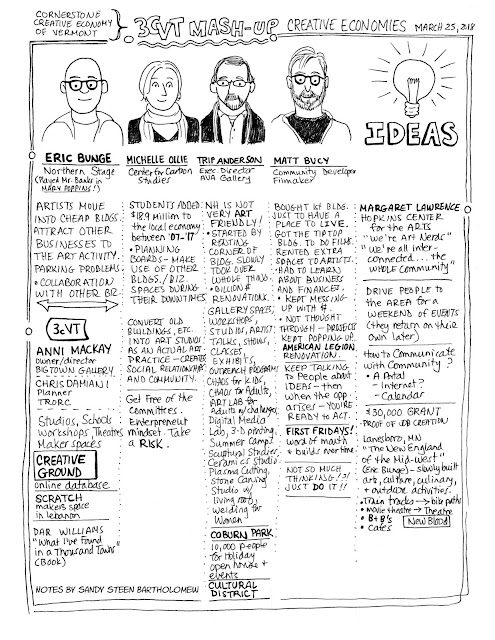 At the end of the Mash Up, I went up to these really cool graphic facilitation diagram-sketch-things on the wall... 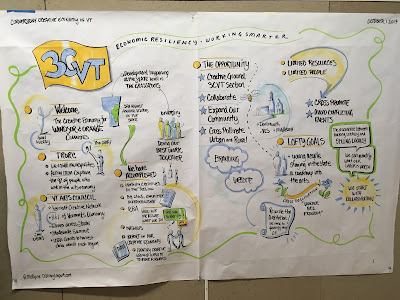 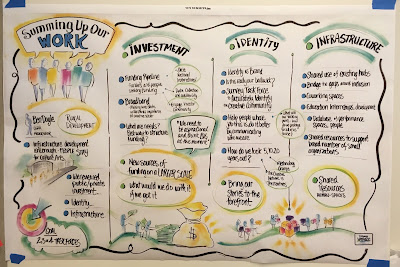 I took out my phone to take photos of them - and I saw a text from the CCS student who is now living in my former apartment. She said some of my mail had been delivered there and where should she send it?

Guess what it was? 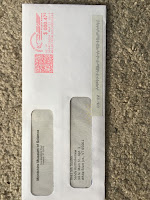 Let this be a lesson to trust in the Universe, but be as specific as possible...

I should have said,
"If the Universe thinks I should do this, there will be a check
in my CURRENT mailbox by the end of this weekend."

So the Universe delivered the money to my mail box before the end of the weekend! And I now have a lease for this crazy-amazing STUDIO! And I have begun my OCD (CDO!) process with floor plans and I made a visual catalog of all the displays I could take from the Wingdoodle building and my home and home studio... 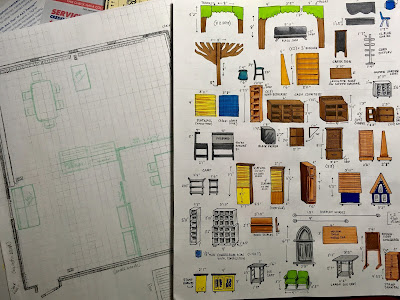 Yes, I measured (and colored) them all.

I'll let you know what transpires. I have to go tomorrow and move everything out of my tiny studio and uuuuuuuuppppp to the second floor... doesn't seem like much is in there, until I have to move it!

If you have been thinking how you'd LOVE to be part of a vibrant, creative, collaborative studio space filled with lots of art toys and workspace... I am looking for about 8 fun, positive artists/crafters/ Zentanglers... to share this space with me! I might do a Kickstarter, but if this sounds like you - let me know you're interested.

And here is some artsy inspiration from the walls at my daughter's elementary school. It made me want to MAKE STUFF! Enjoy. 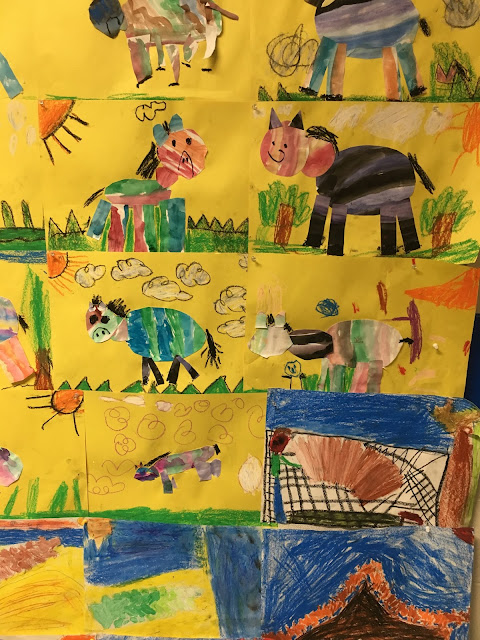 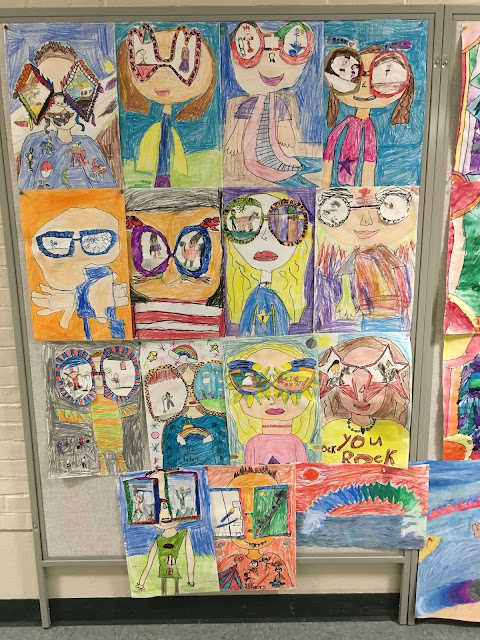 Posted by Sandy Steen Bartholomew at 12:29 AM 6 comments:

A Peek at Pics in Progress

Here's a peek at some of the stuff I'm working on right now...

This picture shows a progression for one page of the science comics I'm doing for the Montshire Museum of Science and Dartmouth College - This is a few days worth of work! And, yes, I DO the actually experiments.

It starts with some written directions, lots of web research, then my sketches in blue-pencil, then inked lettering and drawings, scan and clean up in Photoshop with text instructions added, then a color version (the one shown is for Rock Candy as I haven't done the color version of DNA yet). 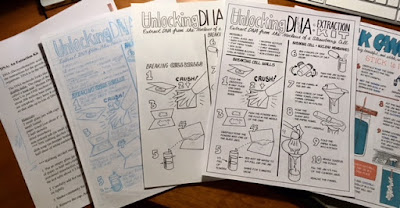 I've also started on the watercolors for "Ready, Set, Gorilla!" - a picture book by Melissa Stoller that I'm illustrating for Clear Fork Publishing.

I put the sketch on my light box and do the watercolors... 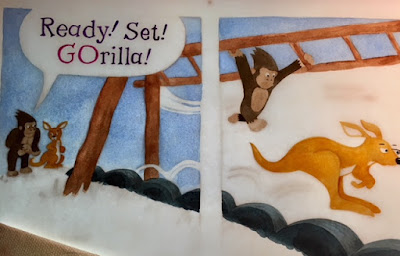 Here's the same piece, off the light box, with all the blocks of color painted in. No details yet. 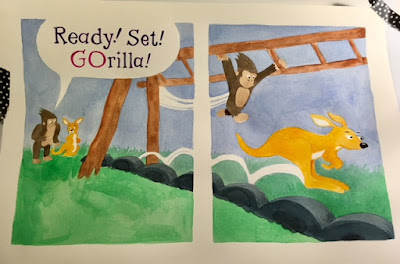 I do about four or five spreads at a time so pages can dry completely. The page in the back, with the slide, is finished. I added the details and shading with colored pencils. The slide ended up being changed to bright yellow after I scanned it into Photoshop. 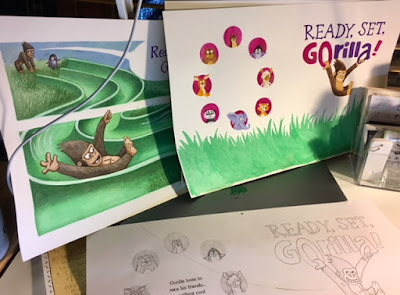 Tomorrow is a Snow Day - so I'll hole up in my studio and finish off these pages (and a couple more). I love this stuff - but I also think it's nice to have these two very different types of projects to go back and forth between!

My idea of heaven... drawing and coloring in my studio... no distractions or interruptions and the most pressing decision I have to make is... "hmmm, Prismacolor pencils or Inktense pencils...?"

Posted by Sandy Steen Bartholomew at 12:52 AM 4 comments:

Give me some Sugar!

Last week I did a really fun project for Red Kite Candy's "Candy Lab" - I designed the candy box label for the latest winner - Apple Pie Caramels. They are only available for a limited time and the money goes to Food4Kids. 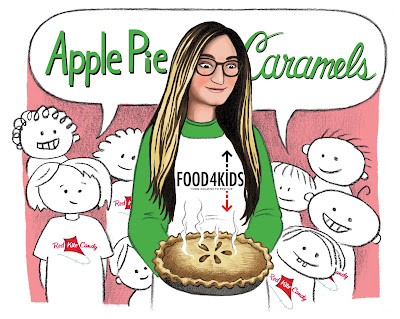 And, NO, I don't get paid extra for promoting this - I just wanted to show off my artwork - and I think this is a cool way to raise money for a great program...

oh FINE - I admit it... I'm hoping someone will order some of these amazing caramels and SHARE them with ME!!

Your Winner is here! 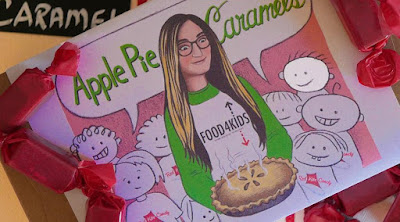 Get your Apple Pie Caramels before they're gone. Support FOOD4KIDS and order yours before midnight Sunday.

(As always, 100% of profits go to our Candy Lab partner,
currently FOOD4KIDS)