Looking for My BEES!

I know you've been reading this blog, drooling over the photos of the new studio and wondering, "WHEN will I get a chance to get in this space and snoop around!?"

OK! OK! How about Sunday?

I just created a Patreon project for the studio - Patreon is kind of like doing a Kickstarter (crowd-sourced funding) - but it's spread out as a monthly pledge rather than an all or nothing mad dash. As a (crazy?) incentive to get you folks to take a look at the Patreon for The BeeHive Studio (I could really use some feedback!!) I'm adding an extra, sorta-secret incentive... since Patreon processes the pledges on the first of the month - anyone who places a pledge (for any amount), by June 1st, will be invited to a private [Open] Studio on Sunday!

The best way to find out what's going on is to come and see and ask me questions in person! I know you'll love The BeeHive as much as I do - and you can be a part of molding this studio into the creative, buzzing, art clubhouse that we have all be searching for!

My comics Patreon page: https://www.patreon.com/SandyBee
My website: www.SandyBartholomew.com
Posted by Sandy Steen Bartholomew at 1:45 AM No comments: 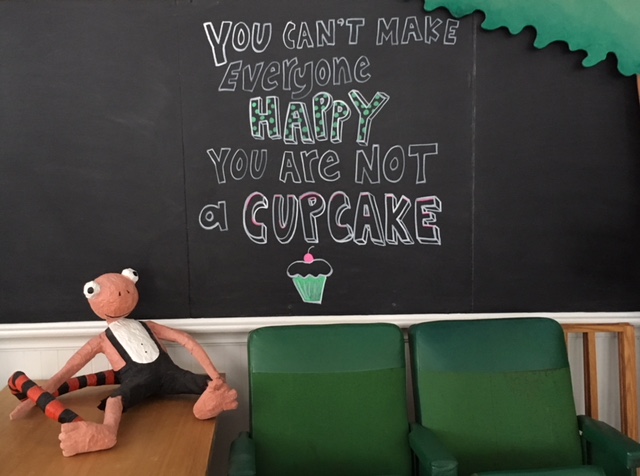 Well - I MIGHT be... definitely the "muffin-top" looks familiar...

I've been bringing furniture, storage stuff and lots of books and art supplies... one carload at a time... up to the new studio. The BeeHive looks like a real studio now, but it still needs murals and I've been missing the quotes from the previous space.

Today I cleaned and organized and got my first quote up on the chalkboard! Hurray!
I hope to invite some folks over to help me tangle the walls! If you'd like to be part of the Art Tribe, I'll let you know really soon how that will work. Still trying to decide if I should do a Kickstarter - I've just been so busy with Science comics I haven't had a chance to think it through. It's getting there though...

Oh! And that good looking... guy... creature... Boodle... is a paper-mache creation from a picture book I wrote and illustrated as my Senior AP Art project in High School! OMG. His name is Benji Boodle and I'd been meaning to redo his book for, ummm, a very long time. Turns out that at some point I actually started reworking it, but I have NO memory of doing it. Must have been when I was pregnant with Lilah.

My Mom had kept Benji through all her moves and he recently moved back home when Mom moved off to Bar Harbor a few weeks ago.

Welcome back, Benji! He is also, officially, the second Artist-in-residence at The BeeHive.
Posted by Sandy Steen Bartholomew at 9:42 PM 2 comments:

Back in October, I was contacted by one of my teachers, Luke Howard, at the Center for Cartoon Studies to see if I'd like to participate in The Secret Berlin Project. He wanted to celebrate the completion of Jason Lutes' epic comic, Berlin, which had taken 20 years to complete! Jason was another of my teachers at cartoon school and a fellow classmate (many, many, MANY years ago!) at Rhode Island School of Design.

I was honored and excited to be a part of this Secret Undertaking as Jason had been the teacher who had influenced me the most. He put so much extra attention into his class presentations and pushed us students to dig deep. He took time to meet with me and argue about school, family, publishers, or whatever I was obsessing over at the time. And, most importantly, he helped me cut and assemble the boxes that held my Thesis comics (Begin Again). ;-D

Major admiration aside, this project was really HARD!!

We were each assigned one random page from the first 6 issues of the comic. Our task was to recreate the page (not changing the text or intention)... in our own STYLE! Yowza! It's not easy to "redraw" the work of a master!

I agonized over it for a few days until my daughter, in her typical "mini-art-director" fashion, started to comment on what she thought were mistakes and bad design. "But what does that MEAN?!" and "the weird guy is just talking, he's not doing anything," and "it's the same picture of a weird guy from different directions..."

Here's the original page that I was assigned:

Huh. Yes, she was kind of on to something... What would Jason do? and more importantly, if I was to interpret the page in MY style, What would I do?

As we analyzed the page, I jokingly said, "that weird looking guy looks like my bride-of-Frankenstein Lilah Bean! But with five o'clock shadow and a cigarette!!"


And then we KNEW that we had a plan! Lilah (my mini-art-director and layout artist) sketched out the panels with her vision and interpretation of what the typed text really meant. I had the idea for the final panel, with the newspaper-reading-Lilah-Bean-editor-guy sitting on the pile of stones. I contacted my son who speaks a gajillion languages, and he told me how to write "pile of stones" in German, for the paper's masthead. I did all the inking, coloring and lettering. 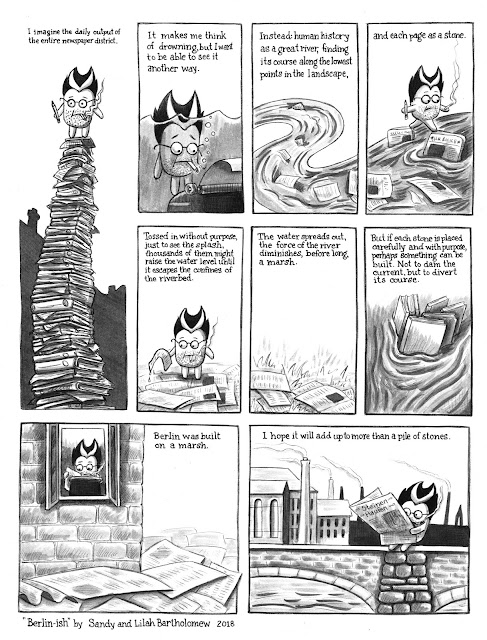 Well... it's definitely recreated in my style.

It was agony to wait to see everyone else's pages - and to keep it all secret! But the original artworks were collected from 159 artists and bound into huge volumes housed in a handmade wooden box - and presented last week (at the graduation dinner) to Jason. I think he was pleased...

The complete hardcover collection of Berlin comes out this fall, but you can still get the individual issues on Amazon (and other places), as well as Jason Lutes' other graphic novels.

Posted by Sandy Steen Bartholomew at 12:03 AM 2 comments:

I've been sick in bed for two weeks, but I did get one day off to bring some more Stuff to the new Studio in Concord. And my door had a beautiful new sign! 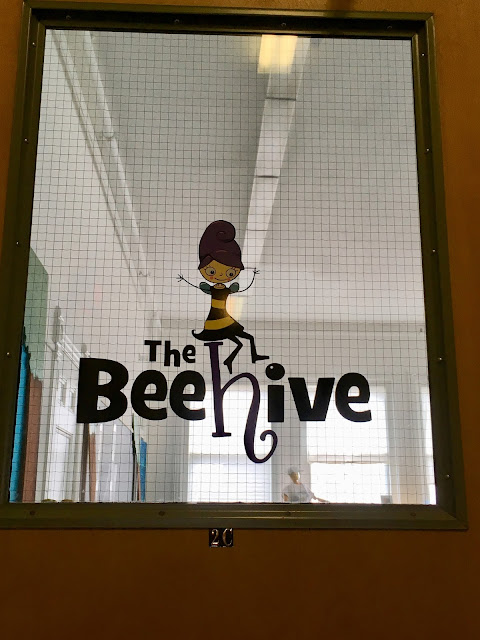 Here's a closer view of it with the studio behind  it... 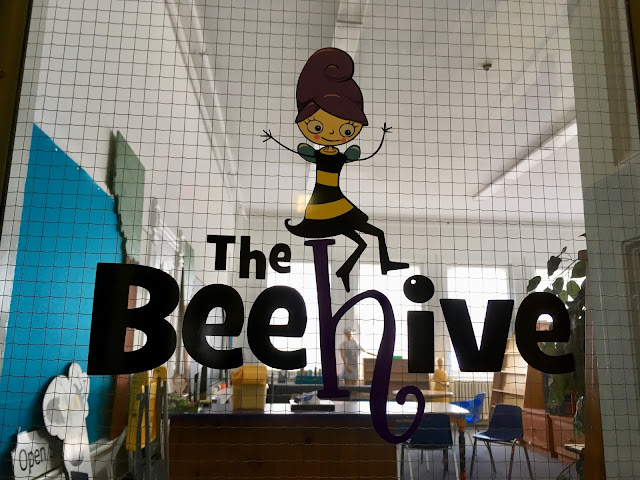 I was blown away by all the detail that Christa was able to put into it - each color is another layer of vinyl! This sign, and the previous Bumblebat sign, were both cut by Christa who runs The Place. The Place is now one of my neighbors since I am on the second floor at the Concord Community Arts Center!

When I'm feeling a bit better, I promise to plan an Open Studio so you can come see for yourself how COOL all these studios are!
Posted by Sandy Steen Bartholomew at 2:53 PM 2 comments: