"Cheer up," she said, "things could always be worse."
So I cheered up... and sure enough... things got worse.

I'm not going to whine about stress and panic attacks (at least not in this post), but I do keep working myself into a tither trying to "figure stuff out" and "make everything work". But when it all shakes down, I never seem to pick the right thing to worry about.

I've been distracted these last two days from my plans to get the new Studio open - by two new really big opportunities - which will have to go in another post. So - distraction upon distraction and I can't seem to focus, make any decisions, or get people to respond to me.

My daughter kept coming up to my studio to see if I would come watch tv with her and she started to lay in the guilt "Can't we do something interesting together?"

Eventually, we're relaxing on the couch, watching the Flash on TV (my mind is still doing research on my computer and trying to work stuff out...) and the bad guy, on TV, is releasing deadly gas into the police station... my Mom says "Do you guys smell something? Is something burning? The toaster? What is that?"

And then we are all running around sniffing... the basement, the attic, every single room... and suddenly my head is throbbing and I have to get out! Mom said she was having trouble breathing and she was going to call 911. My kid and I threw on our sneakers and went to take a walk and clear our heads.

The fresh air felt good, but I couldn't think straight. As we came around the first corner, we saw the lights of an ambulance go by. As we rounded the second corner we saw two fire trucks with the ambulance, and then a few more in front of my house: 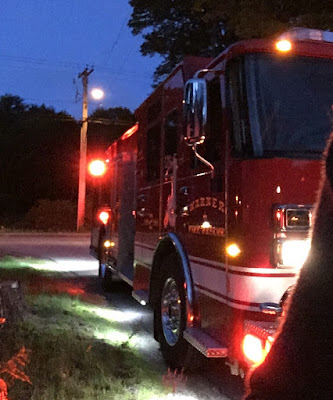 It was really weird and disturbing to walk home past all our neighbors and the big, glowing trucks.
This was as close as they'd let us go: 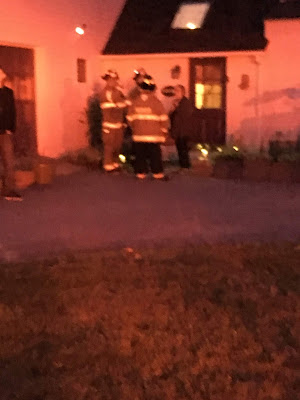 They made me go to the ambulance to be checked because of the pain in my head. I remember thinking how strange that was. I've spent so much time in hospitals and yet this was the first time I'd been in an ambulance. Then they brought my mom in and things took their usual turn. She's a retired medical examiner and particularly chatty with firemen and police. By the time Lilah joined us (she was fine, just wondering what happened to us), we were all laughing hysterically.

They scoured the house and suggested I have all the electrical work and the heating system checked out... damnit... that's bad timing... (but I promised not to whine). They did find some very scary, melted lightbulbs, but I still have no idea what actually happened. My mom started to suggest some terrifying scenarios.

I preferred the hysterical laughter. I commented to Laurie, "If I'd known we'd be surrounded by 50 good looking firemen - I'd have taken a shower and put on some real clothes!"