Lilah and I headed down to Nashua on Sunday to roam around the Kids Con comic convention. She had her "Go Away So I Can Read" t-shirt I designed for her, and I had on my Lego Batgirl Earrings and my comic leggings:

Yes, my mom actually asked me if I planned to wear them out of the house! It's a Comic convention! Where ELSE would I wear them?!

It was chaotic and colorful and serious overwhelm - but SO fun! 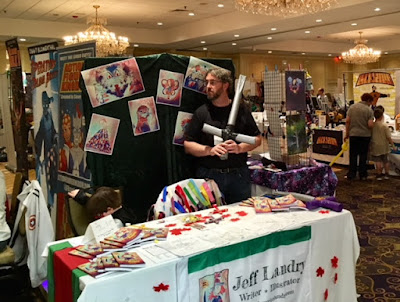 I really prefer walking around and "networking" to standing behind a table all day. I had made some flyers to hand out - I'm trying to get a comic creators group started at my studio in Concord: 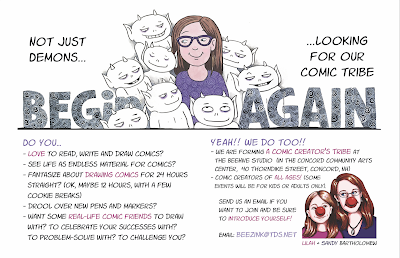 And we talked to a lot of really cool people! Many live in Massachusetts or New Jersey - so they probably won't join our club, but I kept all their biz cards (which are amazing too!):

I'd show you some photos of the comics, books, and prints that we bought - but they are already dispersed around the house!

If you want to hang out and talk to cartoonists - don't forget - this Saturday is the Non-fiction Comics Mini-Fest in Middlebury, VT.
Posted by Sandy Steen Bartholomew at 11:31 PM