Sketch of a Sketch-note

I got distracted by a bunch of things so I didn't post this right after the Graphic Medicine Conference this weekend - as I had planned.

I was photographed while sketching David Macaulay's Keynote Presentation on Saturday at Dartmouth - and thought you might like to see a little of the progression:

Since I had a lot of lectures to sketch-note and little time between, I composed a template ahead of time with very pale gray lines to help keep me organized. I also made a page for each lecture with the title, the presenter, and any subtitle, also in pale gray - so I wouldn't mess up the spelling. I inked over the pale letters just before each lecture: 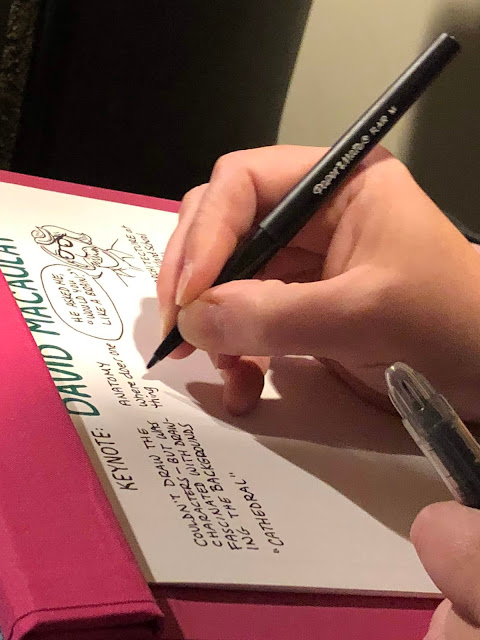 I like to draw a quick cartoon of the presenter and put any really good quotes in speech balloons. I don't draw them ahead of time as they tend to look really different in person than in their promo photos!

It's really intense! You have to pay very close attention to what is being said and interpret it quickly. No time to doze off or let your mind wander.

I like to use a black Flair pen and a colored Flair pen as well as a cool Japanese brush pen that has black on one end and gray on the other. I work on a magnetic portfolio/clipboard... usually on my lap! 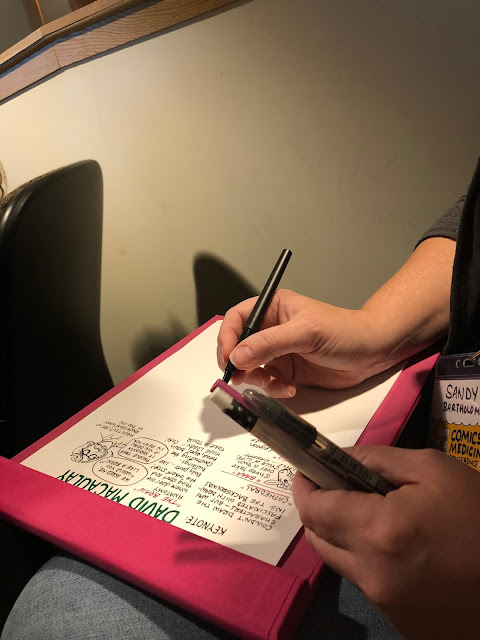 One of the most difficult things is planning! Some presenters cram so much material in - it barely fits and you have to leave stuff out when you run out of space. If someone doesn't fill the page, that's easier - I just add some more graphic elements to fill the voids. 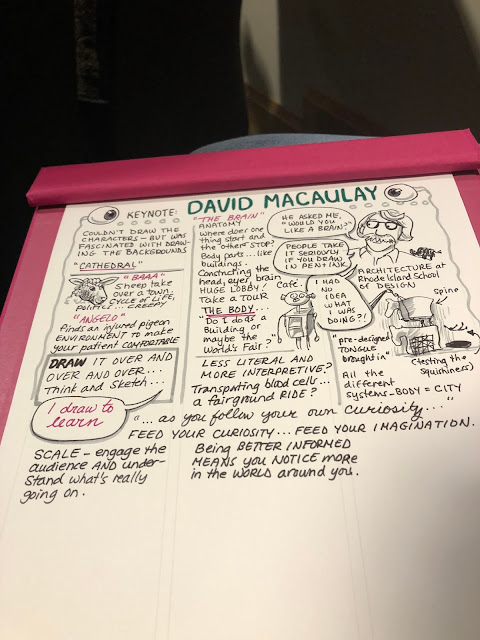 Then I add the grays for shading and contrast. It also helps divide up the space and the information and make it easier to read. Borders hold it all in! 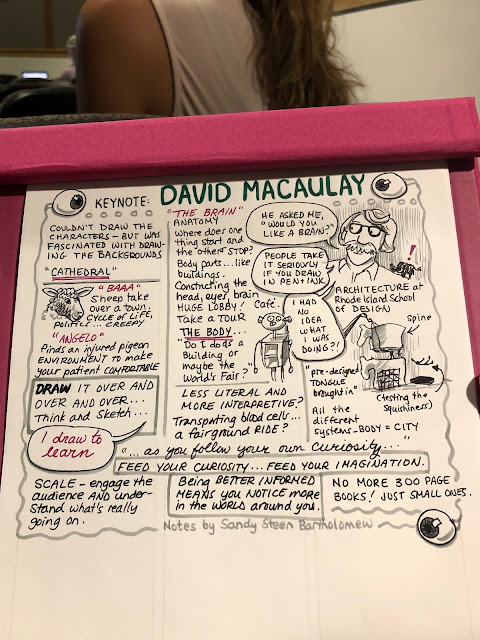 Since he is one of my heroes, I also wanted to show you some of David Macaulay's work in case you aren't familiar with it. I think he is best known for these two books: 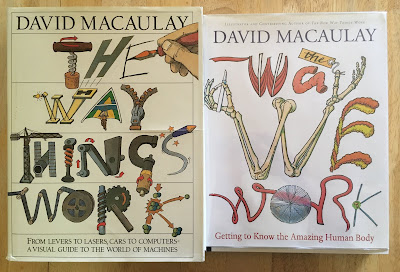 And they were the focus of the Graphic Medicine talk.

He's a genius at showing how architecture works too - Cathedral and Underground are classics... 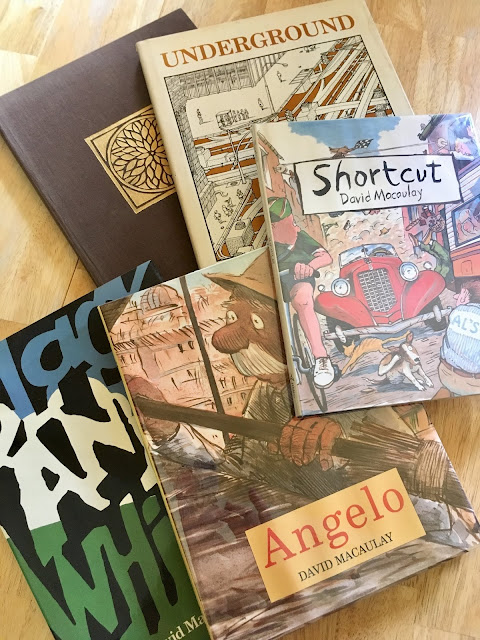 And he has lots of picture books too.

My absolute favorites are Motel of the Mysteries (Discovery of Tutankhamun's tomb parody!) and BAAA (people are sheep... but what if sheep were...people? Spoiler, it turns out badly).
My copies are so old the glue has let go and the pages are falling out! 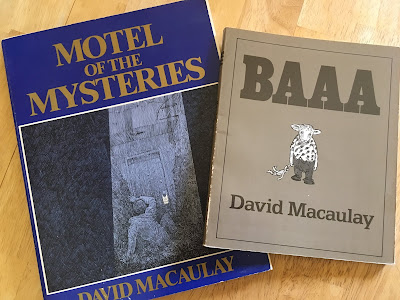 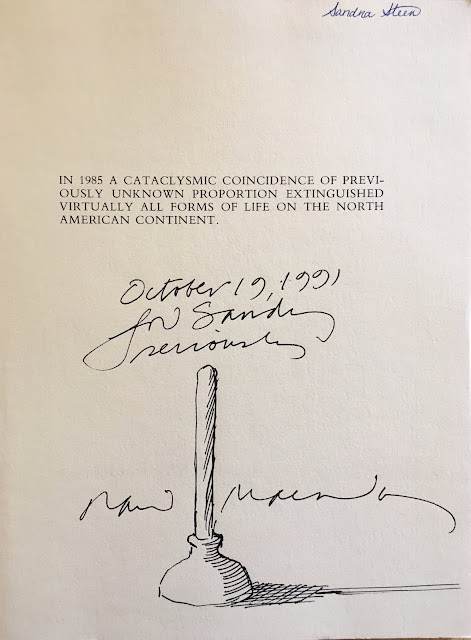 I was a student at RISD and David Macaulay took over as the Head of the Illustration Department. 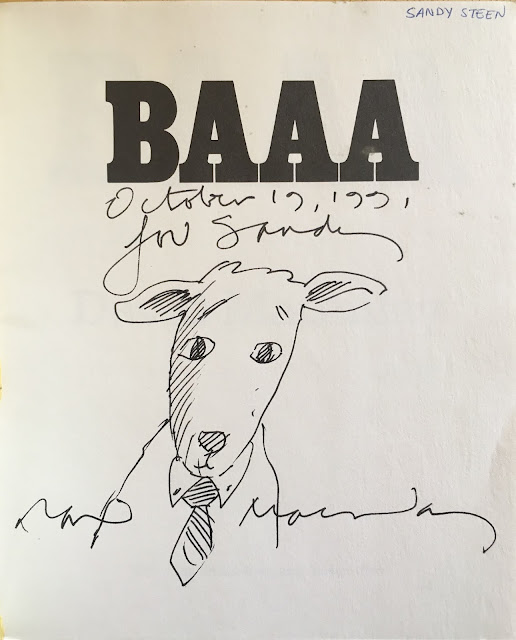 I had already been at two colleges and hadn't been able to convince any schools to transfer my credits. I was beyond discouraged and tired of being in school (5 years at three colleges!) David took a look at my transcripts and said "Want to graduate with the Seniors this Spring?"
"I love you Mr. Macaulay."

It took me 25 years to go back to school (for my Masters) and finally do school properly. And I ran into David at the Center for Cartoon Studies a few years ago.

I've always been grateful to David Macaulay for releasing me from the academic world and for showing me how warped and ingenious kids' books could be!
Posted by Sandy Steen Bartholomew at 4:29 PM