This has been an incredibly intense week... actually, the whole month - if I count the graphic medicine conference and everything. I didn't have time to recuperate or recharge before I tripped over the zip line and went flying down the mountain again.

Deciding to leave the big studio in Concord, packing, moving, Selectmen's Meeting, tons of meetings, legal threats, researching the legal threats... I lost track of how many people yelled at me this past week... what's up with that? Why do people think that is OK? If I wore lipstick, my lipstick case would be covered with notches for all the people who hate me right now.

And the worst part is that my mudroom, my music studio, my garage and now a 10x10 storage unit - are all jam packed with STUFF that I don't know what to do with!? (Yes, my OCD/CDO is so overwhelmed I just stare at the boxes)

And with the kid in Middle School, I have to get up 2 hours earlier than is biologically possible for me - so I'm running on fumes. (I work at night because I can concentrate better and there is less visual distraction).

And I have to get focused on my fall illustration projects - because surely all the Wingdoodle insanity would have been finished by summer's end. Right? RIGHT?!

I have ONE thing that is on my side right now - and I have to try NOT to screw that up too.

I got a little bit of sleep last night, finally. Lilah and I had worn ourselves out at Montshire Science Museum yesterday. Then we had a yummy dinner with my guy. Then we all couch-potatoed for hours (Pitch Perfect 2 and Lemonade Mouth). Then keeled over for at least 6 hours of sleep. Aaaaaahhhhh...

I had a strange dream that someone whispered, "two have M&Ms in them... warming in the oven..."

Some time later, I was woken up by Lilah saying, "Bill left you a present on your stairs! I'll TRY not to step on it! Get up get up get UP!"

I was picturing a mouse or something, until I remembered that Bill is not a cat.

Nevertheless, I was still expecting something messy. "A present left on... x..." is a euphemism. Like saying a house has "charm and potential..."

I think I'm just worn out and descending into Cynicism.
(Which is why I'm trying so hard not to screw up that ONE thing that is right in my life.)

I stumbled across the studio and almost fell down the stairs! 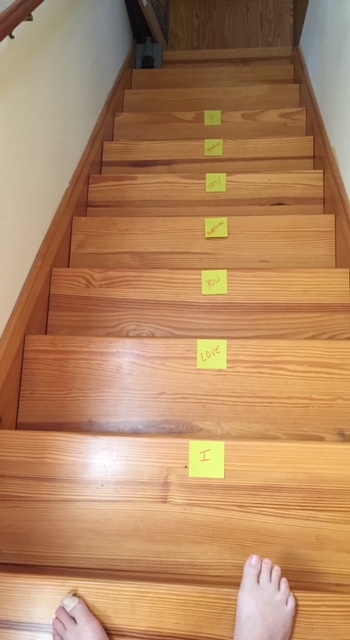 I thought that was the sweetest thing ever until I saw...

...there really were pancakes for me and the kid. 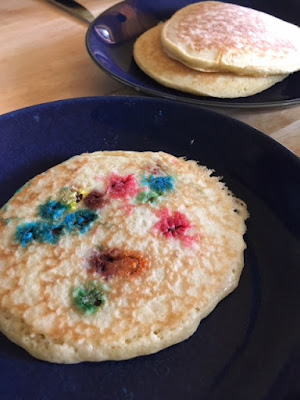 And they were still warm.

Posted by Sandy Steen Bartholomew at 11:53 AM