OK! I actually DID IT! I've been trying to get this Kickstarter project kicking since.... December!

This is my sixth Kickstarter so it shouldn't be so scary, but I think with all the medical stuff, I just haven't had the energy to spare - until now.


I plan to write more and tell you interesting things - tomorrow - right now, I am incredibly exhausted and need SLEEP! But I just wanted to let you know that there is an "Early Bird Special" on one of the Rewards. You can get both the Quo Vadis comics, the ArtGenda Sketchbook, and the prints - for $50 (save $15) -- but only through Monday night. Then the Special disappears!

Click on the image below, and then scroll down the Rewards list until you see this one: 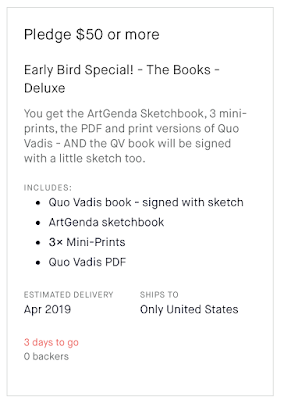