Bill was up at the Flying Goose Pub in New London, NH and texted me this amazing sight! 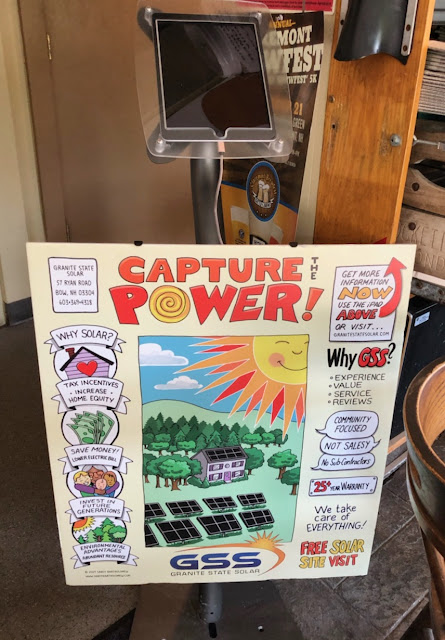 It's the poster I designed for Granite State Solar!

I had gone to a Solarize Kearsarge meeting this spring and decided this was the perfect time for me to solarize my house. I had drawn these sketch notes at the meeting: 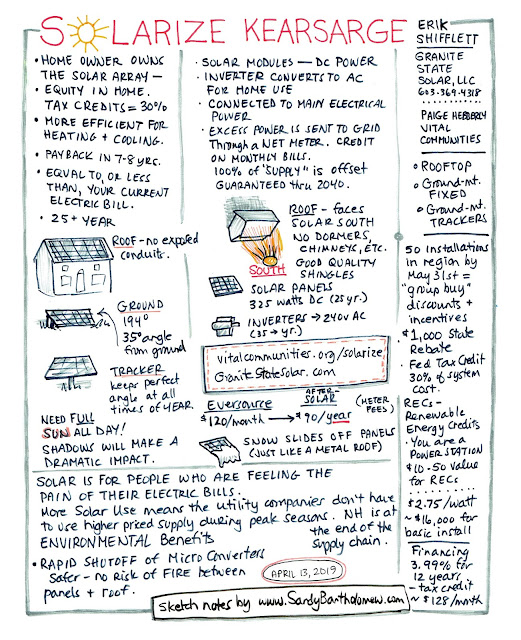 ...and I showed them when I signed my Solar contract. I got a better reaction than I had expected - and I got a project to work on!

The assignment was to design a large poster that would go on an iPad stand in the front entrance of the pub - and grab attention so folks would want to learn more about Solar panels. (The Flying Goose is solar-powered).

The original design I created was modeled after a comic book cover -- I was thinking --- bar, get attention, attract a younger audience... 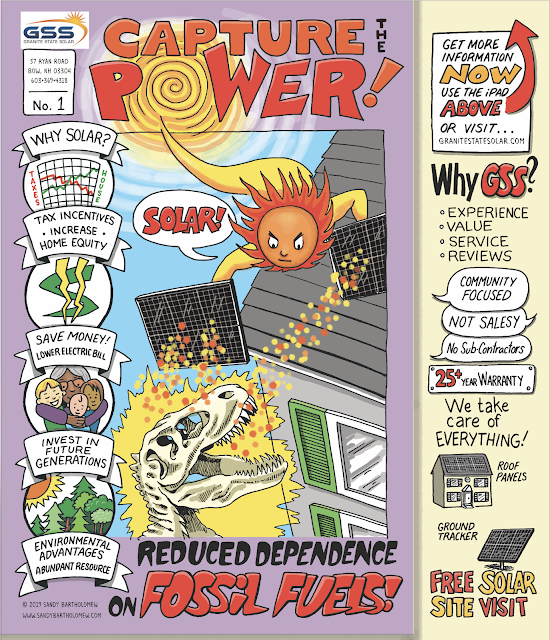 But I think it was a bit TOO... all that. The central image was too controversial and they preferred something gentler. Friendlier. So I redid it like this: 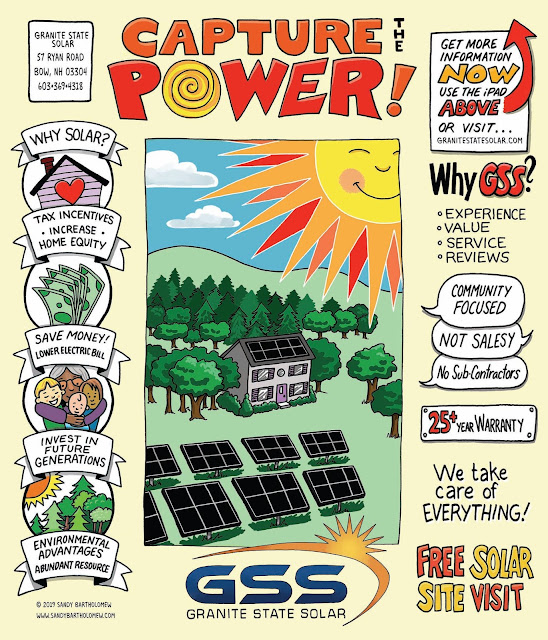 The central image is basically what you would see looking out the pub's dining room window... a solar array and Kearsarge Mountain in the distance.

I like it. And now I have to go visit it in person! If anyone else needs an excuse to go to the Flying Goose, I hope you'll join me!

Posted by Sandy Steen Bartholomew at 5:51 PM No comments:

The final assignment was to design our cover!?! That does seem weird to do the cover last, but now it makes sense.
I thought designing the last page was really hard, but this was worse. It took me two hours to think what it should look like and what to use as a title! I ended up using the same layout as for the Ostroboglin page and had the shadows of the Demons mimic the shape of the clouds in front.
As for the title... I searched all potential ideas on Amazon- that was illuminating! If I used a particular word in the title, what other books would show up when someone searched for it? Were those my potential readers? Um, no. I elimated anything with “Demons”. I eliminated all versions with “glitch,” “glitches, glitching....etc.” Also nixed “Begin Again.” Although appropriate, that belongs to my comic magazine series. I realized this story is ultimately about MY relationship with... myself.
FINALLY, I decided to use the original title from the first mini-comic, “We Will Never Leave You”.
We spent this last day of class in the rare book library at Dartmouth (one of our teacher’s husband is the librarian there) - comparing some very strange books and placing them on a chart - text to graphics, and fiction to propaganda. It was fascinating. One of the books we got to handle was from the 1500’s!
Leaving this workshop and group of people was really difficult. Coming home to my empty house was worse. All the grown up stuff I’d left behind (the stuff that makes me miserable and lonely) was waiting for me. Along with three different kinds of molds on the bread on the counter. Sigh. Yes, I could write a comic about that... but I will probably crawl into bed and watch Netflix until I pass out from exhaustion. 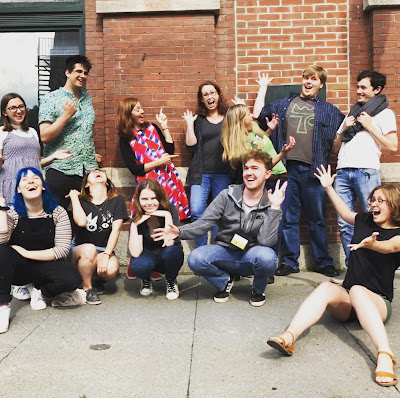 Today's in-class exercise was about Dialog. We were paired up and given two characters and commanded to create a comic that used dialog to show the characters interacting and changing in some way. Part of the challenge was brainstorming and working with another person!

This first one is the one I did with Hannah. We were given "Worried Salesman" and "Enraged Astronaut"! 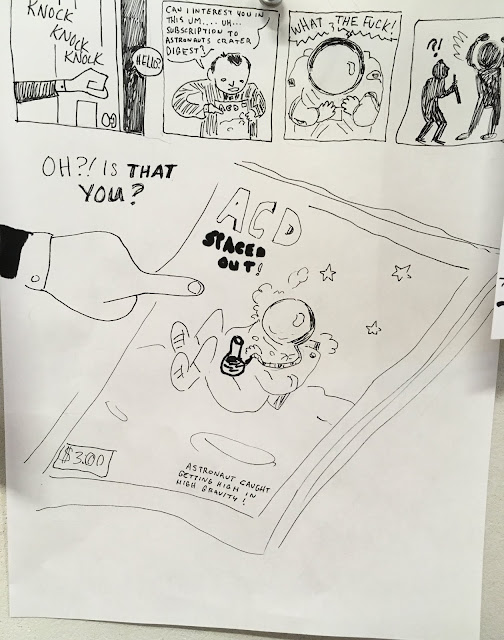 If you'd like to see the sketches I did today (actually, incredibly late last night!) for my Demons comic, take a look at my Patreon page here: https://www.patreon.com/SandyBee

Posted by Sandy Steen Bartholomew at 8:40 PM No comments:

As usual - I'm not working on the project I thought I would. I've been working on the Demons, and their new friend(?) and other stuff from inside my head. I am so so so tired! But I don't want to go home and lose this momentum and unlimited possibility. I've been posting some of the group projects here on my blog, but I'm only putting the personal comics on my Patreon site. https://www.patreon.com/SandyBee/posts

Today's group exercise was a hoot!

We each folded a sheet of paper in half (the long way). Then wrote a sentence at the top, ie, I wrote "Mickey Mouse eating Nachos." (See the second strip in the picture below).

We each handed our paper to the person to the right of us and they drew a picture of what we had written.
Then that person folded the text part over so it couldn't be seen, and handed it to the next person.

That person wrote a detailed description of the image, then folded the image over so it was hidden, and handed it to the next person. This continued on, alternating between image and description until the paper was filled.

Here are all the strips, unfolded. It's a bit like that game "Telephone." A few of the strips stayed remarkably on track, most others went... wrong... in hilarious ways! 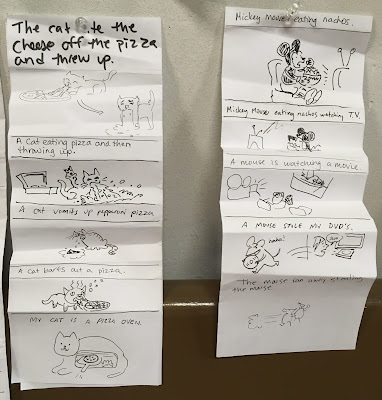 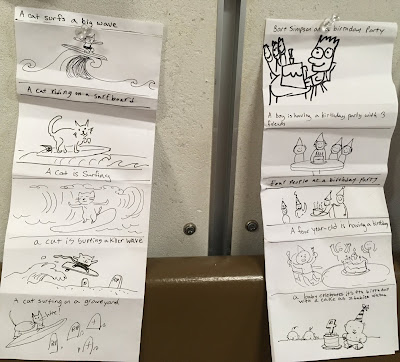 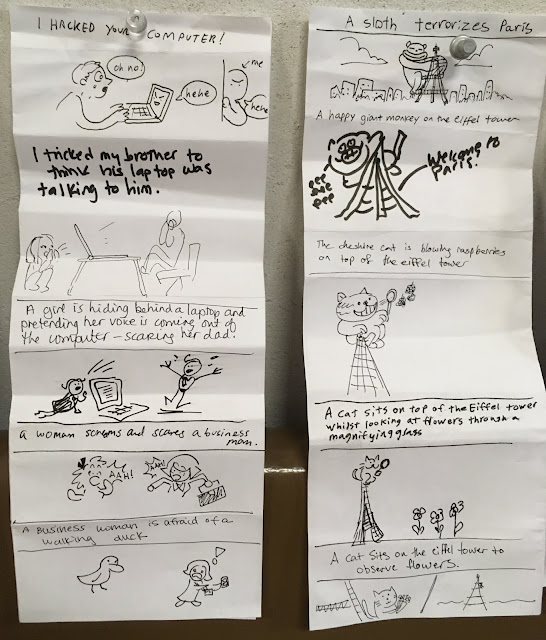 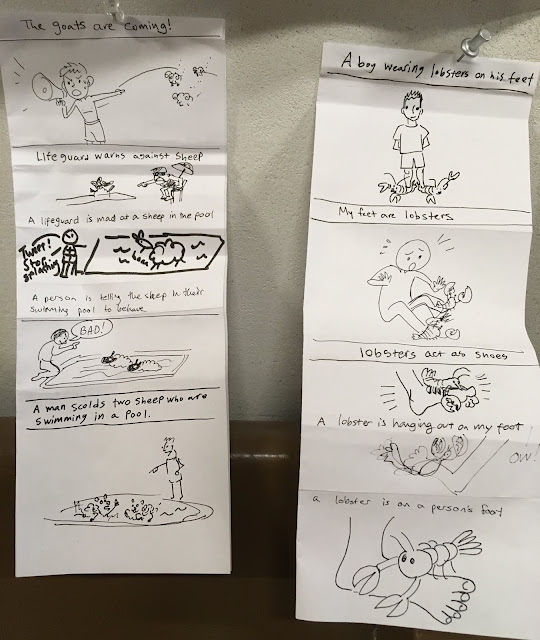 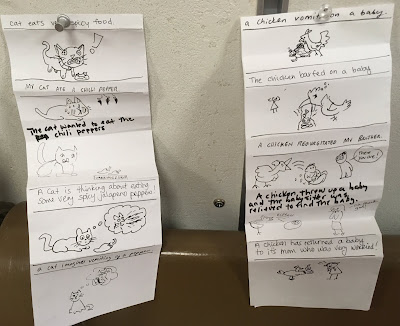 Posted by Sandy Steen Bartholomew at 6:23 PM No comments:

This was a fun, exhausting exercise we did in class today! If you'd like to see what I've been drawing for my personal projects, take a look at my Patreon page.

Each student got a large sheet of paper that was divided into twelve sections (we have 10 students and 2 teachers).

Each person had two minutes to draw the beginning of the comic in the first box.
Then each paper was passed to the person on the right, who drew the next panel in the comic.
The process was repeated until the papers each returned to the original person, who drew the final panel of the comic.

Some of these got REALLY bizarre! Enjoy!


Posted by Sandy Steen Bartholomew at 5:35 PM No comments: 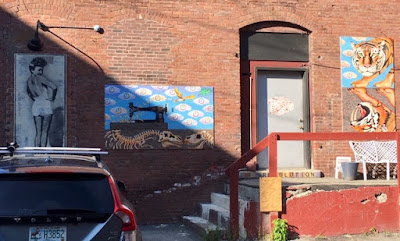 It feels really good to be back in White River Junction, VT! There's so much inspiration all around the town. Even the alleyways have art!

I'm taking the Young Adult Graphic Novel Workshop with Tillie Walden and Jo Knowles. This is a very sketchy comic done in about 45 minutes that interpreted the first page of SPEAK by Laurie Halse Andersen. 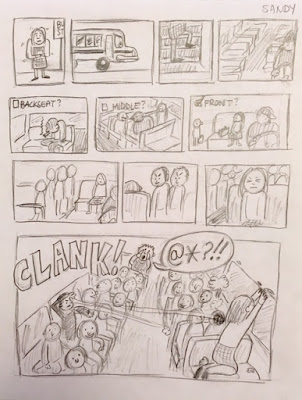 I've been posting this kind of behind-the-scenes stuff, sketch-notes, and the more personal comics - on my Patreon page. It's a membership/subscription page, but that means I can post material that doesn't feel appropriate to let loose unsupervised onto social media.

If you'd like to see what I'm working on, I encourage you to become a patron here: