This Sunday is my 50th Birthday and I'm making a really big deal about it. A few people have thought it was weird in general that I even still celebrate birthdays. Or that it's strange to celebrate a birthday since we don't actually DO anything to deserve them - our Moms' should have parties, since they did all the work. Fair enough.

I've always thought of it as a celebration of having survived another year. Just as many folks party to welcome in the New Year - fresh and clean - I think of Birthdays as a way to mark the year like, "PHEW! That was close! But I made it!"

I feel the need to explain further.

Here's a comic I drew a few weeks ago (for a graphic novel I'm working on about mental health): 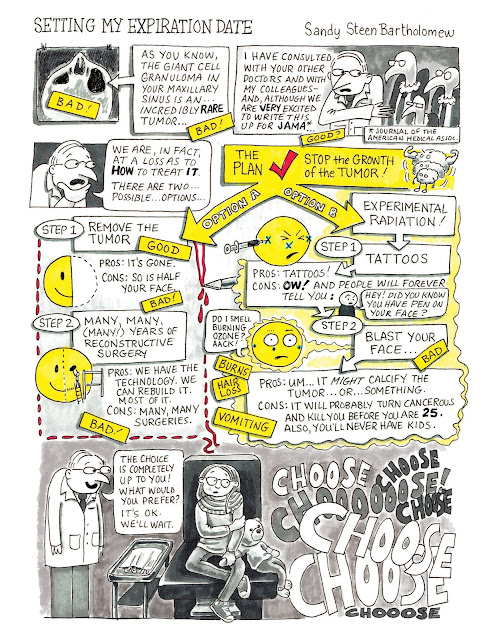 When I was about 11, doctors discovered I had an extremely rare tumor that they didn't know how to treat. It wasn't quite cancer, and yet, it was growing. (I learned many years later, that the growing mass had smashed all the bones in my orbital floor). I had a bunch of biopsies and tons of CT scans - but then I had to decide between two unlikely methods of treatment (see the comic above). I chose the experimental radiation. It was very new at this time and had way more CONS than PROS. But an Expiration Date of age 25 was still more than twice my age.

Despite being very sick during and after treatment, losing a lot of my hair, eyebrows and eyelashes (a nightmare in middle school), lots of vomiting and nosebleeds, and missing more than 30 days of school in one year... I still somehow managed to set some very high level expectations for myself. I didn't sit around waiting to die when I turned 25, but I also didn't ever imagine anything that might come after. I didn't imagine getting older. I was told I wouldn't be able to have kids - so I didn't imagine having a family. And in between bouts of depression, every illness that was sneezed at me (I'd lost my immune system), all kinds of weirdness in my body, and a constant fear of letting people down --- By the time I turned 25 --- I had traveled all over the world including Egypt (twice), Japan, England, Italy, Mexico..., I had had my photographs exhibited in galleries, attended Philadelphia College of Art, Brown University, the School of Visual Arts, and Rhode Island School of Design. I'd worked as a cartoonist and an exhibit designer at the Children's Museum of RI, and I was working towards getting my kids' books published. I was also married and had my own home.

Well, that's not true, there were always crazy things happening. But I didn't die. Instead, my beloved cat, Gustas Silvertip, who I'd had since I was 8... HE got the same tumor that I'd had! In a very similar location. The vet was able to remove some of it and he lived a few more years. In fact, he died just a few months before my son was born - Gusty was more than 20 years old!

What happens when you survive?
Yes, I was happy to be alive! And I had a really cool (weird) kid! But I was walking through completely blank pages. I'd never imagined being 30! Then 35!? Then I decided I had one more kid to bring into the world, to defy the doctors... who no longer cared about my miraculousness. (Or perhaps, they were dead? They'd seemed pretty old when I was a kid).

So I just kept on pushing myself as I always had. Maybe even harder because I had no idea this time how long I would have. I started and sold a rubber stamp company, painted furniture, learned stained glass, PMC, got certified in a strange new drawing method called Zentangle, got books published, started a store, traveled to Germany, France, the Middle East..., got divorced, started over, went back to school for my Masters, started over, again...

And all this time, I was being diagnosed with new tumors in different locations. More surgeries. More healing. And each time, I wondered, "Is this the real deadline? It can't be, I'm not finished with all the new projects." And I pushed myself harder.

This past winter was one of the worst of the tumors. It was really unexpected and I'd been working so hard on getting in shape and finding a new relationship. It just seemed so incredibly unfair. Everything is worse when you think it's unfair! The surgery was awful and painful and the recovery took months and was awful and painful. And everything was unfair.

But... I didn't die. I'm still here. And the oldest of my kids-that-I-never imagined graduated from college this spring and is now a teacher. My youngest is in 7th grade and she sings and draws and writes. These two are probably my greatest achievements. And yes, I'm taking credit!! I created two amazing people who were not "supposed" to exist. And I was not "supposed" to still exist.

Now I am 25 years past my Expiration Date. I have used every damned extra year I've been given and every superpower I have (from the radiation?) to try and justify my continued existence. I have dealt with every insane medical, legal, and financial nightmare that's been thrown at me. And I have started over and over and over.

And I want a party.
I deserve a party.

So now you know.

And yes, I want chocolate, and whiskey, and Legos, and a couple of calm weeks in Ogunquit, but what I want the MOST for my 50th Birthday gift, is another 25 years.


Posted by Sandy Steen Bartholomew at 2:35 AM